Attorney Jesse Weber weighs in on if Charlie Gard should be treated in the U.S.

A British judge told the parents of terminally ill baby Charlie Gard Monday that they had until Wednesday afternoon to submit what he called "new and powerful evidence" demonstrating that their son should be kept alive to receive experimental treatment.

Judge Nicholas Francis set the deadline ahead of a second hearing planned for Thursday afternoon at the Royal Courts of Justice in London following a dramatic day in a case that has attracted the attention of Pope Francis and U.S. President Donald Trump, who tweeted last week that if the U.S. could help, “we would be delighted to do so.”

"There is not a person alive who would not want to save Charlie," Judge Francis said, according to The Sun newspaper. "If there is new evidence, I will hear it. If you bring new evidence to me and I consider that evidence changes the situation … I will be the first to welcome that outcome."

Charlie, aged 11 months, suffers from a rare mitochondrial disease and has brain damage. His parents, Chris Gard and Connie Yates, want him to travel to the U.S. or Italy to receive treatment known as nucleoside therapy, which has shown success in reducing the symptoms of some types of mitochondrial disease. 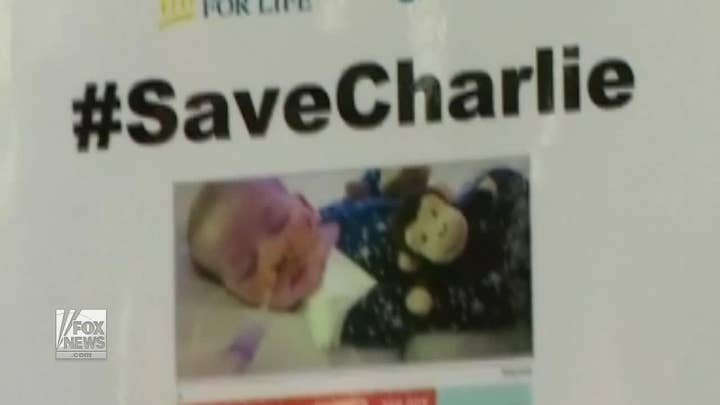 Standing in the way is London's Great Ormond Hospital and an independent guardian appointed to represent Charlie, who have argued that the infant's life support system should be switched off and he should be allowed to die with dignity.

The parents of Charlie Gard, Connie Yates and Chris Gard, as they arrive at the High Court in London for Monday's hearing (Nick Ansell/PA via AP)

Parents in Britain do not have the absolute right to make decisions for their children. It is normal for courts to intervene when parents and doctors disagree on the treatment of a child. The rights of the child take primacy, with the courts weighing issues such as whether a child is suffering and how much benefit a proposed treatment might produce.

Judge Francis had agreed with the hospital in April, ruling that Charlie had irreversible brain damage.

However, the hospital applied for Monday's court hearing because of "new evidence relating to potential treatment for his condition."

Grant Armstrong, representing Charlie's parents, said there was "encouraging" evidence from researchers at the Vatican's children's hospital about the experimental treatment.

Last week, New York-Presbyterian Hospital in Manhattan said it would "admit and evaluate" Charlie for treatment, providing that the baby could be transported safely to the facility.

"There are 18 children currently on this treatment," Connie Yates told Sky News before the hearing. "One of them wasn't able to do anything and now she's riding a bike."

However, lawyers for the hospital told Judge Francis they were struggling to find any proof that nucleoside therapy would help Charlie's condition. According to court documents, the treatment has never been used on either mice or humans with the suggested type of mitochondrial disease from which Charlie suffers.

Those claims prompted Chris Gard to interrupt proceedings and yell at one of the hospital's lawyers, "When are you going to start telling the truth?"

"They're lying to you," Yates added, addressing the judge.

"We're not saying Great Ormond Street is a bad hospital but they don't have a specialist for his particular condition," Yates had told Sky News. "We don't see what's dignified about him dying - we think it's dignified that he has a chance at life and if it doesn't work then we'll let him go."