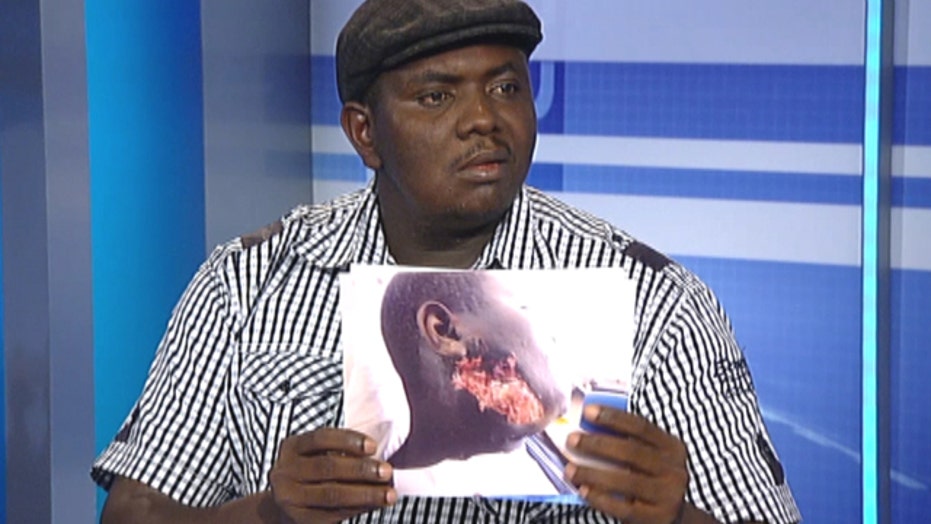 Uncut: Victim recounts how Boko Haram extremists attacked him in front of his wife and children just because he is a Christian and left him for dead, plus the plight of hundreds of kidnapped girls

ABUJA, Nigeri – There's no dancing in the streets, but people in the hometown of more than 200 kidnapped Nigerian schoolgirls are cautiously optimistic about news of a cease-fire with the Islamic extremists who abducted their daughters six months ago.

Community leader Pogu Bitrus said "people rejoiced, but with caution" after the military announced the cease-fire with the Islamic extremist group Boko Haram on Friday.

Even as the community leaders were speaking by telephone to The Associated Press, Boko Haram fighters were attacking another town in Borno state about 75 miles southwest of Chibok.

The militants struck the town of Shaffa first on Friday, the day the military announced the cease-fire, killing at least eight residents, wounding several more and putting hundreds of people to flight, according to residents who escaped.

On Saturday morning, as members of a civilian self-defense group were collecting the bodies of victims, the insurgents struck again. Many were killed, including at least one extremist, residents said.

Several villagers were beheaded in another Boko Haram attack Friday on Abadam, an isolated town on the border with Niger. Among the victims was the septuagenarian father of a local politician, resident Aminu Abdullahi said by telephone.

"Boko Haram have taken over Abadam. They ... hoisted their flags on Friday after killing many prominent people and forcing others to cross over to Niger," he said.

There has been no official announcement from Boko Haram of a cease-fire, and it could take days to get word out to fighters in the field split into different groups under various commanders. Communications in Nigeria are poor at the best of times. There are no landline telephones and often patchy cellphone service frequently is cut by the military in areas of operation.

In Chibok, the community leaders said people are skeptical of the government's cease-fire announcement because they have been disappointed too many times in the past by reports of progress by Nigeria's government and military.

Some reports said the truce includes an agreement to free the girls abducted from Chibok.

But government spokesman Mike Omeri would say only that authorities are "inching closer to the release of the Chibok girls." He said talks are to resume in Chad next week.

On Friday, French President Francois Hollande welcomed the "good news" and told a news conference in Paris that the girls' release "could happen in the coming hours and days." France has been involved in negotiations that led to the release of several of its citizens kidnapped by Boko Haram in Cameroon.

Neither Hollande nor Nigerian government officials gave any details.

Chibok community leader Bitrus said, "We are waiting, hoping that it is really true and that the people who negotiated on Boko Haram's side, that they are the genuine leaders."

Boko Haram — the group's nickname means "education is sinful" — drew international condemnation with the April kidnapping of 276 girls and young women from a boarding school in the remote northeastern town of Chibok. Dozens escaped in the first couple of days, but 219 remain missing.

Boko Haram had been demanding the release of detained extremists but Nigerian President Goodluck Jonathan originally said he could not countenance a prisoner swap. On Saturday, an official at the presidency said the current negotiations are about releasing Boko Haram members in exchange for the girls. He spoke on condition of anonymity because the matter is sensitive.

"Sometimes these people, they will say something and they will not act," said Lawan. "We just pray that this is true."