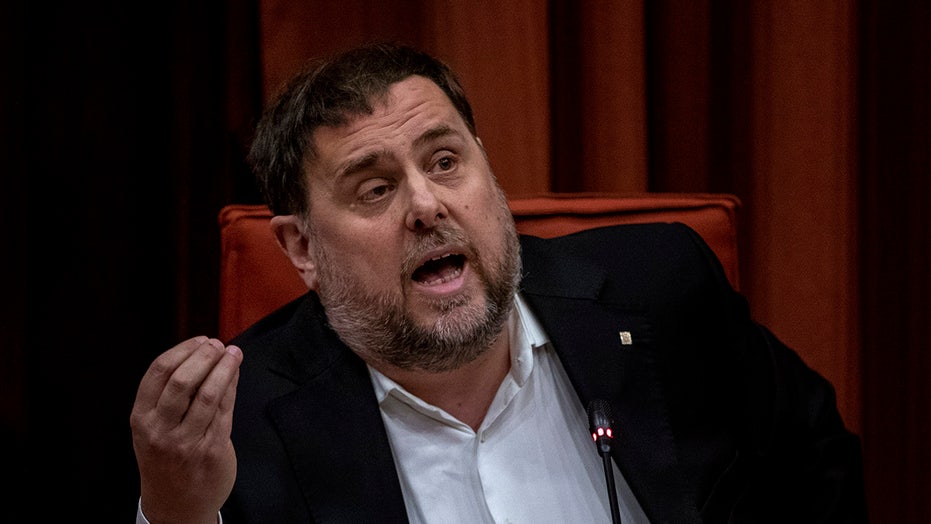 The former vice president of Catalonia and five other separatists sentenced to prison after leading an effort to secede from the rest of Spain in 2017 made their first public appearance since their conviction Tuesday, when they were called to testify at a regional parliament hearing in Barcelona.

Catalonia’s separatist government authorized the former vice president, Oriol Junqueras, and five former Cabinet members leave prison for the day. They are to testify in an investigative commission regarding Madrid’s decision to impose direct rule over the semi-autonomous region in northeastern Spain, following the 2017 separatist crisis they spearheaded.

Catalonia's ex-regional vice-president Oriol Junqueras speaks at the Parliament of Catalonia in Barcelona, Spain, Tuesday, Jan. 28, 2020. Six former members of Catalonia's regional government have been escorted from prison to attend a hearing at the regional parliament in Barcelona. (AP Photo/Emilio Morenatti)

Junqueras, who is the main defendant Tuesday, was sentenced to 13 years behind bars after Puigdemont fled to Belgium to escape prosecution. The Spanish Supreme Court convicted Junqueras, the five former Cabinet members and three colleagues of sedition and misuse of public funds in October 2017, Local 10 reported.

The six were not handcuffed Tuesday, and no uniformed guards were escorting them, although police were deployed outside. Regional president Quim Torra and the speaker of the house greeted them with hugs and warm handshakes on arrival. 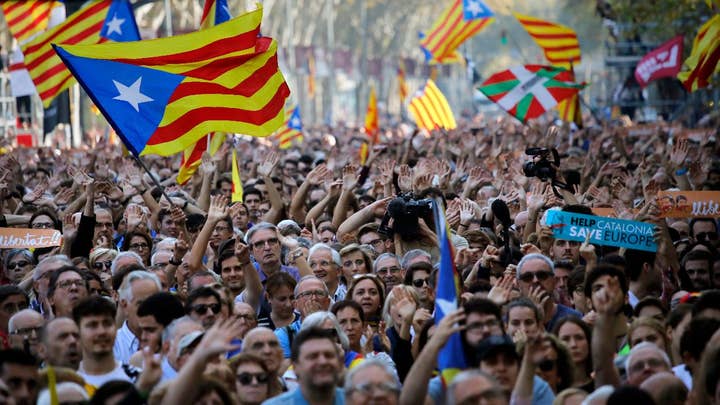 Junqueras then used most of this half-hour appearance to insist that he and his colleagues are unjustly imprisoned and that the solution to the political crisis provoked by the separatist movement is dialogue with Spain’s central government and unionist parties.

“Nothing we have done is a crime, because holding a referendum is never a crime,” he continued. “We are convicted, we are in prison, but will continue to fight to build a better country and a society that is more just. And to do it with all the tools of our own state.”

Catalan politician Oriol Junqueras, centre, arrives at the Parliament of Catalonia in Barcelona, Spain, Tuesday, Jan. 28, 2020. The imprisoned leader of the Catalan separatist ERC party Oriol Junqueras and five other former regional Cabinet members who pushed ahead with an illegal independence declaration for Catalonia in 2017 are brought out of prison for the first time to testify at a regional parliamentary committee. (AP Photo/Emilio Morenatti)

This comes after Torra lost his status as a member in Catalonia’s regional parliament Monday amid tensions between Catalonia’s two main separatist parties, JxC (Together for Catalonia) and the ERC (Republican Left of Catalonia).

Torra became regional president in May 2018 leading a coalition between the two parties. In November, a Barcelona court accused him of “disobedience” for refusing to remove separatist symbols from buildings. He was ordered not to hold public office for 18 months but appealed the decision.