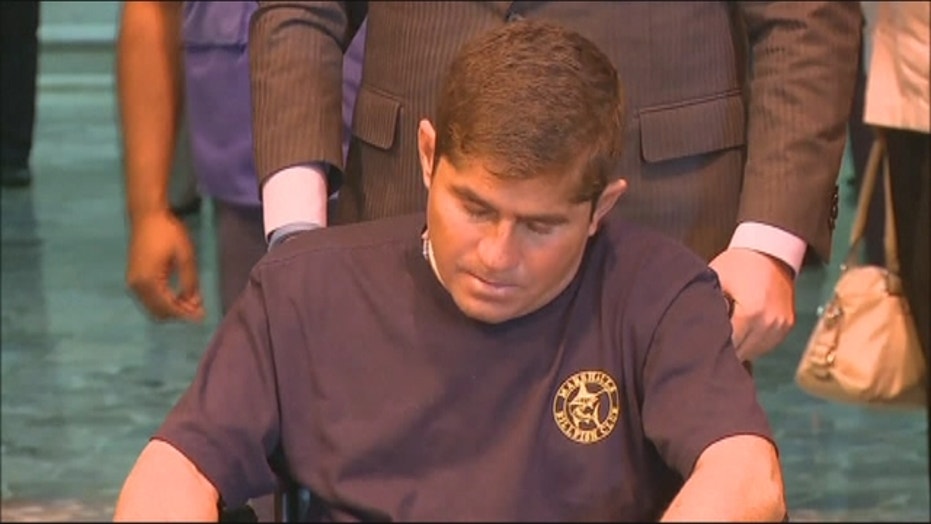 A fisherman who says he drifted at sea for more than a year has finally made it home to El Salvador, exhausted and speechless.

SAN SALVADOR, El Salvador (AP) – A fisherman who says he drifted at sea for more than a year has finally made it home to El Salvador, exhausted and speechless.

José Salvador Alvarenga tried to address a media throng waiting at the airport, eager to fill in details about what many people have viewed as a fish tale: a man tossed 6,500 miles (10,500 kilometers) across the Pacific in a small boat from Mexico to the Marshall Islands, surviving on raw fish, turtles and bird blood.

But when handed the microphone at the San Salvador airport late Tuesday, Alvarenga could only put his hands to his face, appearing to cry.

Wearing a dark blue T-shirt, khaki trousers and tennis shoes, the 37-year-old left the airport in a wheelchair and was taken by ambulance to the National Hospital San Rafael, where he was greeted by a daughter who didn't remember him and a mother who had thought he was dead after not hearing from him for years.

Dr. Yeerles Ramírez described the reunions as emotional, and said that according to medical tests so far, "the prognosis is very good."

As he was unloaded from an ambulance, Alvarenga tried again to answer questions shouted from the crowd. How do you feel? "Happy to have arrived," he said.

Alvarenga's story stunned the world when he washed up on the Ebon atoll almost two weeks ago, appearing robust and barely sunburned after more than a year at sea. But he had started out a much larger man, and doctors found that he was swollen and in pain from the ordeal, suffering from dehydration.

The journey back home after a week of rest and medical treatment in the Marshall Islands capital of Majuro was marked by long layovers in Honolulu and Los Angeles, where doctors checked his health and ability to continue the trip.

"I'm so happy to know he's alive, that he returned. I want to give him a hug," said Emma Alvarenga, an aunt who arrived at the airport to see him but was left outside the VIP lounge where he was taken.

His father, José Ricardo Orellana, 65, who owns a store and flour mill in the seaside Salvadoran town, has said his son first went to sea at age 14. "The sea was his thing," Orellana said last week after learning of Alvarenga's story.

His 14-year-old daughter, Fatima, has made an archway of palms for the front door of the family home in the fishing village of Garita Palmera and hung a sign proclaiming "Welcome." She didn't remember ever seeing her father, who left El Salvador to fish in Mexico when she was just over a year old.

Alvarenga's incredible tale left many skeptical, but experts said it would be humanly possible for him to survive.

Over several days, details emerged that seemed to corroborate the horrible journey.

Alvarenga said he worked in a fishing village on the Pacific coast of Mexico's southern Chiapas state, where he embarked. A man with his nickname, "Cirilo," had been registered as missing with civil defense officials there. They said a small fishing boat carrying two men, the other named Ezequiel Cordoba, disappeared during bad weather on Nov. 17, 2012, and no trace of them or the craft was found during an intense two-week search.

Cordoba died after about a month when he couldn't eat the raw fish and turtles, Alvarenga has said.

Photos from the Marshall Islands published by Britain's Telegraph newspaper showed the boat that Alvarenga purportedly arrived in. It bore the hand-lettered name of a Chiapas fishing cooperative, Camaroneros de la Costa, for which Alvarenga said he worked in Costa Azul near Tonala.

The photos also showed a large plastic cooler that Alvarenga purportedly used to shelter himself from the sun and sea.

"The story of Jose is one of faith, but also of a fight to live," the foreign minister said Tuesday night. "A story of solidarity and reunions."