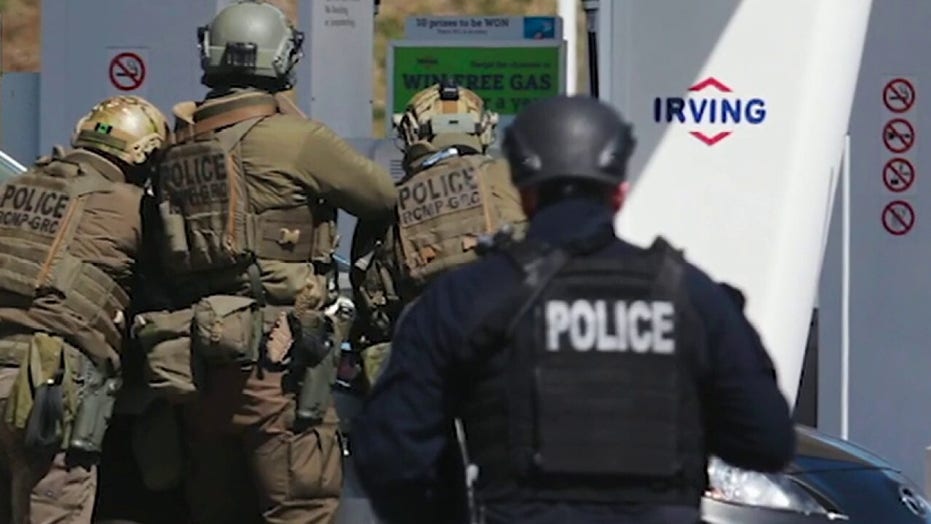 Friends and family members have begun to identify some of the victims of the deadliest mass shooting in Canada's history, including health care workers, correctional officers, a teacher, a police officer and a military veteran.

Late on Saturday, a gunman disguised as a police officer went on a shooting rampage at more than a dozen homes across rural communities in Nova Scotia, setting some structures ablaze, and killing at least 19 people.

Authorities have yet to release a motive. However, police said it appeared the gunman, dressed in uniform and arriving at homes in a car made to look like Royal Canadian Mounted Police cruiser, appeared to know at least some of the victims before beginning to attack at random.

Royal Canadian Mounted Police Chief Superintendent Chris Leather told a news conference Monday that police expect to find more victims once investigators are able to comb through crime scenes at 16 separate locations, five of which were homes set fire by the gunman while people were inside.

The 12-hour rampage began in the rural town of Portapique, about 60 miles north of Halifax, where police warned residents to lock their doors and stay in their basements as the attack unfolded. The town, like all of Canada, had been adhering to government advice to remain at home because of the coronavirus pandemic and most of the victims were inside when the attack began.

As officers scrambled from crime to crime scene, they eventually tracked down the gunman, who was also killed during a shootout with police. Fox News is honoring Prime Minister Justin Trudeau’s request that the media not name the shooter.

Here are the victims who’ve been identified:

This undated photo provided by the Royal Canadian Mounted Police shows Constable Heidi Stevenson, who was killed in a weekend shooting rampage by a gunman disguised as a police officer in the Canadian province of Nova Scotia. (RCMP/The Canadian Press via AP)

Royal Canadian Mounted Police Constable Heidi Stevenson was killed in the line of duty early Sunday morning while responding to the active shooting situation. She was a mother of two and a 23-year veteran of the force.

“We have lost one of our own while she was protecting others,” RCMP chief superintendent Chris Leather said Monday afternoon, according to The Guardian. “This is the definition of a true hero.”

Trudeau also recognized the officer, saying: “She was answering the call of duty, something she had done every day.”

She had previously served as a school liaison officer, with former colleagues sharing a photo of her helping young school children cross the street.

They lived in the rural town of Wentworth and often had family over in the summertime to go tubing in the river behind their house, McLeod’s daughter, Taylor Andrews, told the newspaper. Andrews has a one-year-old daughter, Ellie, who her father and stepmother loved having over for sleepovers and showering with love and gifts.

"She was their world,” Andrews said. “They were the most selfless people I know. They would have done anything for anyone. They loved living where they lived because everybody on the road, they were all friends and they all got together all the time.”​

John Zahl and Elizabeth Joanne Thomas were the gunman’s next-door neighbors. Their house was destroyed by a fire over the weekend, and the couple is missing but presumed dead, according to a GoFundMe page set up for the family.

Both regularly volunteered at St. James Presbyterian Church, and Joanne was the head of the "Laundry Project,” a nonprofit group that helps people in need have clean laundry, the crowdsourcing page said.

Tom Bagley, a military veteran and retired firefighter, was found by neighbors outside his home in a pool of blood, the Chronicle Herald reported. He was out for his daily walk and raced to help when he saw a house was on fire.

Describing her father as a “beautiful soul,” his daughter, Charlene Bagley, said on Facebook that he “died trying to help which if you knew him, you knew that was just who he was all the time.”

“The bottom line is: I loved the guy,” Joe MacLean of Enfield, who worked with Bagley for 30 years on the fire brigade at the Halifax Stanfield International Airport, told the Chronicle Herald. “Bagley would give you the shirt off his back, there is no doubt about it. If you called him and went to see him, he’d give you whatever you needed.”

His nephew, Jeff Flanagan, also shared a photo on Facebook saying he was “still in disbelief and shock that Uncle Tom is gone” and “Tom will be greatly missed by anyone that had the privilege of knowing him.”

Lisa McCully, a teacher and a mother of two, was among the shooting victims, her sister and the Nova Scotia Teachers’ Union confirmed. She taught third and fourth-graders at Debert Elementary School.

“She was somebody who taught from the heart,” union president Paul Wozney said in a statement. “She taught her kids not just the curriculum but teaching about virtues and personal qualities.”

“This is so hard to write but many of you will want to know. Our hearts are broken today as we attempt to accept the loss of my sister, Lisa McCully, who was one of the victims of the mass shooting in Portapique last night,” her sister, Jenny Kierstead wrote on Facebook.

Heather O’Brien was a nurse for 17 years and a grandmother. She lived in the town of Truro. Her daughter, Darcy Dobson, said she was texting her mother minutes before the shooting, The Guardian reported.

“I want everyone to remember how kind she was. How much she loved being a nurse. The way her eyes sparkled when she talked to her grandchildren and the way she just loved Christmas. Let those things define her. Not the horrible way she died,” Dobson said in a Facebook post.

Her niece, Megan Brown, also described her aunt as "a wife, a mother, a big sister, a grandmother, an aunt, a nurse, a healer, a listener, a guide, a bright light in so many lives.”

Greg and Jamie Blair were married in 2014 and are survived by their two young children.

“I have absolutely no words for the heartache my family & many others are going through,” Jessica MacBurnie said on Facebook.

Aaron Tuck, 45, Jolene Oliver, 40, and their 17-year-old daughter, Emily Tuck all died in the shooting rampage. Tuck was a mechanic, and Oliver worked in hospitality. The family of three had shared Facebook videos earlier this month, urging people to stay home and enjoy quarantine together.

“It was like they knew each other,” Shelly MacLean, Tuck’s cousin who introduced the couple over 20 years ago, told The Globe and Mail. “They were inseparable from day one.”

Kristen Beaton worked as a continuing care assistant for the Victorian Order of Nurses (VON) in Derbert, the Globe and Mail reported. She was a young wife and mother.

“All of our front-line care providers are heroes. Yesterday, two of those heroes, Heather O’Brien and Kristen Beaton, were taken from their families, and from VON,” CEO and President Jo-Anne Poirier said in a statement Monday. "We mourn their loss, and we mourn for their families.”

Her husband, Nick, paid tribute to his wife in a Facebook post, writing that “we need to be her voice now” to help her former co-workers get the personal protective equipment they need amid the pandemic.

“So please for Kristen’s sake protect the ones who are protecting us,” Nick Beaton wrote. “She cried every day before and every day after work, scared to bring this COVID home to her son she loved more than I could even imagine anyone could love one person.”

Dawn and Frank Gulenchyn lived on the same street as the gunman. They relocated to Portapique after living for decades in Oshawa, Ontario, according to Dawn’s son, Jon Farrington. She had retired last year from her career at Hillsdale Terraces, a long-term care home in Oshawa, the Globe and Mail reported.

Joey Webber was out running an errand for his family when he was killed during the shooting rampage. He is survived by his partner, Shanda MacLeod and their two young daughters, according to a GoFundMe page set up for the family. He was as a logger at a local pulp mill, and had been temporarily out of work during the COVID-19 crisis, before returning to his job last week.

Lillian Hyslop was in her 60s, was married, had children and lived in Wentworth.

“She was a quiet and, overall, very nice lady,” a friend, Heather Matthews, said. “We would often see her walking her dog outdoors and she wouldn’t miss a community event.”

Gina Goulet worked as a denturist in Shubenacadie. She had survived cancer twice, her most recent diagnosis was last year. She enjoyed bass fishing, dancing and travelled to Cuba often, her daughter said.

“She really loved life,” her daughter, Amelia Butler, said. “She was a fighter.”