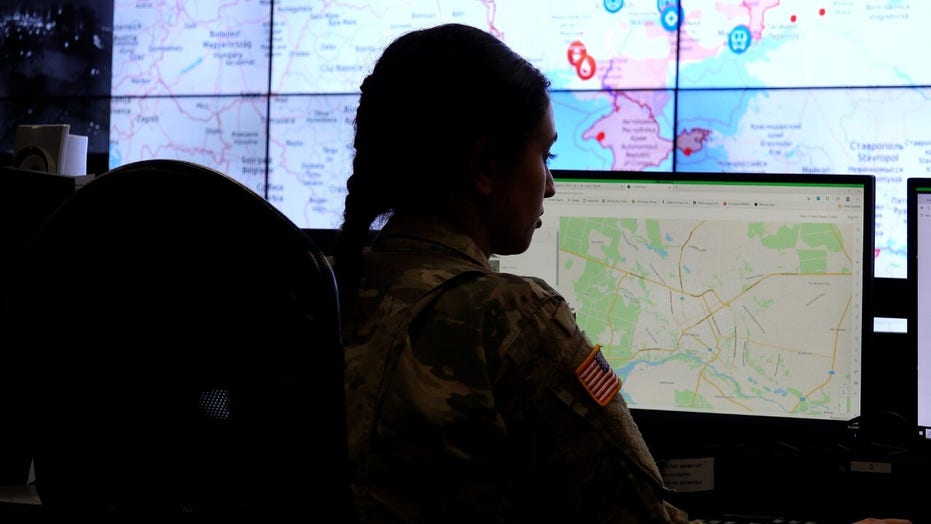 California's National Guard helped train the Ukrainian military after 2014 and has worked with them on other training efforts since the Soviet Union dissolved.

"We focused almost exclusively on helping to reform their military and helping to train their troops for combat," California National Guard Maj. Gen. David S. Baldwin said. The call center, he said, is something the guard has never done before.

The California National Guard takes calls and communicates with the Ukrainian military and officials, to help streamline aid and resources from the United States Government, on March 16, 2022, in Sacramento, California. (FNC)

Over the years, members of the Guard have been deployed to Ukraine to train in combat situations. Anastasia Maynich, a California National Guard member and a Ukrainian-American, has had first-hand experiences with field-training. Maynich was also deployed to Iraq and Afghanistan, and joined the United States Army after 2001, following in her grandfather's footsteps who was a World War II veteran.

"It was something that I loved to do because I wasn’t there for just myself. I was there to help the people and for the people," Maynich said. She said she's no stranger to jumping into action. It's what she decided to do when she learned her cousin, Tetiana, and her cousin's 11-year-old daughter, Sophia, were almost killed in Ukraine.

"They’re my family, and you’ll do anything for the people that you love," Maynich said. She began the almost 5 thousand-mile journey to the Romanian and Ukraine border to pick them up and bring them to safety. Tetiana and Sofiia packed what they could before leaving Odessa. On the way, they said their car was struck by gunfire.

Tetiana and 11-year-old Sofiia are pictured above after crossing into Bucharest. (Anastasia Maynich)

After staying about a week in Bucharest, Maynich, Tetiana and Sophia went on a four-day trip to Germany, where they stayed with a close friend, until they heard from U.S. immigration officials.

But this was only the first part of the journey for the family. Because a visa is required to arrive in the United States by plane, Tatiana and Sophia then flew to Mexico, and crossed into the U.S. through Tijuana.

UKRAINIAN REFUGEE IN US: ‘I DON’T BELIEVE THAT WE'RE HERE' AFTER CROSSING THE SOUTHER BORDER

"If I can save at least two lives during this crisis, I’m extremely grateful for being able to do that," Maynich said.

The family is now temporarily staying with Maynich in her Bay Area home in California.

"Human beings have to help each other, and they [Ukrainian's] really just have to stay strong," Tatiana said after arriving into the United States.