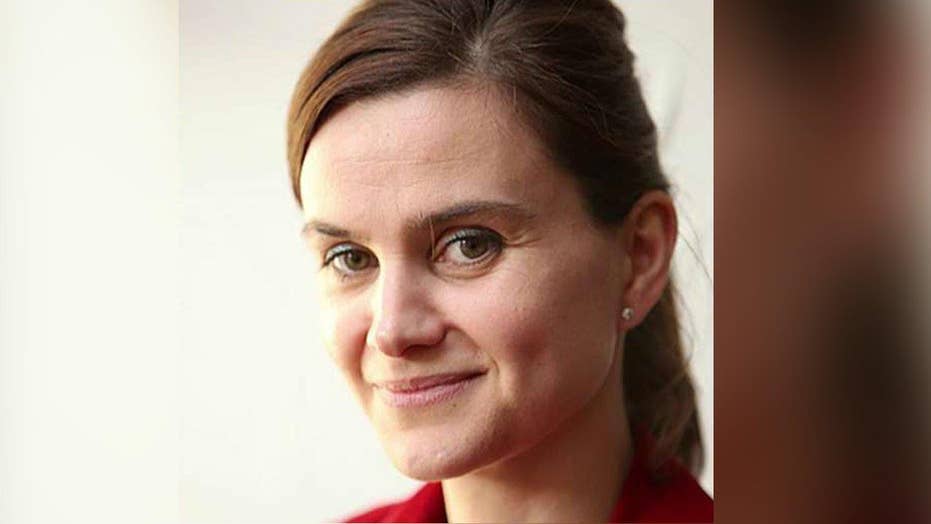 A British member of Parliament was killed Thursday when a man shot and stabbed her near Leeds, police said, but there were conflicting reports about the man's possible motivation.

Early reports said the killer shouted "Britain First," which seemed to indicate that the attack was motivated by the looming vote on whether to leave the Euopean Union. But a witness to the attack on Jo Cox, a member of the Labor Party, later said the killer did not utter the words, according to reports.

"Our working presumption ... is that this is a lone incident," said Dee Collins, acting chief constable of West Yorkshire Police.

British security officials said the shooting didn't appear to be related to international terrorism, but domestic terrorism has not been ruled out.

The 41-year-old lawmaker was a member of the Labor Party representing Batley, and a mother of two.

"Somebody tried to grab [the attacker], wrestling with him and then he wielded a knife, like a hunting knife, just started lunging at her with a knife half a dozen times," Clarke Rothwell, the owner of a nearby cafe in Birstall, told the BBC.

No serving U.K. member of Parliament has been killed since 1990, when the Irish Republican Army killed Conservative lawmaker Ian Gow with a booby-trap bomb placed under his car outside his English home.

"We were extremely shocked to see these reports," Jayda Fransen, deputy leader of the Britain First movement, told The Guardian, saying Britain First would not condone that behavior. Britain's Vote Leave and Vote Remain groups suspended campaigning after the attack.

The suspect ultimately kicked the lawmaker on the ground and walked off "very coolly, very slowly," leaving her bleeding between two cars, witness Hithem Ben Abdallah told Sky News. "A very courageous man from the dry cleaners tried to restrain him and he couldn't stop him because all of a sudden he pulled a gun. She was a standing still target for him when he shot her."

Police did not reveal details on a possible motive. Cox wrote an editorial last week for the Yorkshire Post opposing the so-called "Brexit," ahead of the referendum vote scheduled for June 23.

She also has made finding a solution to the Syrian civil war a top priority and has been critical of Britain's reluctance to deepen its military involvement against Islamic State terrorists as part of that effort.

Describing the gun, Abdallah said, "It looked like a gun from, I don't know, the First World War or a makeshift, handmade gun. It's not sort of like the kind of gun you see normally." He told Sky News the attacker wore a dirty white baseball cap.

The attack unfolded near a library where Cox was meeting with constituents. Crews airlifted her to Leeds General Infirmary.

Cox, who co-chairs the Friends of Syria All Party Parliamentary Group, was elected in 2015. She graduated from Cambridge University in 1995, the BBC added.

Former U.S. Congresswoman Gabrielle Giffords, who survived an assassination attempt in 2011, said Thursday she and her husband are grieving over Cox's death.

Giffords, who was critically injured by a gunshot wound to her head while meeting with constituents, praised Cox as "courageous, young and a hard-working public servant. She was a rising star, a mother and a wife."

Giffords said in a statement: "I don't remember the constituent meeting where I was shot in the head and nearly lost my life, but the scores of such events I and so many others have hosted represent the importance of a democracy connected to its citizens."

In the past two decades, two other British lawmakers have been attacked during their "surgeries," regular meetings where constituents can present concerns and complaints. A Labor legislator was stabbed in the stomach and injured in May 2010 by a female student radicalized by online sermons from an Al Qaeda-linked preacher.

In 2000, Liberal Democrat lawmaker Nigel Jones and his aide Andrew Pennington were attacked by a man wielding a sword during such a meeting. Pennington was killed and Jones injured in the attack in Cheltenham, England.

Birstall is about 200 miles north of London.