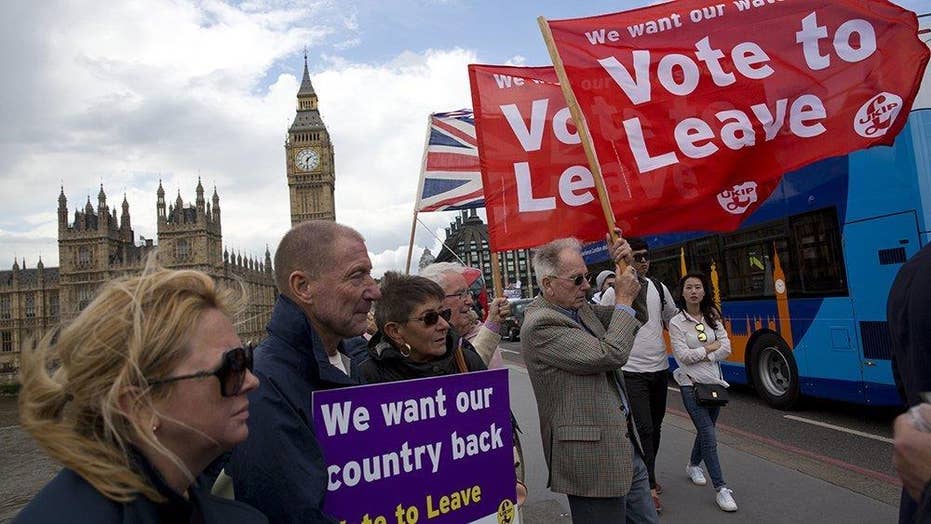 After Brexit, is it possible American polls are wrong too?

The aftershocks of Thursday's referendum on British membership in the European Union continued to reverberate Saturday with one lawmaker saying Parliament should overturn the result.

Voters in England, Wales, Scotland, Northern Ireland and Gibraltar opted to leave the 28-nation bloc by the relatively narrow margin of 1.2 million votes out of more than 33 million cast. The result revealed deep regional and generational divides in the United Kingdom, with young voters, London and Scotland overwhelmingly voting "Remain." By contrast, older voters, the rest of England and Wales voted "Leave" by similary large margins.

It initially appeared that many voters quickly developed buyer's remorse after the vote, with more than 2 million people apparently signing an online petition calling for a second referendum to be held. But it was revealed Sunday that many of those signatures were faked, with hackers from Anonymous and the online community 4 Chan likely responsible, Heat Street reported.

About 77,000 signatures had already been removed from the petition on Sunday, The Telegraph reported, and the House of Commons announced Sunday afternoon that an investigation would be launched into the allegations of fraud.

"We take fraud in the petitions system very seriously, because it undermines the process of parliamentary democracy," a House of Commons statement said.

Among the petition irregularities cited by The Telegraph: Nearly 24,000 people signed from North Korea, a nation infamous for its lack of Internet access; More than 39,000 signatures came from Vatican City, which only has a population of 800 people.

The petition, which had 2,374,547 signatures shortly before 9:30 p.m. U.K. time, proposed a rule that stating that if the "remain" or "leave" camps won less than 60 percent of the vote with less than a 75 percent turnout "there should be another referendum."

"Leave" won Thursday's vote with 52 percent on a turnout of 72 percent, the highest turnout for a national vote since 1992.

Technically, the referendum result is not legally binding because of Britain's sovereign Parliament. David Lammy MP, a member of the left-wing Labor Party, called Saturday for a legislative vote on whether to remain in the EU.

"We can stop this madness and bring this nightmare to an end," Lammy said. "Let us not destroy our economy on the basis of lies and the hubris of ('Leave' leader) Boris Johnson."

However, neither the petition nor Lammy's appeal for a vote were likely to have any effect on the vote to leave the EU after 43 years of British membership.

Alan Renwick, deputy director of University College London's Constitution Unit, told the Associated Press that a parliamentary vote to overturn the referendum result was possible "in legal theory ...  In practice, that is absolutely not possible."

Discussing the petition, pollster John Curtice told the Daily Telegraph, "How many people voted in favor of Leave? Seventeen million. One million is chicken feed by comparison.

"It's no good people signing the petition now, they should have done it before. Even then, these petitions don't always mean a great deal.

"It has passed the 100,000 mark for it to be debated in Parliament. All that means is that some MPs will say, 'It's a terrible shame', others will say, 'Hallelujah'. Then that's the end of it."

Meanwhile, senior EU politicians demanded Saturday that Britain cut its ties quickly with the bloc. The U.K. must, at some point, unambiguously notify the bloc of its intentions and set a two-year clock ticking for negotiating its departure. Until then, Britain remains an EU member.

In contrast to the clamoring of EU officials, the leaders of Britain's "leave" campaign, who had reassured voters that the EU would offer Britain good terms for a new relationship, were largely silent Saturday.

England's 300-year-old union with Scotland could be another casualty of the referendum, since most people in Scotland voted to remain in the EU but were outvoted by a majority in much-larger England.

Scottish leader Nicola Sturgeon said Saturday that her semi-autonomous administration would seek immediate talks with EU nations and institutions to ensure that Scotland could remain in the bloc.

"(We will) explore possible options to protect Scotland's place in the EU," she said after meeting with her Cabinet in Edinburgh, adding that a new referendum on Scottish independence is "very much on the table."

Scotland voted in 2014 to remain a part of the U.K., but that decision was seen as being conditional on the U.K. staying in the EU.

The victorious "leave" campaigners have said there's no rush to trigger Article 50 of the EU's Lisbon Treaty, which will begin a two-year exit process to renegotiate trade, business and political links between the U.K. and what will become a 27-nation bloc.

British Prime Minister David Cameron announced his resignation Friday and said his successor, to be chosen by October, should be the one to navigate the tricky process of withdrawing from the bloc.

European Commission President Jean-Claude Juncker said Saturday the British had voted to leave and "it doesn't make any sense to wait until October to try and negotiate the terms of their departure."