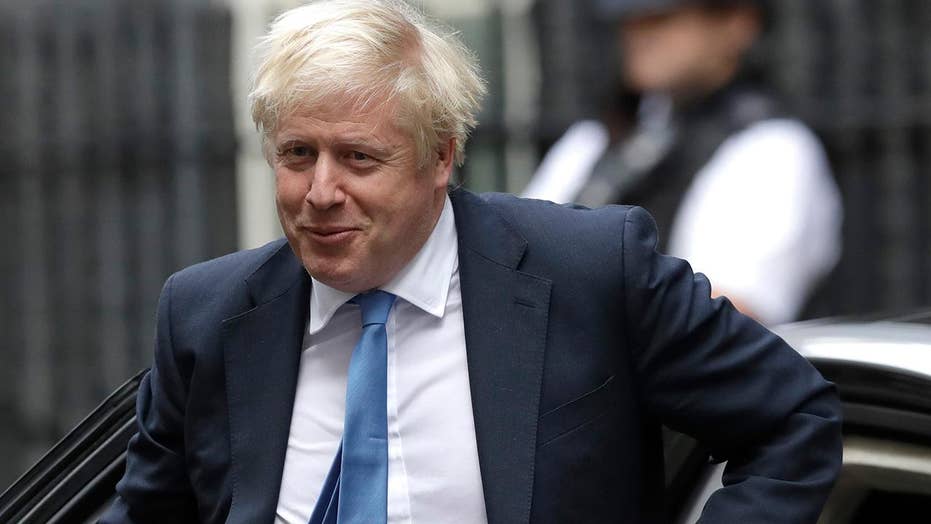 British Prime Minister Boris Johnson’s new Brexit proposals are being met with skepticism Thursday from top European leaders who said they are “still unconvinced” and that the plans “fall short in a number of aspects.”

Johnson argued in the House of Commons the changes his government just offered on regulating trade between Ireland and Northern Ireland after Brexit represented a significant compromise. Britain is set to leave the European Union on Oct. 31 unless it seeks and is granted an extension by the bloc.

“We have made genuine effort to bridge the chasm, to reconcile the apparently irreconcilable and to go the extra mile as time runs short,’’ he said.

The new proposals from Johnson’s government, delivered to the EU on Wednesday, focus on maintaining an open border between the U.K.’s Northern Ireland and EU member Ireland -- the key sticking point to a Brexit deal. The U.K. proposes to do that by keeping Northern Ireland closely aligned to EU rules for trade in goods, possibly for an extended period.

In this image taken from video, Britain's Prime Minister Boris Johnson gives a statement to the House of Commons in London, on Thursday. (AP/Parliament UK)

BORIS JOHNSON DELIVERS 'FINAL OFFER' FOR BREXIT DEAL TO EU, SAYS 'WE CAN, WE MUST AND WE WILL' LEAVE BLOC

Economists and Johnson’s own government say a no-deal Brexit could lead to significant trade disruptions for Britain, including shortages of medicine and fresh produce.

But as the day wore on, however, key EU figures started expressing doubt over the new U.K. proposal.

European Union leader Donald Tusk said he was “still unconvinced” about Johnson’s proposals to unblock the stalled Brexit negotiations even after having a phone call with him.

Irish leader Leo Varadkar told reporters that the new Brexit plans “fall short in a number of aspects," and the European parliament supervisory Brexit group argued that the proposals “do not match even remotely” what is needed for a compromise.

After being briefed by EU Brexit negotiator Michel Barnier, the Brexit group declared the proposals were a step back toward an overall deal. The group unites experts from all major groups in the European Parliament, which must approve any final Brexit deal.

British voters narrowly chose to leave the EU in 2016, but the country remains deeply divided over how to do it. Johnson has warned of “grave consequences for trust in our democracy” if Britain doesn’t leave the EU on the scheduled date of Oct. 31.

Johnson reached out Thursday to both the EU and to the House of Commons with a softer tone, despite the fact the proposals were billed by his own office as a take-it-or-leave-it “final offer.” Johnson sought to lower the temperature of Parliament’s heated Brexit debates in recent weeks -- commenting that he was “disappointed’’ by the tone used by other lawmakers sharply questioning his proposals.

British lawmakers though continued to attack the new Brexit plans and Johnson on Thursday, accusing him of deliberately proposing a deal he knows won’t work. The Scottish National Party’s parliamentary leader, Ian Blackford, said the prime minister's proposals simply push the country closer to a no-deal Brexit by offering a plan that the EU is likely to reject.

“These proposals are unacceptable. They are unworkable. They are undeliverable,’’ Blackford said. “Mr. Speaker, it is a plan designed to fail, but of course, the prime minister knows that. By his own desire, this take-it-or-leave-it threat is yet another push towards a catastrophic no-deal Brexit."

The proposal would create “an all-island regulatory zone on the island of Ireland, covering all goods including agrifood.” That would keep Northern Ireland in a regulatory zone with the EU for food, agricultural and industrial products, removing the need for border checks.

The U.K. proposal doesn’t put a time limit on that status, although it would have to be renewed every four years by the Northern Ireland Assembly. However, that assembly has been suspended for more than two years by a dispute between the main Unionist and Nationalist power-sharing parties.

Under the new U.K. plan, there would still need to be customs checks, but Johnson suggested they could be carried out away from the border at “other points on the supply chain.”