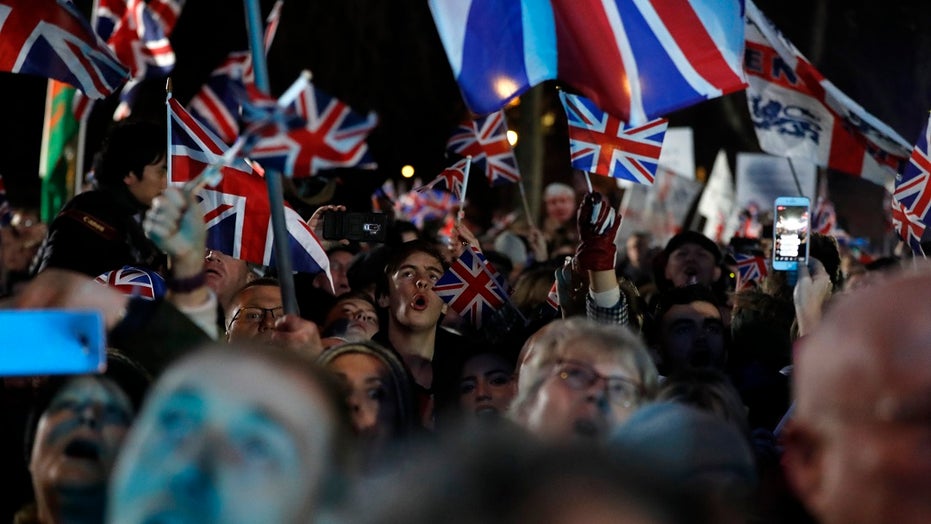 The United Kingdom officially left the European Union on Friday, entering into a period of uncertainty after three years of bitter wrangling over Brexit and tense negotiations over the terms of divorce between London and Brussels.

The departure became official at 11 p.m. London time when the clock struck midnight in the Belgian capital, where the EU is headquartered. Thousands of Brexit supporters waving Union Jack flags gathered outside Parliament to celebrate the severing of the 47-year relationship.

A recording of Big Ben's bells sounded out as crowds sang "God Save the Queen."

Brexit supporters gather during a rally in London on Friday. (AP Photo/Frank Augstein)

Brexit supporters had been looking forward to this moment since June 23, 2016, when 52 percent of the public voted to walk away from the EU, the successor to the European Communities it joined in 1973. Prime Minister Boris Johnson called the departure “a moment of real national renewal and change.”

“This is the single most important moment in the modern history of our great nation,” Nigel Farage, leader of the Brexit Party, told the crowd.

Some mourned the loss of their EU identity, with several vigils being held across the U.K. Ann Jones joined dozens of other so-called "remainers" on a march to the EU’s mission in London.

“Many of us want to just mark our sadness in public,” she said.

Candlelight vigils were held in several Scottish cities, government buildings in Edinburgh were lit up in the EU’s blue and yellow, and the bloc’s flag continued to fly outside the Scottish Parliament.

Anti-Brexit protesters gather outside the Scottish parliament in Edinburgh.<br> Britain officially leaves the European Union on Friday after a debilitating political period that has bitterly divided the nation since the 2016 Brexit referendum. (AP Photo/Scott Heppell)

There was also sadness in Brussels as British flags were quietly removed from the bloc’s many buildings, before being folded and taken away.

French President Emmanuel Macron called Brexit a “historic alarm signal” that should force the EU to improve itself.

“It’s a sad day, let’s not hide it,” he said in a televised address. “But it is a day that must also lead us to do things differently.”

Johnson, who won a December general election victory with his promise to get Brexit done, insisted post-Brexit Britain would be “simultaneously a great European power and truly global in our range and ambitions.”

“We want this to be the beginning of a new era of friendly cooperation between the EU and an energetic Britain,” Johnson said in a pre-recorded video address to the country broadcast an hour Brexit became official.

An 11-month transition period now follows as Britain and the EU will negotiate new agreements on trade and a number of other issues. Britons, in the meantime, will see very little change.

Brexit supporters argue Britain's departure will allow it to strike trade deals with countries like the United States and growing Asian markets.

Protesters from the campaign group Border Communities Against Brexit take part in a demonstration in Carrickcarnon on the Irish border, Ireland on Friday. (AP Photo/Peter Morrison)

Breaking away from the EU also raises concerns for residents in Ireland and Northern Ireland, where protecting the peace after the Good Friday agreement of 1998 was a top priority.

The agreement ended three decades of sectarian violence known as the "Troubles" between groups that wanted to reunify Ireland and those who favored Northern Ireland remaining in Britain.