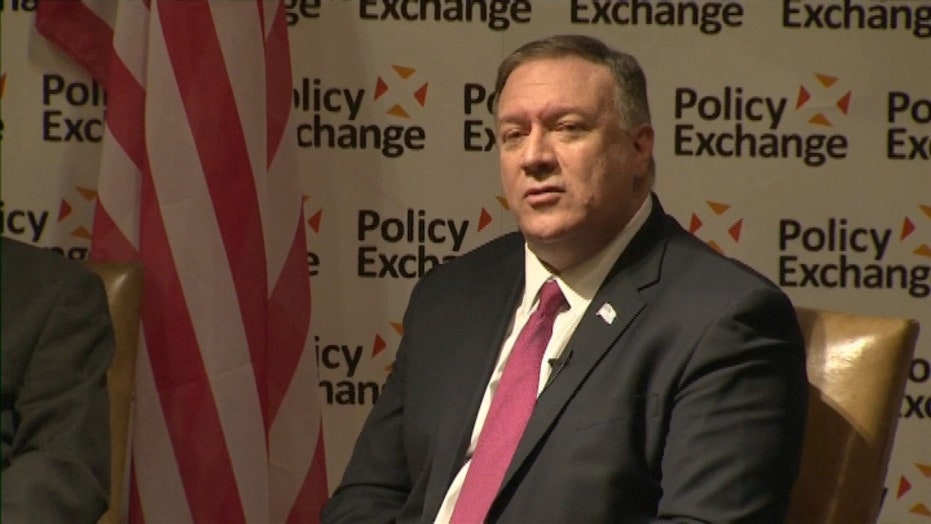 Pompeo reassures Britain on US relations after Brexit

Three days after the official start of Brexit, British Prime Minister Boris Johnson scolded “America bashers” and claimed there was “no need” for the United Kingdom to agree to European Union sanctions in order to deliver a free trade deal with the bloc.

In his first speech following the departure, Johnson also suggested new legislation that would ensure convicted terrorists aren’t immediately released back into the public. The remarks came after Sunday’s “terrorist-related” incident in south London, where a convicted Islamic militant, who had been released from prison and was wearing a mock-suicide vest, was shot and killed by police following a stabbing rampage that injured three people.

“There is no need for a free trade agreement to involve accepting EU rules on competition policy, subsidies, social protection, the environment, or anything similar, any more than the EU should be obliged to accept U.K. rules,” Johnson told a crowd gathered in the Painted Hall at the Old Royal Naval College in Greenwich on the River Thames, a spot steeped in Britain’s past military glories.

“The U.K. will maintain the highest standards in these areas — better, in many respects, than those of the EU – without the compulsion of a treaty. And it is vital to stress this now.”

Johnson declared that while the situation is not a “deal or no deal” scenario, he sees “no need to bind ourselves to an agreement with the EU.”

"The potential is enormous," Johnson said in the vast hall, covered in paintings glorifying British achievement, and where Adm. Horatio Nelson lay in state after his death at the Battle of Trafalgar against the navies of France and Spain in 1805.

"We want a thriving trade and economic relationship with the EU,” he said. “We will restore full sovereign control over our borders and immigration, competition and subsidy rules, procurement and data protection."

Official trade and security negotiations with the EU kick off next month. Both sides agreed to an 11-month post-Brexit transition period to strike an “ambitious, broad, deep and flexible partnership,” including a free trade deal and agreements for security and other areas. For the rest of this year, the U.K. will continue to follow EU rules, although it will no longer have a say in EU decision-making.

“We are ready to consider an agreement on fisheries, but it must reflect the fact that the U.K. will be an independent coastal state at the end of this year 2020, controlling our own waters,” he said. “And under such an agreement, there would be annual negotiations with the EU, using the latest scientific data, ensuring that British fishing grounds are first and foremost for British boats.”

In his own speech earlier Monday morning, European Union negotiator Michel Barnier said there can be no free trade deal unless the UK agrees to a “level playing field,” specifically by agreeing “U.K. fishermen and European fishermen to have reciprocal access to our territorial waters and our markets."

“We are in favor of free trade, but we are not going to be naive," Barnier said. “If the request is to have broad access to a market of 450 million European consumers, zero tariffs, zero quotas. That won’t happen for nothing, or in any kind of condition.”

"That agreement on fisheries will be inextricably linked to the trade agreement," he said.

Johnson also championed reaching a “Canada-style” trade agreement with the European Union instead of an “Australia-style.” Australian-style trade would mean a panoply of new tariffs and other barriers between the U.K. and the EU, its near neighbor and biggest trading partner, according to The Associated Press. The EU-Canada deal that the British government cites as a model took seven years to negotiate – which could prove challenging to replicate under the current 11-month deadline.

In regards to the terror-related incident in south London’s Streatham area Sunday, Johnson said, when drafting new policies, the country doesn't want to return to a system where released offenders are subject to laborious surveillance.

"We are bringing forward legislation to stop the system of automatic early release. The difficulty is how to apply retrospectively to the cohort of people who currently qualify," he said. "It is time to take action to ensure, irrespective of the law we are bringing in, people in the current stream don't qualify automatically for early release."

British Home Secretary Priti Patel said the government would release its plans later Monday. Following Sunday's attack and a Nov. 29 attack in which two people were killed in central London, the government said it would effectively stop the early release of convicted extremists, double terror sentences and overhaul the conditions under which they are released back into the community.