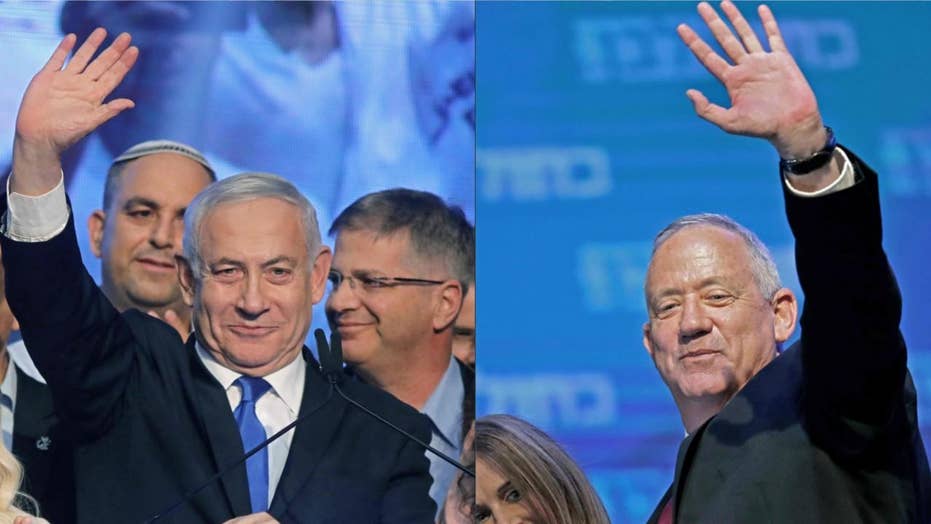 The preliminary results of Israel's election show that two main political parties are deadlocked. The end results may leave Prime Minister Netanyahu looking for a job.

Israel’s Prime Minister Benjamin Netanyahu appealed to his direct rival to form a unity government as the country’s two main political parties remained deadlocked at the end of an unprecedented second election, with the prospect of a third looming Thursday.

"Throughout the campaign, I called for a right-wing government, but unfortunately the election results show that's not possible," Netanyahu said in a video statement Thursday. "Therefore there is no choice but to form a broad unity government."

"We cannot and there is no reason to go to third elections," he added.

DOUG SCHOEN: NETANYAHU AND GANTZ IN TIGHT RACE TO LEAD ISRAEL -- WINNER MUST MASTER THE ART OF THE DEAL

There was no immediate response from Blue and White. However, a source in the campaign told local media the party viewed the plea as a PR stunt, BBC News reported.

Gantz, a former army chief, has previously pledged not to sit in the same government as Netanyahu, who may face indictment in a slew of corruption scandals, including bribery, breach of trust and fraud. Netanyahu, the longest-serving leader in Israeli history, has denied the allegations as he seeks a fourth consecutive term.

Neither party will be able to form a majority without support from Avigdor Lieberman, of the nationalist Yisrael Beitenu party. His insistence on a secular government would force out Netanyahu's traditional allies, the country's two ultra-Orthodox parties, and another nationalist-religious party.

Meanwhile, Israeli President Reuven Rivlin welcomed Netanyahu’s appeal as an “important call” ahead of his consultations with all parties in the coming days to pick the candidate he believes has the best chance of forming a stable government, BBC News reported.