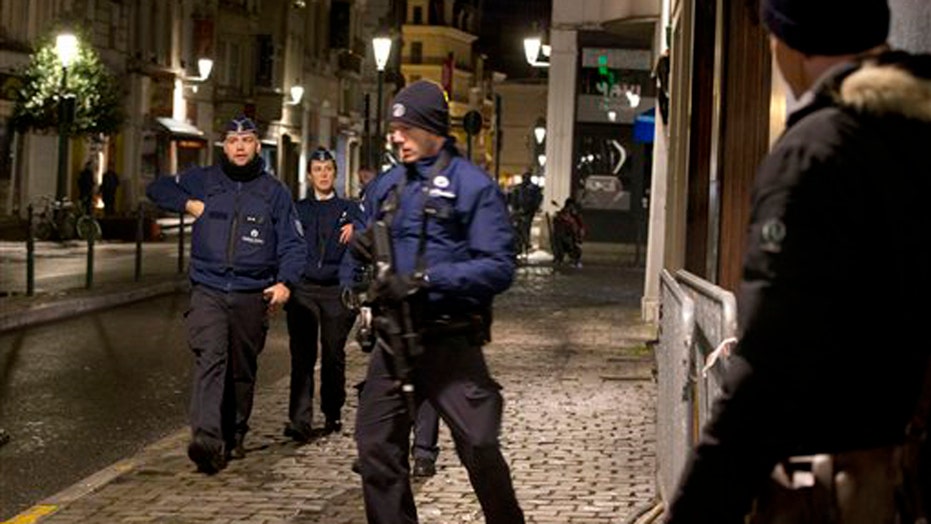 The Belgian Prime Minister announced Monday that schools and subways in Brussels will be reopened on Wednesday as the capital endures its third day of a government-ordered lockdown.

“These are difficult moments for the population,” Prime Minister Charles Michel said during a press conference. He added that Belgium will remain on the highest alert level and maintain current security measures.

Officials announced the school and subway closures on Sunday and have deployed more than 1,000 security personnel across the country.

The city has been at maximum alert since Saturday, with authorities citing information about an "imminent threat," possibly a series of coordinated attacks similar to those that killed 130 people in Paris on Nov. 13.

Earlier Monday, Belgian authorities announced  five more people have been detained in anti-terror raids, raising the total to 21. One of those arrested was shot and injured by police when his car tried to ram into police during an attempted getaway.

Federal prosecutor Eric Van Der Sypt said no firearms or explosives were found during the raids. In a raid last week in Saint-Denis in which Paris attack mastermind Abdelhamid Abaaoud was killed, only a 9mm pistol was found, The Telegraph reported, citing French newspaper Le Parisien.

Police fired two shots at a car that approached them as they searched a snack bar in the city's impoverished Molenbeek district, Van Der Sypt told The Associated Press. The vehicle escaped but was stopped later in Brussels, and a wounded person inside was arrested. It was not immediately known if the person was linked to the investigation into the Paris attacks.

Fugitive Salah Abdeslam, suspected of helping to carry out the Paris attacks, was not among those apprehended.

Jambon also told Belgium's RTL broadcaster that Abdeslam "must have a lot of support on our territory. That's why all these searches being conducted at the moment are important."

A Belgian police source told Sky News that authorities feared that Abdeslam could be "trapped and desperate" in Brussels. The city has been the focal point of investigations into the Paris attacks since it emerged that several suspects in the carnage, including the operation's alleged mastermind, lived near each other in Molenbeek.

Over the weekend, a number of bomb scares caused severe disruptions in the city, including the closure of a major train station and the evacuation of a television station. Events that would have attracted large crowds, such as soccer matches, were postponed.

On Monday, the streets of Brussels were mostly deserted save for a few random buses and cars -- and some army trucks unloading soldiers. Security was extra tight in the city's European quarter, especially around the EU institutions where ministerial meetings were going ahead as planned.

"It feels a bit like a dead city," said Cedric Verschooten, a government worker who lives in Flanders and was in Brussels for meetings. Verschooten stopped to take a selfie in the empty streets, which he said would normally be teeming with traffic.

Brussels resident Ligea Salazar said she was very afraid there could be a Paris-style attack on Brussels. Despite the increased police and military presence, she wasn't reassured.

"I don't think they really know what's going on," she said. "They released too many people after arresting them."

In Paris, British Prime Minister David Cameron said Monday he will ask for parliamentary approval for the U.K. to join airstrikes against Islamic State extremists in Syria.

Cameron and French President Francois Hollande, meeting in Paris, paid a quiet visit to the Bataclan concert venue, which saw the worst of the carnage in Paris. Hollande plans to meet later this week with Russian President Vladimir Putin, German Chancellor Angela Merkeld and then U.S. President Barack Obama in pursuit of a unified strategy in Syria.

Britain has been carrying out airstrikes in Iraq, but Cameron has long wished for an expanded mandate to include targets in Syria. But having lost a vote once two years ago, his government had been reluctant to even suggest a vote until it could be certain it would win.

France has intensified its aerial bombing in Syria and Defense Minister Jean-Yves Le Drian said the aircraft carrier Charles de Gaulle, which has been sent to the Mediterranean, will be "operational" from Monday and "ready to act."

France has extended a state of emergency which allows police raids, searches and house arrest without permission from a judge, for three months. On Saturday, it also extended a ban on demonstrations and other gatherings through Nov. 30, when a U.N. climate conference with more than 100 heads of state is scheduled to start.

The Islamic State group has claimed responsibility for the attacks in Paris; the suicide bombings in Beirut that killed 43 people and injured more than 200; and the downing of the Russian jetliner carrying 224 people in Egypt's Sinai Peninsula. All happened within the past month.