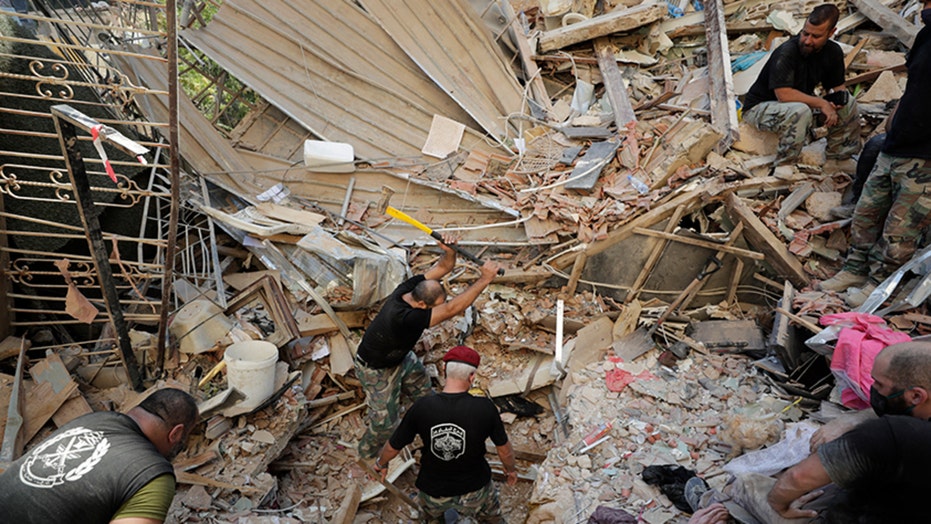 Secretary of Defense Mark Esper spoke with Fox News' Judge Jeanine Pirro in an exclusive interview covering the administration's plans to provide humanitarian assistance to Lebanon in the aftermath of the Beirut blast, the escalating tension between the U.S. and China, the decision to withdraw American troops from Germany and how many troops will be coming back from Afghanistan.

A police officer was killed Saturday as thousands of protesters in Beirut stormed government buildings and called for an uprising days after a massive explosion in the Lebanese capital’s port left at least 158 dead and some 6,000 wounded.

“The objective today is to act quickly and effectively to coordinate our aid on the ground so that it goes as efficiently as possible to the Lebanese people,” Macron said from his home in the French Riviera.

Molotov cocktails are hurled at Lebanese soldiers by anti-government protesters during a protest against the political elites and the government after this week's deadly explosion at Beirut port which devastated large parts of the capital in Beirut, Lebanon, Saturday, Aug. 8, 2020. (AP Photo/Hassan Ammar)

The first world leader to visit Lebanon within 48 hours of the explosion, Macron also implored world leaders to "work together to ensure that neither violence nor chaos prevails." He also called on the Lebanese government "to respond to the aspirations that the Lebanese people are expressing right now, legitimately, in the streets of Beirut," the BBC reported.

Among other world leaders on the call, President Trump expressed his deepest condolences for those killed and injured in the Beirut explosion and reaffirmed that the U.S. stands ready and willing to continue providing aid to help the people of Lebanon in their recovery.

Trump also urged the government of Lebanon to conduct a full and transparent investigation, in which the United States stands ready to assist, White House Deputy Press Secretary Judd Deere said in a summary of the teleconference provided to media. Trump called for calm in Lebanon and acknowledged the legitimate calls of peaceful protesters for transparency, reform, and accountability.

The European Union member states, China, Russia, Egypt, Jordan, and the United Kingdom participated in the summit, as well as representations from the United Nations, the International Monetary Fund, the Red Cross, and the Arab League. The U.K. pledged £20m ($26 million) in "urgent humanitarian support" at the talks, in addition to the initial £5m ($6.5 million) aid package announced last week.

Some 10,000 people came out to protest Saturday in Martyrs’ Square in Beirut, where crowds stormed government ministries and the Association of Lebanese Banks, Reuters reported. Protesters hurled stones and firecrackers and riot police blocked the road leading to parliament. Officers deployed dozens of tear gas canisters.

One officer died after falling down an elevator shaft as a crowd chased him into a building, Sky News reported. The Lebanese Red Cross said 175 people were treated at the scene amid the violent clashes between police and demonstrators that lasted hours. Another 63 were transported to nearby hospitals.

The disaster has taken popular anger to a new level in a country already reeling from an unprecedented economic and financial crisis and near bankruptcy. Dozens were still missing and some 300,000 people are homeless. Activists who called for the protest set up symbolic nooses at Beirut's Martyrs' Square to hang politicians whose corruption and negligence they blame for the explosion.

ESPER ON AID TO LEBANON AFTER DEADLY BEIRUT BLAST: US DOING 'EVERYTHING WE CAN'

The blast was fueled by thousands of tons of ammonium nitrate that had been improperly stored at the port for more than six years. Apparently set off by a fire, the explosion was by far the biggest in Lebanon’s troubled history and caused an estimated $10 billion to $15 billion in damage, according to Beirut’s governor. It also damaged 6,200 buildings.

The country’s ruling class, made up mostly of former civil war-era leaders, is blamed for incompetence and mismanagement that contributed to Tuesday’s blast.

“The current leaders’ bloodline needs to end. We want the death of the old Lebanon and the birth of a new one," said Tarek, a 23-year-old university student who had prepared a mix of water and paint in a bottle to throw at the police. No peaceful protest would bring about change, he told the Associated Press.

“Resignation or hang,” read a banner held by protesters, who also planned to hold a symbolic funeral for the dead. Some nooses were also set up along the bridges outside the port. A placard listed the names of the dead over a photo of the blast's pink mushroom cloud and read: “We are here for you.”

In his sermon Sunday, Christian Maronite Patriarch Bechara Boutros al-Rai said the cabinet should resign because it’s impossible to “change the way it governs,” Reuters reported.

“The resignation of an MP or a minister is not enough,” Lebanon’s top Christian Maronite cleric said. “The whole government should resign as it is unable to help the country recover.”

A protestor is evacuated from clashes during a protest against the political elites and the government after this week's deadly explosion at Beirut port which devastated large parts of the capital in Beirut, Lebanon, Saturday, Aug. 8, 2020. (AP Photo/Thibault Camus)

In a televised speech Saturday evening, Prime Minister Hassan Diab said the only solution was to hold early elections, which he planned to propose in a draft bill. He called on all political parties to put aside their disagreements and said he was prepared to stay in the post for two months to allow time for politicians to work on structural reforms.

Officials have been blaming one another, and 19 people have been detained, including the port’s chief, the head of Lebanon’s customs department, and his predecessor.