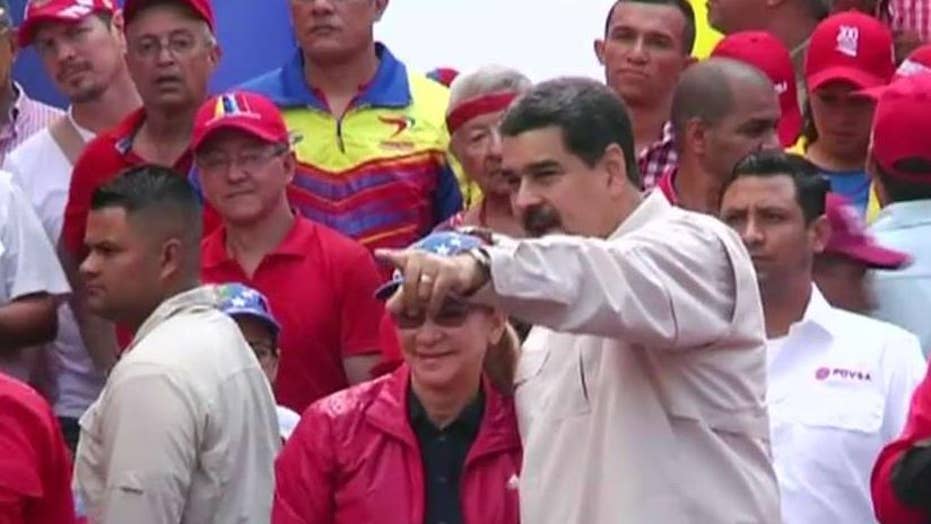 As coronavirus continues to rampage through already embattled Venezuela, President Nicolas Maduro has staunchly clamped down on all elements of civic society – going so far as to frame returnees as “bioterrorists” and a steep threat to national security.

Last month, the regime’s armed forces took to Twitter to encourage Venezuelans to alert authorities to such “terrorists” – commonly called trocheros, meaning those who had evaded stringent border controls.

“SPREAD FOR THE HEALTH OF OUR PEOPLE AND FAMILY! A trochero is a Bio-Terrorist, who puts everyone's health at risk,” the official tweet on July 14 declared. “Send a message to the email, with the information of the person and their exact location.”

Subsequently, over the past few months, authorities have apprehended hundreds of individuals illegally crossing from Colombia – leading Maduro to announce in mid-July that those detained could also be slapped with a “bioterrorism” charge if found to be infected with coronavirus, despite it already tearing through large swaths of the nation.

“Many Venezuelan migrants in exile have had to face the harsh reality to return to their homeland amid the outburst of COVID-19, given that with rising unemployment, many are not able to support themselves abroad neither in the short- nor the long-term. By crossing the frontier with Colombia, through deserted paths into forests and the savanna, they overcrowd and multiply COVID-19 cases in Venezuela,” Jose Luis Pirela, a member of the Venezuelan National Assembly and President of the Commission for Anti-Narcotics, Anti-Terrorism, and Organized Crime, told Fox News. “Maduro calls them ‘bio-terrorists' and has ordered the military and police to apply cruel treatments and physical punishments for returning to Venezuela.”

US SEIZURE OF IRAN FUEL BOUND FOR VENEZUELA WAS LARGEST CONFISCATION OF ITS KIND EVER, DOJ CONFIRMS

In this April 30, 2020 photo, Venezuelan migrants wait for buses that will transport them to the Venezuelan border, in Bogota, Colombia. The migrants want to return to their home country because they say they have not been able to find work in a country where businesses remain shuttered due to the new coronavirus pandemic and the strict stay-at-home order have limited their ability to help economically hurting relatives back home. (AP Photo/Fernando Vergara)

Javier Ignacio Mayorca, a criminology expert and member of the Venezuelan Observatory of Organized Crime in Caracas, noted that the reference was a bizarre one given that “bioterrorism” is not recognized under Venezuelan laws.

“So far, according to data released by the Public Ministry at the end of July, 209 people have been arrested for attempting to cross the border through unauthorized routes. Of these, 18 have been identified as organizers of these movements,” he surmised. “But none have been charged with ‘bioterrorism.’ Apparently, this has remained as one more idea, which has not been put into practice.”

According to InSight Crime, over 1,000 Venezuelan citizens are lingering at international crossings waiting to return home legally – but that comes with its own slate of health and security woes. Many claim to be targeted by authorities. Many were working abroad but lost their jobs when the global pandemic hit, and scores of people are routinely forced to spend longer than two months stuffed into unsanitary makeshift quarantine camps, heightening their chance of coronavirus infection.

Government mandates are currently only allowing 1,200 Venezuelans to come back per week, leaving many stranded for unknown periods of time – and with little choice but to embark on an unofficial jaunt home, which entails paying criminal enterprises that domineer the porous crossings.

However, government officials on both sides of the Colombia and Venezuela border are also reported to be in on the moneymaking – with the smuggler earnings divided up between gangs and authorities. InSight Crime also noted that the iron-fist approach touted by the Maduro government on migrant traffickers is “selective” – with arrests focused on paramilitaries and gangs antithetical to the Caracas regime.

Wealthy Venezuelans with connections to the Caracas inner circle and a few thousand to spare are said to be able to bypass any quarantine restrictions.

March 12, 2020: Venezuelan President Nicolas Maduro gives a press conference at Miraflores presidential palace in Caracas, Venezuela. In a fishing village on Margarita Island, more than 90 COVID-19 infections linked to a baseball academy that traveled to the Dominican Republic and returned set off alarms. Maduro was one of the firsts to react, calling the academy directors “irresponsible” amid his presidential order to quarantine, which prohibited gatherings like those held at the academy upon their return. Also infected were national guards providing security at the sports center, and inhabitants of the town and other neighboring towns on Margarita Island. (AP Photo/Matias Delacroix)

However, Fulton Armstrong, a former U.S. National Intelligence Officer for Latin America and former National Security Council Director for Inter-American Affairs, contended that the use of the word “bioterrorist” was mere “exaggeration.”

“Maduro in July apologized publicly for using the word," he told Fox News, "he said he just wanted to do some ‘conscience raising’ – but some in his government still use it.

"I certainly can’t defend the use of the word, but I sense that their frustration is intense as neighborhoods that had been clean since March are now experiencing cases,” he said. “The COVID pandemic has brought out exaggerated rhetoric from many. The Venezuelan government is no exception.”

And Guillermo Aveledo, a political science professor at the Universidad Metropolitana, pointed out that in some cases, Venezuelans are known to have been taken from their homes and “put in ad hoc quarantine centers,” if reported to have entered via an illegal trail.

“The fact of the matter is that it might not be callousness or cruelty, but the accumulated dire state of medical facilities that provide the bad treatment for the infected,” he told Fox News. “In many cases, it has been reported, even asymptomatic cases are taken, and isolated for over a month, given that testing capacity is sub-par. The narrative was that Covid-19 was not local, but ‘imported.’”

But for most Venezuelans inside their oil-swathed nation, once the richest in Latin America, the situation is deteriorating by the day – with the collapsed health care system a symbol of a broken country. Medical staff have been apprehended for questioning official data regarding the virus, which the government lauds as being one of the lowest in the region.

Officially, the government has recorded just under 37,000 cases of coronavirus and just over 300 deaths. Yet many analysts bemoan that the lack of testing equates to the low number of reported cases.

“Such figures are not trusted given that many people have fled hospitals due to the lack of water, food, and basic services. Even doctors and nurses have died because they cannot work with the required protection to face COVID-19, as well as other illnesses,” Pirela said. “In Venezuela, the health care system is severely deteriorated, and the scarcity of medicines even spans onto the most basic such as aspirin.”

And according to Mayorca, the pandemic has given rise to more repression and further reason for authorities to rule with an iron fist.

“The government has tried to ban vehicle queues, in the same way as it has banned parties or public gatherings, but it has not been able to prevent people from waiting days to fill the tank,” Mayorca asserted. “Simultaneously, the police and military bodies have continued their operations with the death toll. During the first six months of 2020, 2,267 civilian deaths have occurred due to alleged confrontations with uniformed corps officials. They call this ‘resistance to authority.’”

People, some wearing face masks as a measure to curb the spread of the new coronavirus, walk in the Catia neighborhood of Caracas, Venezuela, Saturday, June 20, 2020, during a relaxation of restrictive measures amid the new coronavirus pandemic. (AP Photo/Ariana Cubillos)

Meanwhile, the United States is still amid a diplomatic standoff with the Maduro regime. Since early last year, Washington severed ties with the Hugo Chavez successor and instead recognizes opposition leader Juan Guiado as Venezuelan’s legitimate leader. But that comes with a price for those caught in the crossfire.

James Story, U.S. Chargé d’Affaires for Venezuela, told independent news outlet Tal Cual in an interview last week that hundreds of U.S. citizens trapped in the beleaguered country have appealed to Washington since March for help in getting out amid the health crisis. Story said that in spite of numerous offers to pay their passage – as well as fund Venezuelans stranded in the U.S. a means to return – Caracas has declined to cooperate in what some critics deem to be a move rooted in using humans as pawns.

And inside the nation of 28 million – in the face of a steep humanitarian crisis, dizzying inflation, economic ruin, and brutal rule – many refuse to abandon the years of blood and risk that have been poured into anti-government street protests over the past five years.

“On a daily basis, there are approximately 40 to 50 protests across the country due to the unbearable unrest, power outages, and struggle to find basic goods such as water, food, oil, gas, medicines, among others. Maduro’s response has been the same all along, to repress the population,” Pirela added. “This situation becomes aggravated by the smuggling of fuel from Colombia to Venezuela. In the coming days, there will be no fuel given that the military and police will be squabbling to control it.”