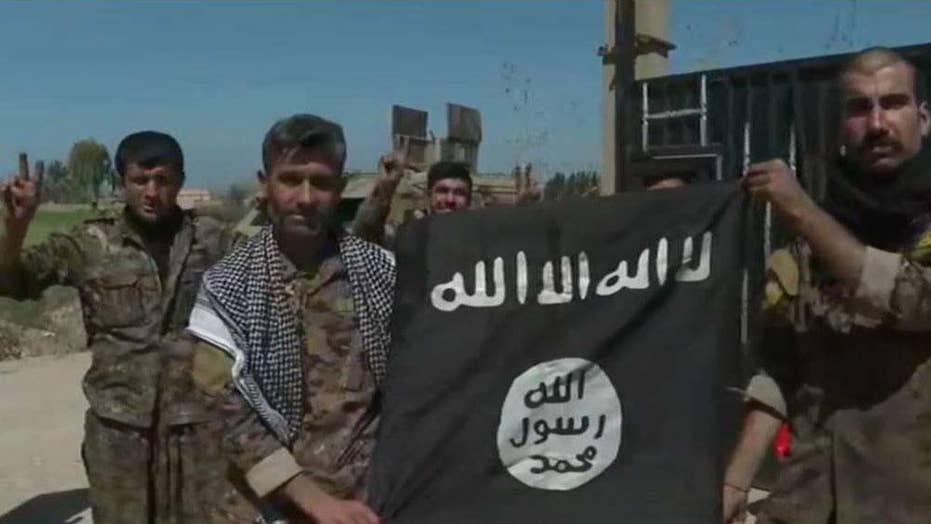 With the ISIS caliphate all but defeated and routed out of Syria, strongman Bashar Assad is using all means necessary to re-consolidate control over his war-ravaged country, targeting civilian infrastructure within rebel-held territory.

Throughout March, the Assad regime has targeted a school, a bakery, a hospital, and other medical facilities in its brutal attempt to regain control of Idlib Province, the last rebel stronghold of the Syrian opposition.

“Eight years into the crisis, the Syrian government continues to show utter disregard for the laws of war and the lives of civilians,” said Lynn Maalouf, Middle East Research Director at Amnesty International.

In this photo released by the Syrian official news agency SANA, people hold Syrian flags and portraits of President Bashar Assad during a protest against U.S. President Donald Trump's move to recognize Israeli sovereignty over the Israeli occupied Golan Heights, in the coastal port city of Tartus, Syria, Wednesday, March. 27, 2019. (SANA via AP)

Assad has essentially won the civil war which broke out in 2011. While his autocratic rule was once threatened, he is making attempts to reestablish himself as a world leader on the international stage.

Formerly opposed to Assad, the United Arab Emirates, Bahrain, and other regional actors accepted the undeniable reality on the battlefield that Assad is victorious and there is no chance of a rebel victory.

The UAE, once a major foe of Assad that called for his removal, announced in December it would restore ties with Damascus and reopened its embassy. Bahrain also resumed diplomatic relations the same month.

Assad’s main backers, Iran and Russia, will likely ensure that Syria receives the necessary post-conflict reconstruction funding to stabilize the country while also increasing their influence in post-civil war Syria.

Reconstruction funding for Syria is estimated at $400 billion.

22 March 2019, Syria, Idlib: Members of the Syrian civil defense extinguish a fire in a house allegedly targeted by an airstrike in the town of Kafraya in the north of Idlib. According to activists 10 people died in airstrikes allegedly carried out by Russian warplanes. (Getty)

It’s also likely Syria will need substantial assistance from the United States and the European Union. Much like Syria’s neighbors, calls for Assad’s removal have largely died down in the West, as the U.S. and E.U accepted the hard truth that Assad won. However, the U.S. and E.U. want Syria to commit to political reforms before providing economic assistance.

But Assad has made it clear he does not intend on implementing any political reforms to reduce his hold on power.

The United States and European Union will have to balance the reality that there are millions of people suffering from a humanitarian catastrophe caused by the Assad regime's indiscriminate repression against the need to stabilize the country and prevent it from civil war recurrence.

The ongoing battle for Idlib could spark a renewed refugee crisis with millions potentially looking to flee the onslaught from Assad and regime allied forces, causing massive civilian casualties.

THE ISIS CALIPHATE IS GONE - BUT ISIS WILL BE BACK

“If this turns into an all-out offensive on Idlib, it would result in mass casualties and displacement,” Faysal Itani, Senior Fellow at the Atlantic Council, told Fox News.

Puppeteer Walid Rashed performs a puppet act for Syrian children, in the midst of the rubble of damaged buildings, to mark the World Theatre Day as part of his tour of Saraqib in the rebel-held province of Idlib.  (Getty)

There are three million people trapped in Idlib, and nearly one million are displaced from other places in Syria. Idlib was also one of the first cities to take up armed resistance against the regime and the remaining rebels hunkered down in the province are primarily Jihadist militants.

Jidhasit fighters in Idlib are numbered in the low thousands, according to some estimates, and are also some of the most extremist forces that are left battling the government.

The United States remains deeply concerned about the humanitarian consequences of the recent attacks on Idlib. In early March, the U.S. State Department accused Russia and Syria of escalating violence against innocent civilians in Idlib.

“Despite Russia’s claims to be targeting terrorists, these operations have caused dozens of civilian casualties and have targeted first responders as they attempt to save lives on the ground. These abhorrent attacks on civilian infrastructure and on settlements for internally displaced people must end now."