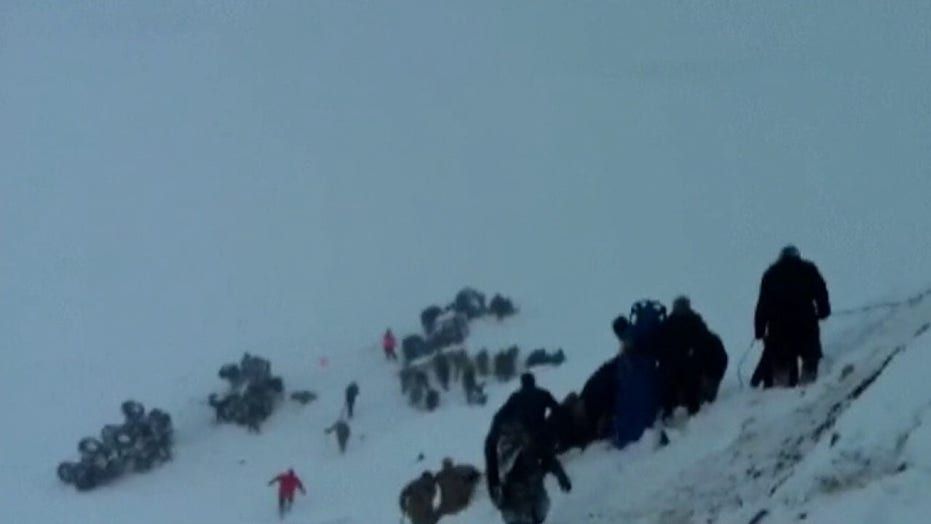 Dozens of rescuers were killed as they searched for two people who were caught in a previous avalanche; Benjamin Hall reports.

At least 12 rescue workers were killed and 15 others are believed to be trapped in snow after an avalanche struck the group in Turkey on Wednesday as they were attempting to find two people missing in an earlier avalanche.

Some 300 emergency service workers were originally called to a highway near the mountain-surrounded town of Bahcesaray in Van province, which borders Iran, after an avalanche struck late Tuesday, killing five people and burying two others.

Around noon Wednesday, the team on the highway was then struck by the second avalanche.

Video from the scene showed at least three overturned vehicles at the bottom of a hill during a snow storm. Some rescuers were climbing a steep incline to get out of the mass of snow while others dug frantically into the snow with shovels and pick-axes.

Dozens of rescue workers are missing in Turkey after being hit by a second avalanche while on a mission to find two people missing in a previous snow-slide that struck late Tuesday, burying a snow-clearing vehicle and a minibus. (Yilmaz Sonmez/IHA via AP)

Fog, heavy snow and strong winds were hampering the rescue efforts, according to Turkish broadcaster NTV.

More than 50 people are believed to be trapped in vehicles after the second avalanche on Wednesday, the BBC reported.

Interior Minister Suleyman Soylu told reporters that 11 rescuers' bodies had been recovered so far, including eight military police officers and three government-paid village guards. Gov. Mehmet Emin Bilmez later said a firefighter was also killed. An estimated 15 others are believed to have been buried in the snow and still listed as missing.

Some 30 emergency workers were either rescued or escaped from under the snow and were hospitalized Wednesday, the Interior Ministry said. There was no further information on their condition.

Emergency service members dig in the snow around at least three overturned vehicles, near the town of Bahcesehir, in Van province, eastern Turkey, Wednesday, Feb. 5, 2020. (DHA via AP)

Wednesday's avalanche increased the overall death toll from the disaster to 17.

The first avalanche late Tuesday buried a snow-clearing vehicle and a minibus. The vehicle's operator and seven passengers escaped alive.

The state-run Anadolu Agency said the operator, Bahattin Karagulle, was trapped beneath the snow for 25 minutes before he managed to break a window and escape. He told the agency he walked toward a village before being picked up by a vehicle and managed to seek help.