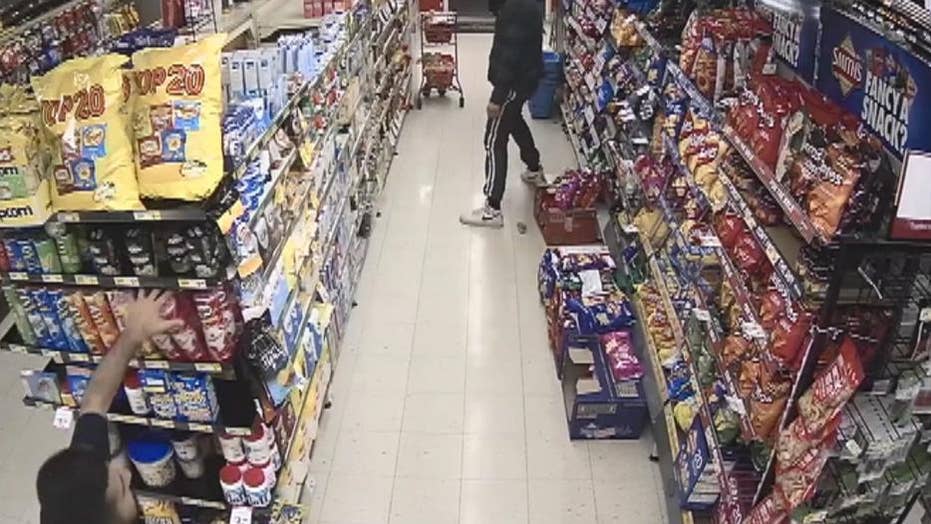 Owner defends store against robbery attempt by man with ax

Surveillance footage shows the owner of Friendly Grocer in Australia defending the store against an attempted robbery by an ax-wielding man.

A store owner in Australia recently proved an ax-wielding robber was no match for tuna fish and Pringles.

Baz Rizk, who owns the Friendly Grocer just outside Brisbane, fought back against an assailant on June 28 in a confrontation captured on surveillance video.

In the video, the masked man starts walking up an aisle after demanding cash only to have Rizk pelt him with items off the shelf, such as cans of tuna fish and Pringles, until the suspect runs away.

“Unfortunately you need to take the law into your own hands to protect yourself,” Rizk told 7 News. “Because after they rob you they get a slap on the wrist and walk out with nothing."

Rizk said his coworkers chased the man away from the store using baseball bats. He previously has defended his store from robbers, pelting one would-be thief with a jar of Vegemite in an incident 10 years ago.

"We're not scared of them, it's just the element of surprise, the quick action, the experience we've had, we know what to do," he told 7News.