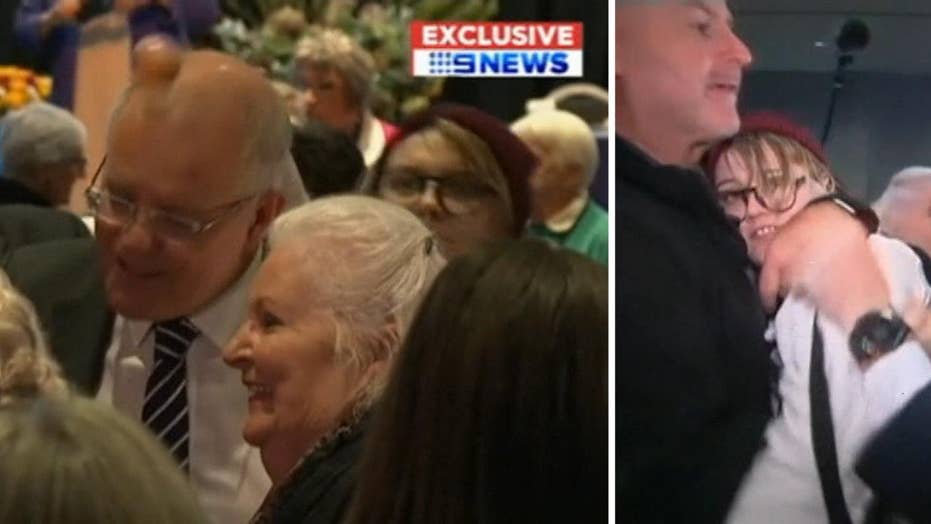 Raw video: Protester throws egg at Australian Prime Minister Scott Morrison at an election event. A 70-year-old woman was knocked over in the melee but was uninjured.

Plenty of politicians end up with figurative egg on their face, but Australia's prime minister on Tuesday got an actual egg to his head during a protest that also resulted in a 70-year-old woman being knocked over.

Prime Minister Scott Morrison was at a rural woman's conference in the town of Albury, located about 200 miles southwest of Canberra when a 24-year-old woman tossed the egg at him.

The egg appeared to strike Morrison on the back of the head -- and then bounce off without breaking.

In this image made from video, an egg hits the head of Australian Prime Minister Scott Morrison as he spoke to a rural women's conference in the town of Albury, Australia. (Channel 9 via AP)

Morrison praised his security team for doing a "great job," and said on Twitter he will stand up to " thuggery" from "cowardly activists."

"My concern about today’s incident in Albury was for the older lady who was knocked off her feet. I helped her up and gave her a hug," Morrison said. "Our farmers have to put up with these same idiots who are invading their farms and their homes."

If re-elected on May 18, Morrison has promised to change laws to prevent vegan activist organization Aussie Farms from publishing the addresses of farms it accuses of animal cruelty and encouraging the public to harass the farmers.

Australian Prime Minister Scott Morrison, left, talks with attendees at the Country Women's Association NSW annual conference after he was hit on the head with an egg during a protest at the event. (Mick Tsikas/AAP Image via AP)

Holt was charged with common assault and possession of a prohibited drug, cannabis, Sky News Australia reported. The 24-year-old has been released on bail and will appear in court later this month. Morrison said the incident showed that Australians "have to disagree better" ahead of the upcoming elections.

"Pardon the pun, but I don't want to over-egg this thing. At the same time, what my concern was, for Margaret and the disregard the individual seemed to have for those others who were in the room," Morrison told reporters.

"Just because you have a difference of view to someone doesn't mean you have to engage in these sorts of ugly types of protests," he added.

The woman who was knocked over, Margaret Baxter told reporters she was taken out by a cameraman and was not injured after landing on her hip.

"The prime minister helped me get up off the floor and I was very grateful for his assistance," Baxter said.