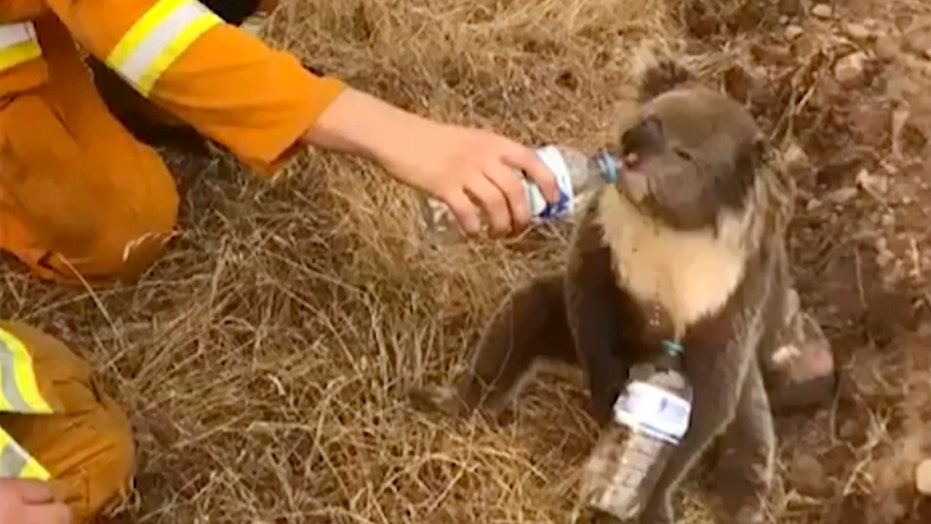 Thousands of koalas are feared to have died in the wildfires raging in parts of Australia, with officials saying they believe up to a third of the iconic marsupial population may have been lost.

The mid-northern coast of New South Wales was home to up to 28,000 koalas before the blazes began scorching the region last month.

Sussan Ley, Australia’s environment minister, told the Australian Broadcasting Corporation on Saturday that “up to 30 percent of their habitat has been destroyed.”

In this image made from video taken on Dec. 22, 2019, and provided by Oakbank Balhannah CFS, a koala drinks water from a bottle given by a firefighter in Cudlee Creek, South Australia. Around 200 wildfires were burning in four states, with New South Wales accounting for more than half of them, including 60 fires not contained. (Oakbank Balhannah CFS via AP)

“We’ll know more when the fires are calmed down and a proper assessment can be made,” she added. “In the meantime, I’ve convened experts, scientists, people who understand koala behavior, to work out how we build those corridors in the habitats and how best we reintroduce koalas from the hospitals."

Koalas are native to Australia and are one of the country’s most beloved animals. However, their natural habitat, Eucalyptus forests, has been threatened by wildfires and a years-long drought.

The dramatic rescue of a koala in New South Wales last month captured the hearts and attention of people around the world. A video of a woman pulling the badly burned, wailing koala from a brushfire and dousing it with water went viral.

Images shared on social media in recent days showed koalas drinking water out of tubs and bottles after being rescued.

“I get mail from all over the world from people absolutely moved and amazed by our wildlife volunteer response and also by the habits of these curious creatures,” Ley said, adding that other native animals have also been heavily impacted by the fires.

Officials said more than 12.35 million acres of land have burned nationwide during the crisis. Nine people – including two firefighters – have been killed and more than 1,000 homes destroyed.

The fire danger in New South Wales – just north of Sydney – was upgraded to “severe” Saturday, as temperatures topped 100 degrees in parts of the region.

The high temperature in Sydney was expected to reach 88 degrees Sunday and 95 on Tuesday.

The hot weather, which has come in the first part of Australia’s summer, started early this year after an unusually dry and warm winter.

Fox News' Travis Fedschun and Greg Norman, and The Associated Press contributed to this report.