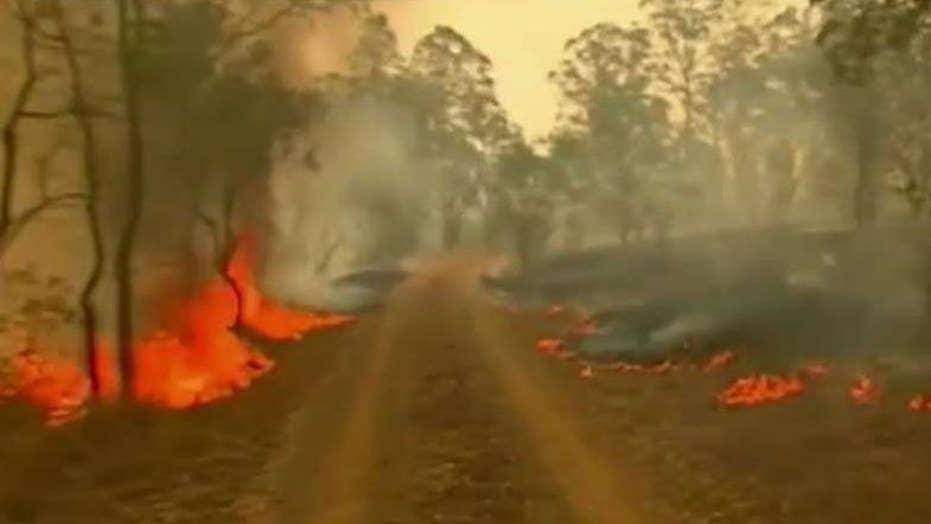 Firefighters battling more than 70 wildfires in Australia’s most populous state are bracing for worse conditions as an “extreme heat wave” is set to hit over the weekend.

Thousands of firefighters in New South Wales took advantage of cooler weather after Christmas to fight the fires still burning across the country’s most populous state.

More than 12.35 million acres have burned nationwide over the past few months, killing nine people and destroying more than 950 homes. Around 850 of those homes were razed in New South Wales.

Authorities are bracing for the start of the summer season. About 2,000 firefighters and 400 firetrucks battled the blazes in more favorable conditions Thursday.

AUSTRALIAN MAN SURVIVES WILDFIRES BY HIDING IN MAKESHIFT KILN: 'THIS WAS CATASTROPHIC'

Bureau of Meteorology forecaster Rose Barr told reporters that the heatwave is currently building in the southern parts of New South Wales and will worsen over the weekend.

“Some areas are forecast to reach extreme heatwave conditions,” she said. “With the increasing heat and winds, the fire danger will worsen into the new week, with Monday and Tuesday mostly likely to be the most significant fire weather days.”

This image made from video taken on Dec. 22, 2019, and provided Dec. 25, 2019, by Ingleside Rural Fire Brigade, shows the wildfire behind an emergency vehicle near property on Hat Hill Road in Blackheath, New South Wales. Australian authorities have warned that the fires in New South Wales could fester for months, causing more angst for exhausted firefighters.(Ingleside Rural Fire Brigade via AP)

Sydney is forecast to hit 88 degrees Fahrenheit on Sunday before reaching 95 F on Tuesday. The city’s western suburbs could reach 106 F.

The hot weather, which has come in the first part of Australia’s summer, started early this year after an unusually dry and warm winter.

In this image made from video taken on Dec. 22, 2019, and provided by Oakbank Balhannah CFS, a koala drinks water from a bottle given by a firefighter in Cudlee Creek, South Australia. Around 200 wildfires were burning in four states, with New South Wales accounting for more than half of them, including 60 fires not contained. (Oakbank Balhannah CFS via AP)

The devastation put pressure on Prime Minister Scott Morrison, who was criticized for going on a family vacation to Hawaii during the wildfire crisis. He eventually apologized for any offense “caused to any of the many Australians affected by the terrible bushfires by my taking leave with family at this time.”

In this image made from video taken on Dec. 23, 2019, and provided Dec. 25, 2019, by Ingleside Rural Fire Brigade, fire brigade volunteers trying to tackle the fire in Kurrajong Heights, New South Wales. Australian authorities have warned that the fires in New South Wales could fester for months, causing more angst for exhausted firefighters.(Ingleside Rural Fire Brigade via AP)

In his annual Christmas message, Morrison paid tribute to the families of the two firefighters who died last week.

“To Andrew and Geoffrey’s parents, we know this is going to be a tough Christmas for you, first one without both those two amazing men,” he said.

“I want to thank all those who serve our nation, serving as volunteers fighting those fires as we speak,” Morrison added.

Meanwhile, South Australian firefighters Thursday were battling wildfires in Adelaide Hills, which has been downgraded to the “advice” level.

In South Australia state last week, 86 homes were destroyed after wildfires flared in catastrophic conditions. A return of extreme temperatures, however, are expected with Adelaide, the state capital, set to reach a sizzling 104 F on Friday to start a four-day heatwave. It is the second such hot spell in just over a week.

Travis Fedschun and the Associated Press contributed to this report.