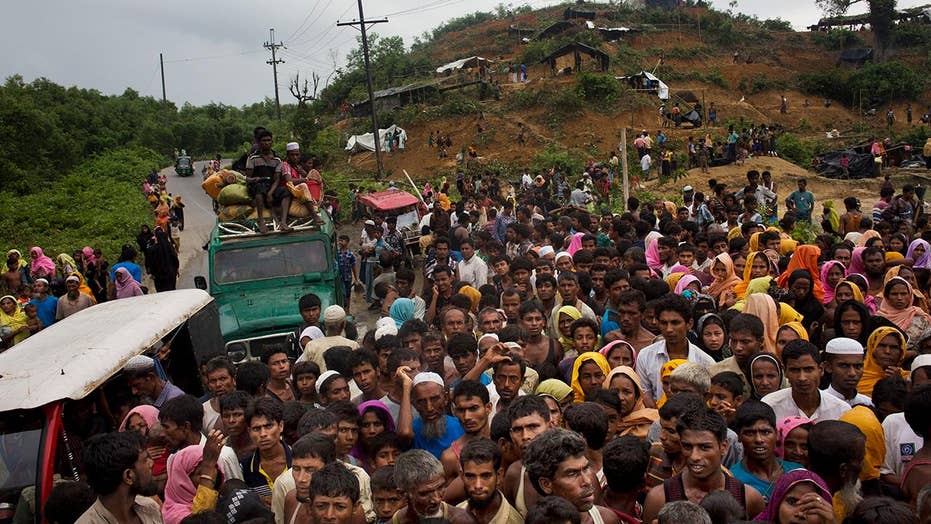 At least 370,000 of Muslim refugees have flooded into Bangladesh over the past two and a half weeks to escape recent violence in Buddhist-majority Burma

As hundreds of thousands of stateless Rohingya Muslims languish in squalid camps in Bangladesh, Burmese leader Aung San Suu Kyi is sitting a world away – some 5,000 miles at The Hague' International Court of Justice (ICJ), in the Netherlands – defending her country’s military against accusations of genocide.

“The ICJ case is the first time Myanmar will have to answer for the crimes against the Rohingya on the world stage. It will highlight the tomes of evidence of serious abuses committed by Myanmar’s military against the Rohingya collected by the UN, the US State Department, Refugees International, and many other independent groups,” senior advocate for Human Rights at Refugees International, Daniel Sullivan, told Fox News.

Suu Kyi, a Nobel Peace Prize laureate, was once deemed an international darling of human rights having bravely faced arrest and oppression at the hands of the same military generals she is now voluntarily defending.

Burma, more recently known as Myanmar, is being accused of purporting to “destroy the Rohingya as a group, in whole or in part, by the use of mass murder, rape, and other forms of sexual violence, as well as the systematic destruction by fire of their villages, often with inhabitants locked inside burning houses.”

For more than two years, much of the world has looked on in horror as thousands of Rohingya Muslims have been gunned down by the Buddhist-majority military, referred to as the Tatmadaw. Thousands more have allegedly been burned to death, their houses razed, raped, and almost one million have been forced to flee across the border to Bangladesh. The neighboring nation this year declared that it would not accept any more refugees.

The ICJ case was brought about by Gambia, a Muslim majority country in west Africa, on behalf of dozens of other Muslim countries. A U.N. fact-finding mission corroborated much of the allegations made with its August report accusing soldiers of “routinely and systematically employing rape, gang rape, and other violent and forced sexual acts against women, girls, boys, men, and transgender people.”

“All that Gambia asks is that you tell Myanmar to stop these senseless killings, to stop the acts of barbarity that continue to shock our collective conscience,” Gambia’s Attorney General and Justice Minister Abuacarr M Tambadou told the court on Tuesday. “To stop this genocide of its own people.”

Suu Kyi, who is constitutionally not allowed to assume the title of president given that she has foreign-born sons but is the shadow ruler under the guise of “State Counselor,” has declined to condemn her nation’s armed forces for such acts. Rather, she has instead toed the line of military leaders and officials who insist that the Rohingya population are illegal immigrants and “terrorists.”

“The root cause of this humanitarian issue is because of the Arakan Rohingya Salvation Army (ARSA) – the Muslim terrorist group,” U.N. Ambassador Hau Do Suan told Fox News. “They attacked against the government in Rakhine State in October 2016 and again in August 2017. This humanitarian problem was ignited by those terrorist attacks.”

That explanation has been dismissed by many Western countries and human rights groups, some of whom now believe a repatriation effort to return Rohingya, who had fled to neighboring Bangladesh in the face of ethnic cleansing - perhaps even genocide - is a potentially disastrous recipe for further persecution.

“Her response to the Rohingya crisis is already lacking, and her decision to appear in front of The Hague to defend the Burmese military against accusations of genocide, crimes against humanity, and war crimes is just another strike against her leadership,” said Olivia Enos, Senior Policy Analyst for Asian Studies at The Heritage Foundation.

In this Nov. 15, 2017, file photo, Rohingya Muslims, who crossed over from Myanmar into Bangladesh, wait in queues to receive aid at Kutupalong refugee camp in Ukhiya, Bangladesh.  (AP)

Sullivan concurred that Sun Kyi will likely echo arguments of denial she has been using since the start of the mass expulsion of the Rohingya.

“For example, despite the overwhelming evidence, she earlier stood by a statement by her office claiming ‘fake rapes’ of Rohingya women and bizarrely asked why no one was talking about the villages that hadn’t been burned,” he said. “Aung San Sun Kyi is the de facto leader of Myanmar, though her power is constrained by a still-influential military. Yet she has not simply remained silent on abuse of the Rohingya. She has become an apologist for the military that led the campaign of violence against the Rohingya. She is defending the indefensible.”

Nonetheless, many inside Burma also told Fox News that it would be “dangerous” for Suu Kyi to speak out against the military rule.

Yet her decision to act as a front for them over three days of public hearings this week has analysts questioning whether it is merely an election tactic for her party’s own 2020 campaign.

Indeed, it has bolstered her popularity on the home front, where fans have organized rallies in her honor and billboards of her face with a signature flower woven through her long hair have peppered populated areas.

Yet experts in the human rights arena have also pointed out that while bringing the case to the attention of the ICC Hs benefits, regardless of the outcome, it is unlikely to deliver the justice that the Rohingya people seek.

“This is why actors like the U.S. need to issue a genocide determination – to grant greater credence to the UN reports that provide evidence that these war crimes were committed by the Burmese military,” one expert, who requested anonymity given the sensitivity of the subject, noted.

In this file photo dated Thursday, Nov. 15, 2018, Rohingya refugees shout slogans during a protest against the repatriation process at Unchiprang refugee camp near Cox's Bazar, in Bangladesh.  (AP)

An initial guilty ruling could potentially lead to sanctions, but further action in the International Criminal Court would likely be years away. Suu Kyi is expected to address the ICJ on Wednesday.

“The prosecutors will argue that genocide has taken place and that a high risk of genocide remains today. An ultimate judgment as to whether Myanmar committed genocide could take years, but ‘provisional measures’ could come in a matter of weeks,” Sullivan said. “These are effectively restraining orders that would call on Myanmar to halt abuses and refrain from destroying evidence. While the court has no mechanism to enforce these, the fact they are coming from the highest legal entity at the UN will compel countries to take a stronger stance against Myanmar.”

Moreover, activists have also underscored that the Rohingya are not the only minority being heavily persecuted in the tiny Southeast Asian country.

While the most visible victims have been the Rohingya Muslims, the Kachin and Karen people, as well as Christians across the Buddhist-dominant nation, are among those who have been displaced, their villages burned to the ground, with innocent civilians butchered by members of the Burmese military.

“It is such a disappointment because Suu Kyi was once the face of international human rights and the winner of a Nobel peace prize,” Sullivan added. “She should be defending the Rohingya and other ethnic minorities, not the military that continues to persecute them.”