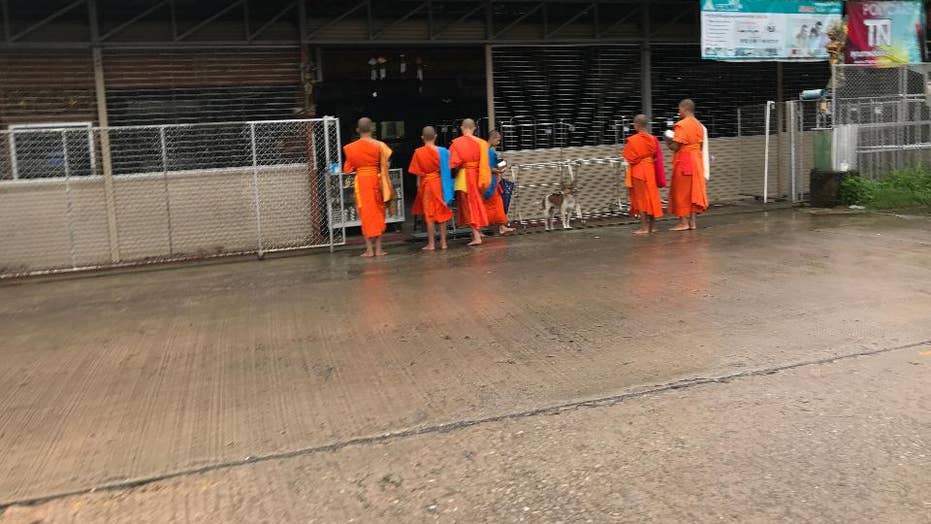 MAE LA, Thailand – More than 100,000 mostly ethnic Karen refugees from Burma - many Christians among them - are crammed into nine camps set out in isolated, misty hills of jungle terrain inside the border of Thailand.

The camps, which have been here for generations, are now rife with depression, substance abuse, and suicide - a taboo topic in Karen culture. Loved ones often refuse to discuss suicides, out of fear it will afflict another family member.

Yet the hushed-away problem figures only to worsen as camp conditions deteriorate, and donations from an international community that hears much more these days about persecuted Muslims in another Burmese minority group, the Rohingya, begin to dry up.

A church for the Burmese Karen Christians on the grounds of the world's largest refugee camp, Mae La in Thailand. (Fox News/Hollie McKay)

“There is an increased pressure on people as a result of the reductions (in aid),” said Hayso Thako, an education coordinator for the camps. “For the older people, they have been here so long they have lost hope of a better life. And for the young people who take their lives, there is no hope that they can see.”

Three years after their joint suicide, the legacy of two such youth still haunts the Karen.

Two teenage Karen refugees take their own lives, signaling an uptick of suicides amid the bleak situation. (Provided to Fox News)

In March, 2015, Kyawsay and his girlfriend, Nawehkohloh, were teenagers in love. Members of the long-persecuted Burmese Karen minority, they were both born in the Mae La Oon refugee camp along the Burma-Thailand border. They knew nothing – and had never seen so much as a glimpse – of the world outside.

Ensnared by family conflicts, a lack of opportunity and an overwhelming sense of hopelessness, the young lovers hung themselves side-by-side in a school classroom inside the camp grounds one afternoon.

Options are limited for the Karen people, many of who have spent their entire lives confined to the camp grounds. (Fox News/Hollie McKay)

The tragic double-suicide rocked the refugee community. But it would not be first – nor the last – incidence of a refugee taking their life in what has become a growing problem.

Depression among the refugee population is especially high among pregnant and post-partum mothers. (Fox News/Hollie McKay)

According to official data provided to Fox News, since 2015 some 60 refugees between the ages of 12 and 72 have committed suicide. Another 23 have attempted it.

It's not hard to understand why.

Frequent flash flooding during monsoon season is known to destroy what little livelihoods the Karen Burmese have in the refugee camps. (Fox News/Hollie McKay)

Established nearly 35 years ago, a faded “temporary” sign still adorns the entrance of the Mae La camp, the largest of the nine camps, and “home” to almost 40,000 Karen. Thousands of children were born and raised in the camps, then went on to have children of their own.

That's produced multiple generations who have not been allowed to set foot beyond the barbed-wire barricades, as per Thai government regulations.

Visitors are also typically not permitted to enter the deeply secluded grounds. The refugees are considered stateless, and without a country to call their own, are generally forbidden from gaining Thai citizenship. They are also unable or unwilling to register as Burmese citizens, or obtain documentation from abroad.

That leaves the refugees with few options, though some do their best to pass the time.

Despite losing limbs and their eyesight to landmines, a group of Christian men being cared for in a small cement shelter have learned to weave and bead – making delicate hearts and crosses, keychains and jewels, which they sell for a few pennies to passers-by.“

Honest (left) with other leaders of the Mae La camp lament the sharp reductions in funding that have occurred in recent years. (Fox News/Hollie McKay)

Jesus is our hope, our life,” the men sing in their native tongue, having formed their own gospel choir to pass the dark days and nights.

The camps frequently experience devastating flash floods in the wet season, which have claimed the lives of dozens of refugees - and obliterated fragile homes built with bamboo and banana leaves.

Worse, in recent years Karen refugees have seen their already limited monthly rations of rice, yellow split peas, fortified flour and fish paste fall by almost half. That figure is expected to drop even further in the coming months – worsening the already acute rate of malnutrition in the camp, according to the Mae La camp's top official, who goes only by the first name of Honest.

Mary's children were born into the refugee camp and she fears they will never see the outside world. (Fox News/Hollie McKay)

He lamented that the drop in donor funding has have also meant Karens working in the camp – including teachers – have been reduced to taking a skeletal salary, with even that expected to dissipate come November. By next year, the higher education programs will have been cut from the budget too.

“Most have no opportunity to even make a small income for their family, they aren’t allowed to go outside to work,” continued Honest. “The international community likely thinks the situation in Burma is changing, that it is becoming peaceful and the Karen people can go home. But we cannot. There is still a lot of armed conflict, it is not safe. And even if the Burmese government says they are negotiating for our return, it is the Army in charge. At any time, the violence can start all over again.”

International donors have steadily bowed out in recent years, following Burmese government claims that it has achieved peace with the Karen. The aid money and attention was siphoned off by other international crises and, more recently, to the plight of the mostly Muslim Rohingya.

Victims of landmines rely on their faith, and sing the gospel, to pass the day. (Fox News/Hollie McKay)

But despite the signing of a peace agreement in 2015 between the government and armed Karen groups, critics contend the apparent accord is superficial, and tensions below the surface are still boiling.

Despite have lost limbs and their eyesight, Karen refugees make jewels and trinkets in the hopes of earning some spare change. (Fox News/Hollie McKay)

For many, the notion of going home is fraught with even more fear and pain.

Mary, a 44-year-old widowed mother of two boys – aged seven and 11 – fled the intense fighting in Burma after the Army set fire to her village just over 11 years ago. Her mother died along the road to the Thai border, and since that day Mary has shut off all memory of life before being rendered a refugee.

“I’m afraid to go back. I cannot go back,” she explained. “We lost everything – there is no work, no land for us anymore. I do not remember anything from there anymore. I had to lose everything when I left.”

In addition to property, food, job and security concerns should they return to Burma, Karen refugees are also concerned about the inherent threat of landmines, unexploded ordnance and other remnants of war.

An International Rescue Committee (IRC)’s hospital – the only one on the expansive grounds – is filled to overflowing with patients. There is a shortage of trained medical staff, which is grapplles with outbreaks of dengue fever – spread by mosquito bites - which has already affected more than 100 children.

With immediate medical needs a top priority, the notion of adequate psychological assistance is a far away pipe dream.

Rev. Robert Htwa, one of the original camp founders and missionaries tending to the Karen, said some camps offer basic rehabilitation and counseling. But he stressed the funding cuts have meant only a small portion of those in need are able to receive even the most rudimentary help.

Depression, which is said to afflict around half the adults in the camp system, has brought with it drug addiction, and higher numbers of children are at risk of malnutrition and neglect.

Pregnant and post-partum women, too, are said to be among the highest portion of the refugee population suffering from depression and mental illness.

For now, life lingers in a forsaken limbo and the sense of sorrow is palpable.

“We don’t know what will happen,” Rev. Htwa added. “There is nowhere to go.”