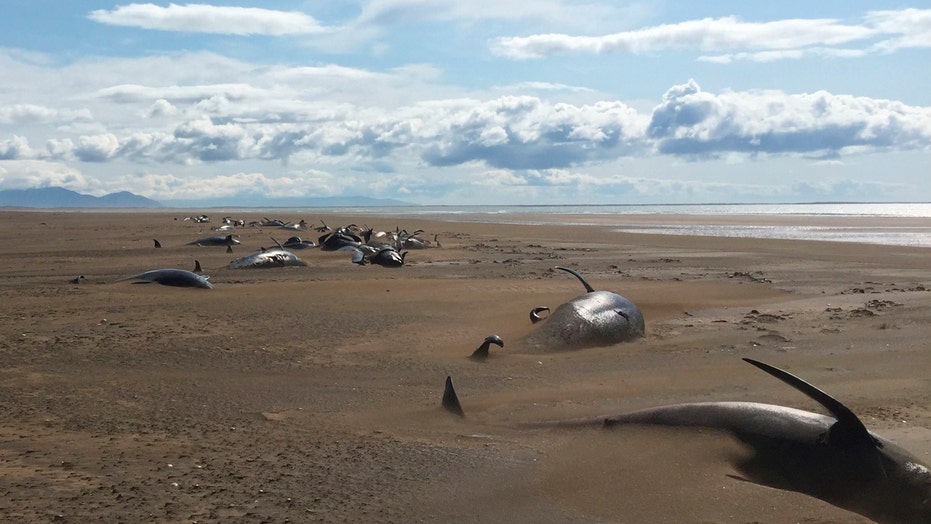 At least 50 dead whales were discovered washed up on a remote beach in Iceland by a group of sightseers Thursday.

Helicopter pilot David Schwarzhans with Reykjavik Helicopters told The Associated Press that he, along with several passengers, counted at least 50 long-finned pilot whales that washed up on the Löngufjörur beach on the Snaefellsnes Peninsula in western Iceland.

He said there could have been more as some of the beached whales were partly buried by the sand.

Some dozens of long-finned pilot whales lay dead on a remote beach in Iceland as they were discovered by tourists sightseeing in the Snaefellsnes Peninsula in western Iceland aboard a helicopter. (David Schwarzhans via AP)

It's not clear what caused the mass stranding but pilot whales are known to travel in large numbers which could explain the number of carcasses seen.

The whales were concentrated in one spot on the beach, many partially covered by sand. (David Schwarzhans via AP)

It is believed that the whales likely died of dehydration. The beach where the mammals were found is extremely isolated as it is inaccessible by car.

Marine biologist Edda Elisabet Magnusdottir told the Iceland Monitor that while it's hard to explain why the whales approached the beach, they likely got disoriented in the shallow waters. They use echolocation to locate one another and the sandy floor could’ve confused the pod.

It is believed that the whales likely died of dehydration. (David Schwarzhans via AP)

An autopsy report will be done to see how long the whales have been there.