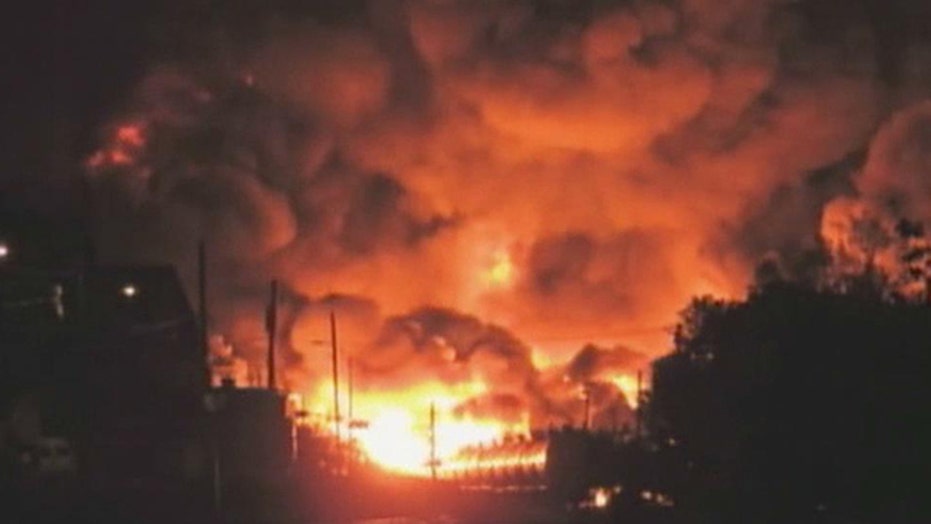 A large swath of a town in eastern Quebec was destroyed Saturday after a train carrying crude oil derailed, sparking several explosions forcing the evacuation of up to 1,000 people, killing at least one.

Several people were reported missing and officials reported one death in the town of Lac-Megantic (Lack-MAH-Gan-Tic), about 155 miles  east of Montreal.

The explosions ignited a blaze that sent flames shooting into the sky, and billowing smoke could be seen from several miles (kilometers) away hours after the derailment. Some of the train's 73 cars exploded and the fire spread to a number of homes in the town of 6,000 people.

Lac-Megantic resident Claude Bedard described the scene of the explosions as "dreadful."

"It's terrible," Bedard said. "We've never seen anything like it. The Metro store, Dollarama, everything that was there is gone."

"The flames in the sky were really impressive," said resident Pierre Lebeau.

The cause of the derailment was not immediately known.

Authorities set up perimeters as firefighters battled to control the fire, and worried residents looked on amid fears that some of their friends and loved ones may have died in their homes.

"We're told some people are missing but they may just be out of town or on vacation," Brunet told a news conference.

"Right now, there is big smoke in the air, so we have a mobile laboratory here to monitor the quality of the air," Blanchette said.

"We also have a spill on the lake and the river that is concerning us. We have advised the local municipalities downstream to be careful if they take their water from the Chaudiere River."

Firefighters and rescue workers from several neighboring municipalities, including Sherbrooke and Saint-Georges-de-Beauce, were called in to help deal with the disaster. A fleet of fire trucks from northern Maine were also deployed to the Quebec town, according to a spokesman at the sheriff's office in Franklin County. The town is about 135 miles (217 kilometers) north of the Maine border.

The train, reportedly heading toward Maine, belongs to Montreal Maine & Atlantic. According to the railroad's website, the company owns more than 500 miles (800 kilometers) of track serving Maine, Vermont, Quebec and New Brunswick.