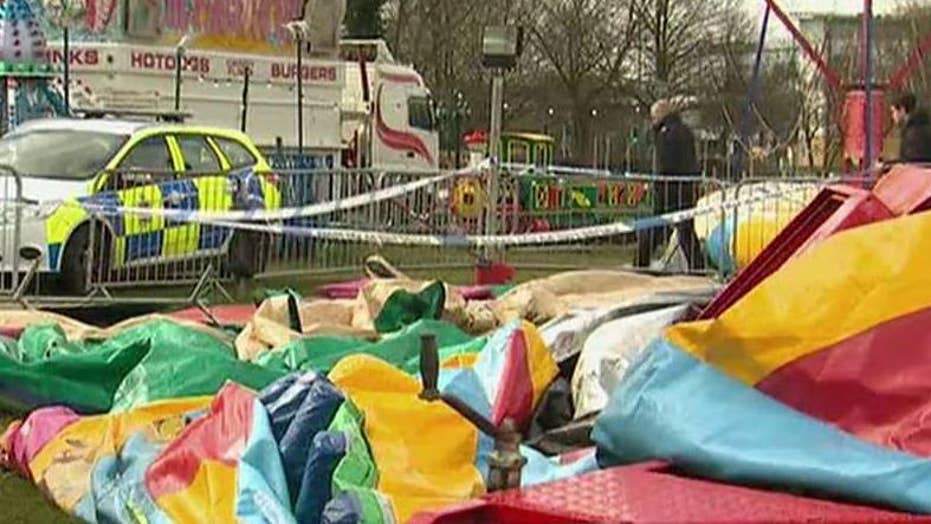 Two people were arrested on suspicion of manslaughter after a 7-year-old girl in Britain died over the weekend when the bouncy castle she was playing in was swept away by a strong gust of wind, Sky News reported Monday.

The inflatable attraction flew over trailers in a park on Saturday and landed at the bottom of a hill.

Summer Grant, from Norwich, was treated at the scene around 4 p.m. and taken by air to a hospital, but she was unable to be saved.

“It was a freak gust of wind that caught everyone unaware,” said Ray Smith, a representative of the Showman’s Guild of Great Britain. “It actually pulled the safety stakes out of the ground.”

A 27-year-old man and 24-year-old woman from the firm that runs the bouncy castle attraction were arrested on suspicion of manslaughter by gross negligence. Neither has been identified and both were later released on bail.

“Everyone here is absolutely devastated, in fact, everyone in the fairground industry is shattered by this,” Smith told Sky News. “It’s so appalling that this little girl came to have a lovely day out with her family and lost her life.”

Smith said if the winds had been consistently high, the castle and other inflatables would have been closed.

Families had gathered at Harlow Town Park in Essex for an Easter event.

Essex police were working with the Health and Safety Executive in their investigation into the incident. Police said they were aware of video footage and were working to obtain it.

Following the incident, among the tributes at the park's entrance was a bunch of flowers with a card that read "God has taken a beautiful girl for his angel. RIP Princess," Sky News reported.