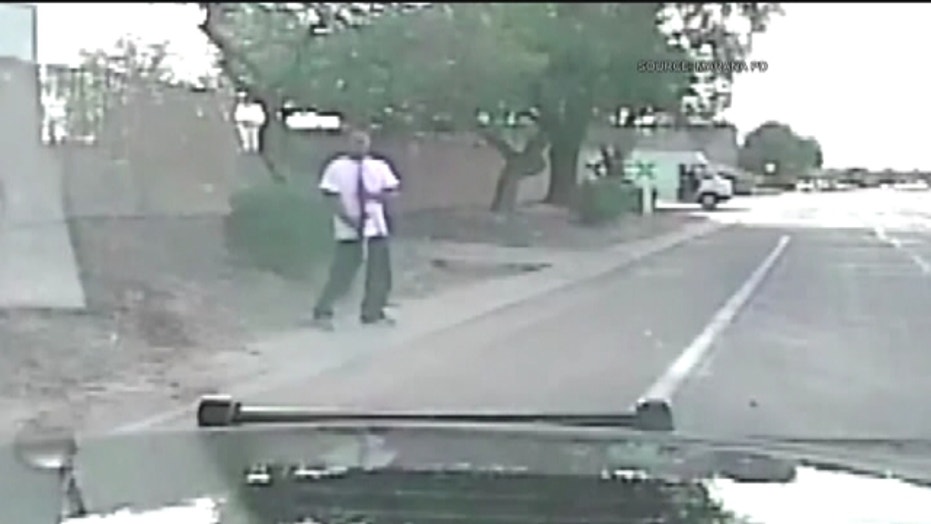 Police released dash cam video showing how a police officer used his cruiser to put an end to a crime spree in February that stretched from Tucson to Marana.

TUCSON, Ariz. (AP) – The Arizona police officer who used his cruiser to ram into an armed suspect has been accused of using excessive force in the past, resulting in a $20,000 settlement for a man who said the officer pointed a gun at him and choked him.

Officer Michael Rapiejko was with the New York Police Department at the time.

On Oct. 6, 2005, Luis Colon was driving with his wife and four children in Manhattan when he parked his car and got out. It's unclear from records whether Colon had been pulled over or whether he stopped on his own. Colon's attorney has not returned a request by the Associated Press for comment.

Colon said Rapiejko pointed a gun at him, ordered him to get back in the car and threatened to shoot him. He later pulled Colon out of the car, handcuffed him and choked him, the complaint states.

Colon was arrested and charged with obstructing governmental administration, disorderly conduct and resisting. All charges were eventually dropped. Colon sued Rapiejko in May 2008, and in December, the city settled with Colon for $20,000.

That was nearly a decade before the Feb. 19 incident in which Rapiejko used his cruiser to ram into an armed man who had threatened to kill himself.

The incident in Marana, a small town just north of Tucson, gained worldwide attention after the release of a dash cam video showing the dramatic encounter.

Mario Valencia, the 36-year-old suspect who is shown on video walking around with a hunting rifle, pointing it at himself and threatening to commit suicide before firing the weapon into the air, was not seriously injured. He has been charged with assault on an officer and remains jailed.

Police say Valencia committed a string of violent crimes that day both in Tucson and later in Marana, where he allegedly stole the rifle and ammunition from the local Wal-Mart store. In total, Valencia faces about 15 criminal charges.

"In watching the video, I think it was clear that it was not the appropriate action and that my client was not threatening to anybody except for himself," Michelle Cohen Metzger said Wednesday.

Policing experts say Rapiejko's use of his patrol car to stop Valencia was unconventional and even outrageous, but justified because of the danger Valencia posed to officers and others around him.

The Marana Police Department has defended his actions, saying Rapiejko prevented what could have been a tragedy if Valencia continued walking toward a row of businesses in the area.

Sgt. Chris Warren said the department was aware of the New York City incident when it hired Rapiejko, but it was not of concern because Rapiejko had been cleared by NYPD internal affairs and by a citizen review panel that investigated the incident.

"There were no red flags, no history of misconduct, and when we did our background investigation, there was nothing to eliminate him from the process," Warren said.

Rapiejko worked for the Tucson Police Department before joining Marana early last year. Tucson police have not said why Rapiejko left the department.

The Pima County Attorney's Office has cleared Rapiejko of any wrongdoing, declining to file charges against him.