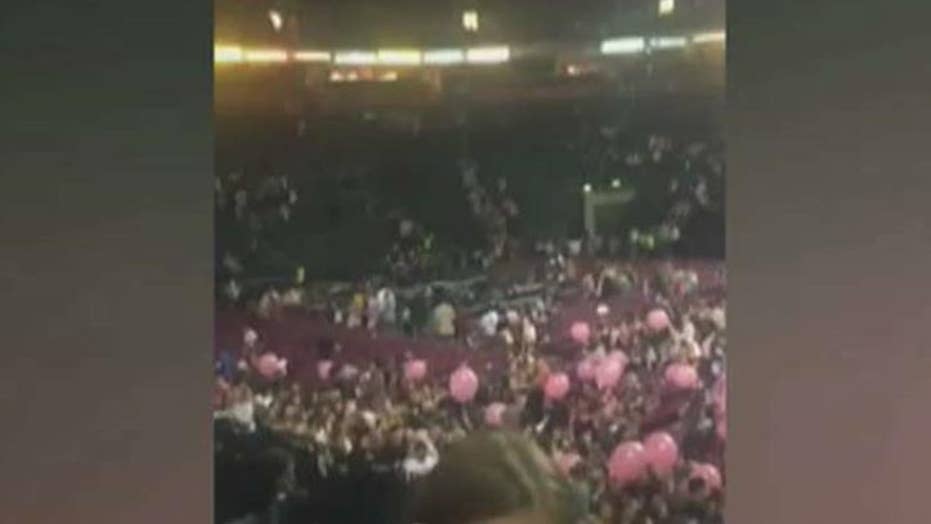 At least 19 dead. 59 injured in blast at Manchester concert

At least 19 people were killed and 59 others were injured Monday when an explosion rocked an Ariana Grande concert in Manchester, England.

Greater Manchester Police said in a statement that they were treating the blast at Manchester Arena as a "terrorist incident until police know otherwise."

Britain's terrorist threat level has been set at "severe" in recent years indicating an attack is highly likely. Monday marked the deadliest attack to hit the U.K. since the July 7, 2005 bombings that killed 52 people in central London.

A senior U.S. government official told Fox News that if the Manchester blast was terrorism, it showed a level of sophistication beyond recent U.K.-based plots that involved using knives and vehicles as weapons.

Greater Manchester Police Chief Constable Ian Hopkins said that the injured had been taken to six area hospitals. There was no indication of the extent of people's injuries. Sky News reported that some of the wounded had suffered shrapnel injuries.

The U.S. government official told Fox that reports that the explosion happened near an arena exit, as well as reports of shrapnel injuries, indicated premeditation and a plot that may have been directed by a foreign terrorist organization.

Some witnesses reported hearing two blasts, a discrepancy that could not immediately be reconciled. Around three hours after the attack, police tweeted they had carried out a controlled explosion in a park near the arena.

Spokesman Joseph Carozza said Grande, who was performing at the arena as part of her "Dangerous Woman" world tour, was "okay" and added, "we are further investigating what happened."

The singer and her manager tweeted their own reactions late Monday.

Witnesses described panic as concertgoers rushed to get out of the arena. Video from inside the arena showed people screaming as they made their way out amid a sea of pink balloons.

Concertgoer Sasina Akhtar told the Manchester Evening News that Grande had just finished her last song when "there was an explosion behind us at the back of the arena. We saw young girls with blood on them, everyone was screaming and people were running. There was lots of smoke."

David Richardson, who attended the show with his 13-year-old daughter, told the MEN that he heard two explosions just after the show.

"It was about 40 feet behind us near one of the exits. We just thought it was people messing about, then it happened again. Another explosion sounded. Then we saw the smoke. Everyone just fled."

Majid Khan, 22, said she heard a "huge bomb-like bang that hugely panicked everyone and we were all trying to flee the arena."

"Everyone was in a huge state of panic, calling each other as some had gone to the toilet whilst this had gone off, so it was just extremely disturbing for everyone there."

Another witness, Oliver Jones, 17, told Sky News he was in the bathroom when he heard "a loud bang."

"The bang echoed around the foyer of the arena and people started to run," Jones said. "I (saw) people running and screaming towards one direction and then many were turning around to run back the other way. Security was running out as well as the fans and concertgoers."

Manchester Victoria train station, which is under the arena, was also evacuated and all trains were canceled, though there were no reports of injuries there.

Stranded concertgoers reportedly were waiting for rides home in nearby bars and hotels. Sky News reported that some city taxi drivers were offering free rides to help clear traffic out of the city center.

Greater Manchester Mayor Andy Burnham tweeted a message urging people to follow the Twitter hashtag "RoomforManchester" if they were in need of a place to stay.

British Prime Minister Theresa May said that her thoughts were with the victims of "what is being treated by the police as an appalling terrorist attack."

The U.S. Embassy in London advised Americans in the U.K. to contact family members and advise that they were safe.

"U.S. citizens should heed guidance from local authorities and maintain security awareness," a statement from the embassy read.

Speaker of the House Paul Ryan, R-Wis., tweeted his condolences to the victims of the explosion.

The Dangerous Woman Tour is the third concert tour by Grande to support her third studio album, Dangerous Woman. From Manchester the tour was to move through Europe, including Belgium, Poland, Germany, Switzerland and France, through the summer with stops in Brazil, Chile, Argentina, Costa Rica, Mexico and on to Japan, Thailand, the Philippines, New Zealand, Australia and more.