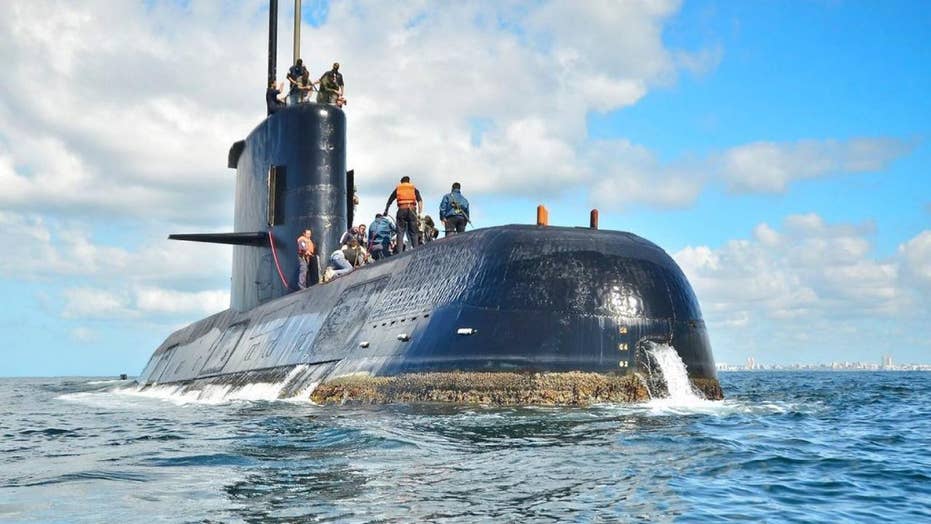 The missing Argentinian submarine that has been missing for one year has been discovered 2,600 feet deep in the Atlantic Ocean.

The Argentine submarine that was lost deep in the sea with 44 crew members on board may have suffered from a partial implosion close to the seabed, a senior official said Sunday as officials released photos of the wreckage.

The country's navy announced Saturday that the ARA San Juan was discovered at a depth of 2,975 feet in the waters off the Valdes Peninsula and was surrounded by a field of rubble, with underwater turbulence making visibility difficult.

Naval Capt. Enrique Balbi said the working theory was that the vessel had partially imploded while at sea, deep down near the seabed, Sky News reported.

The wreckage of the ARA San Juan, which was discovered at a depth of 2,975 feet in the waters off the Valdes Peninsula. (Argentine Navy)

Photos released on Sunday showed the wreckage of the submarine in the Atlantic Ocean, with sections of the vessel lying on the ocean floor. Parts of its propellers were buried and debris was scattered up to 230 feet away.

The pieces of the submarine, which included a propeller and the sub's bow with torpedo launching tubes, had been "crushed inwards," according to Naval Captain Enrique Balbi. (Argentina Navy)

The pieces of the submarine, which included a propeller and the sub's bow with torpedo launching tubes, had been "crushed inwards," according to Balbi.

The sub's discovery was announced just two days after families of the missing sailors held a one-year commemoration for its disappearance on Nov. 15, 2017. The San Juan was returning to its base in the coastal city of Mar del Plata when contact was lost.

The ARA San Juan's propellers were buried and debris was scattered up to 230 feet away on the sea floor. (Argentine Navy)

The navy said previously the captain reported on November 15, 2017 that water entered the snorkel and caused one of the sub's batteries to short-circuit. The captain later communicated that it had been contained.

Hours later, an explosion was detected near the time and place where the San Juan was last heard from. The navy said the blast could have been caused by a "concentration of hydrogen" triggered by the battery problem reported by the captain.

The German-built diesel-electric TR-1700 class submarine was commissioned in the mid-1980s and was most recently refitted between 2008 and 2014. During the $12 million retrofitting, the vessel was cut in half and had its engines and batteries replaced.

Relatives of the crew of the ARA San Juan submarine embrace outside the navy base in Mar del Plata, Argentina, Saturday, Nov. 17, 2018. Argentina's navy announced early Saturday, that they have located the missing submarine ARA San Juan in the Atlantic a year after it disappeared with 44 crew members aboard. (AP Photo/Federico Cosso)

After announcing the discovery of the submarine, Defense Minister Oscar Aguad disclosed that the country will be unable to recover the vessel because Argentina lacks "modern technology" capable of "verifying the seabed."

It remained unclear what the next steps could be.

In a statement to The Associated Press, Ocean Infinity CEO Oliver Plunkett said authorities would have to determine how to advance. "We would be pleased to assist with a recovery operation, but at the moment are focused on completing imaging of the debris field," he said.

Navy commander Jose Luis Villan urged "prudence," saying that a federal judge was overseeing the investigation and would be the one to decide whether it was possible to recover a part or the entirety of the ship.

Search continues for the 44 crew members on board.

Without adequate technological capabilities, Argentina would likely need to seek assistance from foreign countries or pay Ocean Infinity or another company. The country is facing a currency crisis and double-digit inflation that has led the government to announce sweeping measures to balance the budget and cement a financing deal with the International Monetary Fund.

But relatives of crew members were determined to fight for it to be quickly surfaced.

Isabel Vilca, the half-sister of crewman Daniel Alejandro Polo, told the AP that the discovery was just the beginning.

"We do know they can get it out because Ocean Infinity told us they can, that they have equipment," said Luis Antonio Niz, father of crew member Luis Niz. "If they sent him off, I want them to bring him back to me."