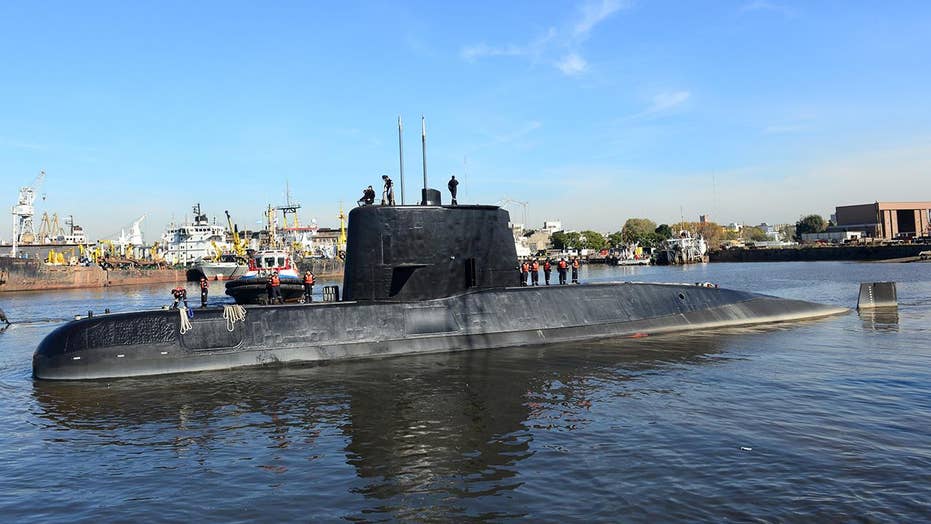 Search continues for the 44 crew members on board.

A sound detected in the search for a missing submarine with 44 crew members aboard is consistent with a non-nuclear explosion, officials in Argentina said Thursday.

Argentine Navy spokesman Enrique Balbi said at a news conference the relatives of the crew have been informed and that the search will continue until there is full certainty about the fate of the ARA San Juan.

"According to this report, there was an explosion," Balbi told reporters. "We don't know what caused an explosion of these characteristics at this site on this date."

The disclosure was made as more help arrived in a multinational search as concern grew that the vessel's oxygen supply could soon start to run out.

Britain's Ministry of Defense sent a special helicopter with emergency life support pods to join the hunt that includes planes and ships from a dozen nations.

Balbi said Wednesday that searchers were returning to a previously scanned part of the ocean after determining that a previously unnoticed "hydro-acoustic anomaly" was detected Nov. 15, just hours after the final contact with the ARA San Juan.

He described the blast, which was detected around the same time that the submarine sent its last signal last week, as "abnormal, singular, short, violent" and "non-nuclear."

The ARA San Juan disappeared Wednesday in the icy waters of the South Atlantic.

Argentine navy ships as well as a U.S. P-8 Poseidon aircraft and a Brazilian air force plane would return to the area Thursday to check out the sound, according to Balibi, which originated about 30 miles north of the submarine's last registered position.

U.S. Navy Lt. Lily Hinz later said the unusual sound detected underwater could not be attributed to marine life or naturally occurring noise in the ocean.

"It was not a whale, and it is not a regularly occurring sound," Hinz said.

An Argentine flag reading in Spanish "Come on marines, the great naval family and the Argentines are with you and pray for you" hangs from the fence at the naval base in Mar del Plata, Argentina, Sunday, Nov. 19, 2017 (AP Photo/Vicente Robles)

A U.S. Navy plane detected an object Wednesday near the area the submarine sent its last signal during a search flight over the South Atlantic, a witness told Reuters after traveling on board the plane.

The crew emphasized that the object could not be identified, and it was not known if it was related to the ARA San Juan, the news agency reported.

The San Juan, a German-built diesel-electric sub, went missing as it was sailing from the extreme southern port of Ushuaia to the city of Mar del Plata, about 250 miles southeast of Buenos Aires.

"They sent a piece of crap to sail. They inaugurated a submarine with a coat of paint and a flag in 2014, but without any equipment inside. The navy is to blame for its 15 years of abandonment."

Relatives of the crew who have gathered at the base to receive psychological counseling broke into tears and hugged each other after they received the news Thursday.

"They sent a piece of crap to sail," Itati Leguizamon, wife of submarine crew member German Suarez told the Associated Press. "They inaugurated a submarine with a coat of paint and a flag in 2014, but without any equipment inside. The navy is to blame for its 15 years of abandonment."

The German-built diesel-electric TR-1700 class submarine was commissioned in 1985 and was most recently refit in 2014.

During the $12 million retrofitting, the vessel was cut in half and had its engines and batteries replaced, according to the AP.

Hopes by familiy members were buoyed last week after brief satellite calls were received and when sounds were detected deep in the South Atlantic, but  experts later determined that neither was from the missing sub.

Argentine Navy officials embrace inside the Mar de Plata Naval Base after Argentina's Navy announced that a sound detected during the search for the missing ARA San Juan submarine is consistent with that of an explosion, in Mar de Plata, Argentina, Thursday, Nov. 23, 2017. (AP Photo/Esteban Felix)

"They haven't come back and they will never come back," said Jesica Gopar, wife of submarine officer Fernando Santilli, choking back tears. "I had a bad feeling about this and now it has been confirmed."

Experts worry that oxygen for the crew would last only seven to 10 days if the sub was intact but submerged. Authorities do not know if the sub rose to the surface to replenish its oxygen supply and charge batteries.

More than a dozen airplanes and ships are participating in the multinational search despite stormy weather that has caused waves of more than 20 feet. Search teams are combing an area of some 185,000 square miles, which is roughly the size of Spain.

Relatives of the crew continue to wait at a naval base in Mar del Plata, as the case grips Argentina, SkyNews reported.

The hashtags "Los 44" (The 44) and Enrique Balbi have become trending topics on Twitter and relatives have featured on the front of newspapers in the country.

The U.S. Navy has sent two P-8 Poseidons, a naval research ship, a submarine rescue chamber and sonar-equipped underwater vehicles. There are also U.S. Navy sailors from the San Diego-based Undersea Rescue Command are also helping with the search.