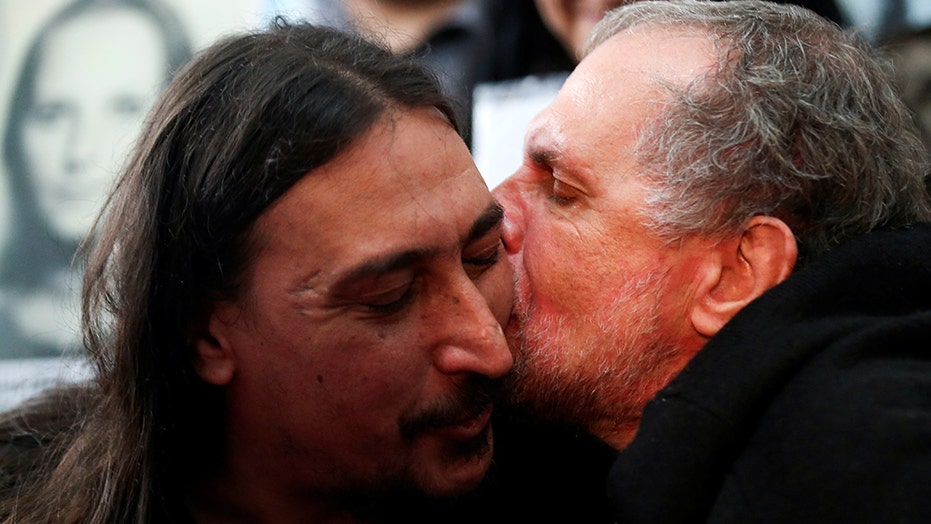 A man whose father and pregnant mother were abducted and likely killed during Argentina’s brutal dictatorship more than 40 years ago was reunited with his biological family Thursday.

Javier Matias Darroux Mijalchuck, who was born in 1977, was just four months old when his parents disappeared at the hands of government forces in Buenos Aires. He was later adopted by a family who did not know his background.

Javier Matías Darroux Mijalchuk, center, is greeted by his biological uncle Roberto Mijalchuk, right, as Estela de Carlotto, left, president of The Grandmothers of Plaza de Mayo, and others applaud during a news conference in Buenos Aires, Argentina. (AP)

A few years ago, he began to suspect that he may have been the child of disappeared dissidents and sought the help from The Grandmothers of the Plaza de Mayo, a human rights group which works to identify children of dissidents and reconnect them with their relatives.

After DNA testing, the group said Darroux is the 130th child who the organization has identified.

“The restitution of my identity is, for me, a tribute to my parents, a caress to the soul, a symbol of memory, truth, and justice,” he said at a press conference Thursday, also thanking his biological uncle, Roberto Mijalchuk, who he said had searched for him for 40 years.

“It’s a symbol that, if I have to define it with a moment, there isn’t a more significant one than the embrace with uncle, when after 40 years of search he could: ‘Are you Javi?’ and embrace like nobody has ever done before, and no one will be able to do again,” he added, according to the BBC.

Darroux said he will now seek to learn the fate of his parents, Juan Manuel Darroux and Elena Mijalchuk, as well as to find the biological sister he suspects he may have.

The Grandmothers of the Plaza de Mayo say DNA tests have determined the identity of Javier Matías Darroux Mijalchuk, taken from his mother as a baby by the country's former dictatorship. This brings the number of such cases to 130. (AP Photo/Marcos Brindicci)

Human rights groups estimate that about 30,000 people were killed by Argentina’s military government – many of them tortured beforehand – during the nation’s brutal 1976 to 1983 military dictatorship. Most were students, union leaders or dissidents who were murdered for their political beliefs.

In some cases, young children of the murdered were put up for adoption and were never told of their biological parents. It is widely believed there are still hundreds of adopted children of dissidents who still have not been identified.