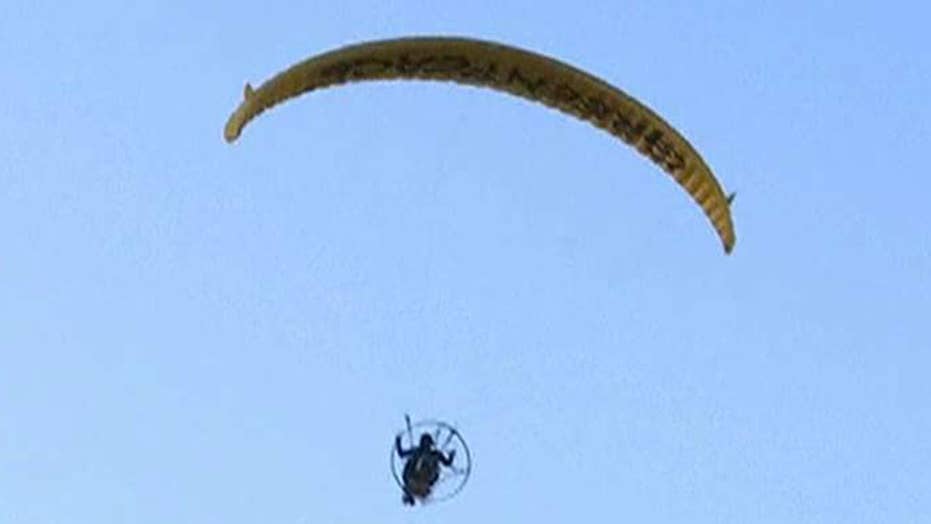 The Greenpeace activist entered a no-fly zone above the president.

A 55-year-old man was arrested Sunday in connection to a protest that saw him paraglide within meters of President Donald Trump as he visited his golf course in Scotland on Friday, officials said.

The man, not yet identified, was spotted breaching a no-fly zone carrying a banner reading, “Trump: Well Below Par,” as he flew just meters past the U.S. leader at his Turnberry resort in Ayrshire.

“Police Scotland can confirm that a 55-year-old man has been arrested in connection with an incident when a powered parachute was flown in the vicinity of the Turnberry Hotel around 9.45 pm on Friday, 13 July 2018,” a spokesman told the Independent in a statement.

The stunt, orchestrated by environmental group Greenpeace, was slammed by police who claimed the man had placed himself in “grave danger” as snipers watched from the hotel’s roof.

Police said the protester breached a no-fly zone over the hotel and committed a criminal offense, but the environmental group said it had informed police about the stunt before it took place.

Footage of the incident shows Trump cutting across the grass, quickly heading to the entrance of the resort soon after the glider appeared.

Trump and his wife, Melania, are spending the weekend out of the spotlight at his Scottish golf resort at Turnberry, on the western coast, ahead of his summit with Russian President Vladimir Putin in Helsinki on Monday.