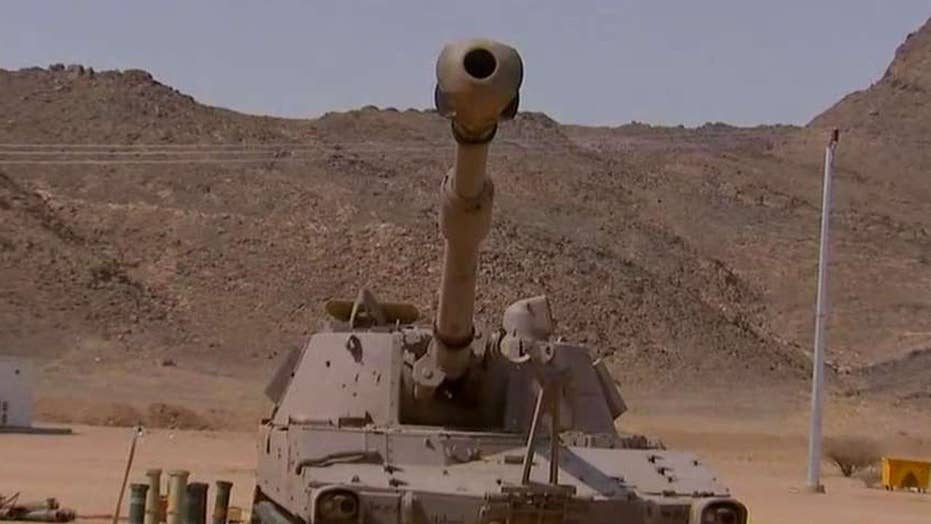 A look at Saudi, US military operations in Yemen

More than two dozen House lawmakers are supporting a bill to halt U.S. military involvement in Saudi Arabia’s war against the Houthi rebels in war-ravaged Yemen.

The bill, which requires the removal of U.S. forces from the “unauthorized hostilities” in Yemen within 30 days under the War Powers Act, was introduced by Rep. Ro Khanna, D-Calif., who told Fox News that 30 legislators -- Republicans and Democrats -- are backing the bill. He said he is optimistic the measure will reach the floor for a vote.

“Though we are in negotiations with House leadership over differences on whether this use of military support invokes the War Powers Act, I am hopeful we will see a vote on this in the coming weeks,” Khanna said.

He stressed that the bill would not prevent the Pentagon from going after Al Qaeda in the Arabian Peninsula and ISIS, which for the first time has established a foothold in Yemen.

People walk to the site after a Saudi-led coalition airstrike in Arhab area, north of Sana'a, Yemen in August 2017 (REUTERS/Khaled Abdullah)

The Pentagon did not immediately respond to a request for comment.

The U.S. is behind a Saudi coalition of Arab nations that went to Yemen to restore the government of President Hadi to power.

Hodeida, Yemen (30 April 2017). Jamila Ali Abdu Qasem, 7-year-old girl sick with malnutrition and intestinal worms photographed here two days before she died at the Al Thawra Public Hospital in Hodeidah. From the nothern Yemeni province of Hajjah, Jamila's parents were unable to pay for her transportation fees to Sana'a in order to get proper diagnosis and treatment for her condition. Hundreds of children in Yemen die everyday from preventable diseases and conditions. @ICRC/Ralph El Hage

The rebels have taken control of prominent parts of the country – including the capital Sana’a – and forced Hadi into exile in Saudi Arabia.

In two years, the devastating conflict has destroyed most of the country and claimed the lives of more than 10,000 people. It also has led to an unprecedented cholera outbreak that has infected more than 700,000 people and displaced millions in what was already deemed the poorest country in the Middle East even before the war.

The U.S. support to the Saudis has consisted of providing training, midair refueling for jets to conduct airstrikes and offering “targeting assistance” to Saudi forces on the ground.

But critics have complained that the airstrikes have killed civilians and have accused the U.S. of being partly responsible.

Even if the bill were to get through Congress, it is unlikely that President Trump will support it.

Trump has applauded the Saudi monarchy for its “strong action against Houthi militants,” and has consistently denounced Iran for attempting to spread its influence in the region.

Yemen Ambassador to Washington Ahmed Awad Bin Mubarak has praised the Trump administration for its support and for sending “positive signals, which were not as clear in the past, that it will not accept the continuous meddling of Iran in Yemen by supporting the Houthis.”

“This was articulated in the president’s strategy on Iran, which Yemen welcomes and fully supports,” Mubarak told Fox News. “The strategy clearly states how the Islamic Revolutionary Guard Corps uses Houthis as puppets to disguise Iran’s role in destabilizing the region by using sophisticated missiles and explosive boats to attach innocent civilians and restrict freedom of navigation in the Red Sea.”

Kamran Bokhari, a senior analyst at Geopolitical Futures, said the war is actually “creating greater room for jihadist groups (both Al Qaeda and ISIS) to operate” in Yemen, posing a greater risk to Saudi Arabia and the U.S.

Mubarak accused some in the media, the United Nations and human rights groups of shielding Iran and using misleading facts and figures to falsely paint the Saudi coalition -- including the U.S. -- as the main perpetrators of the bloodshed.

Hodeida, Yemen. (2 May 2017). Little boy lies on a bed at the Al Thawra Public Hospital in Hodeida. Due to lack of proper medical care in nearby provinces, people have no choice, but to come to this hospital in Hodeida, which deals with over 1000 newcomers everyday. @ICRC/Ralph El Hage

Mubarak also lashed out at a new U.N. report including the Saudi Arabia coalition on a blacklist of child rights violators in the Secretary-General’s Annual Report on Children and Armed Conflict.

The report accused the coalition of attacking schools and hospitals and for killing and maiming 683 children in 2016.

The ambassador said the report was “misinformed due to the challenges the UN faced in monitoring the situation on the ground and the reliance on non-credible sources,” and that the report also “failed to mention Houthis and their allies are the cause of this war.”

“The Houthis have recruited thousands of children into their militia and are responsible for killing and maiming many others by land mines and indiscriminate shelling of civilians,” he told Fox News.

The U.N. did include the Houthis in the blacklist report, but pinned them for causing slightly less collateral damage – the killing or maiming of 414 minors. Critics of the Saudi coalition stress that because they are the ones with air power, their ability to harm is far more potent.

Saudi Arabia’s U.N. Ambassador Abdallah al-Mouallimi also has condemnd the report, saying that the “brunt of responsibility for the violence must rest in the hands of the Houthi opposition.”

Mubarak insisted the war was never his government’s choice or making.

“As a democratically elected government, we had no choice but to defend our country and fight the fire that the Houthis started,” he said.

“Some also tend to believe that the government and the coalition seek to annihilate the Houthis; this could not be further from the truth," he said.

“We were and still are ready to engage in peace talks. The Houthis can – at any time – stop the war and heed the international community’s call to end their aggression. They can be part of the new Yemen, but only as a political party, not a militia.”