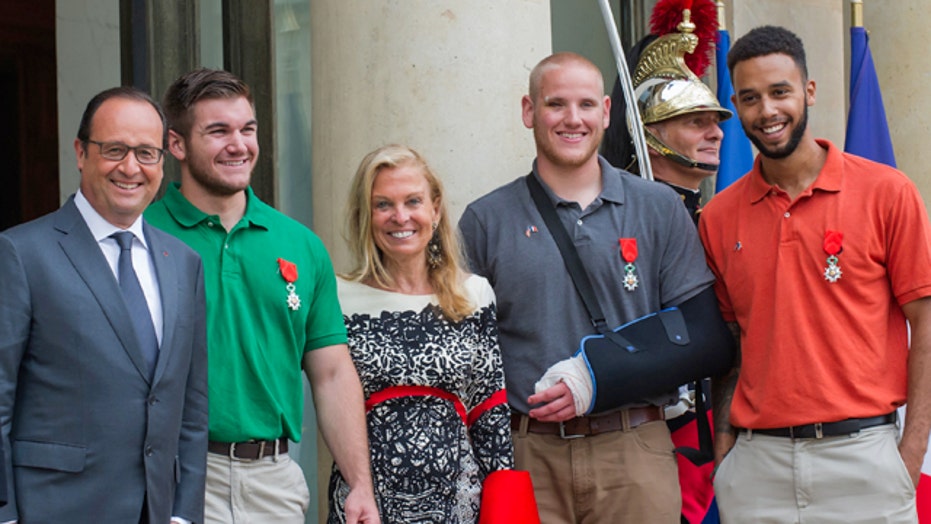 The three Americans who helped thwart a massacre on board a high-speed European train were awarded the Legion d'honneur (Legion of Honor), France's highest decoration, by the country's president Monday.

French President Francois Hollande praised the actions of the three men, saying "You behaved as soldiers but also as responsible men." Hollande added that the men demonstrated "that faced with terror, we have the power to resist ... You also gave a lesson in courage, in will, and thus in hope."

It was an unusual ceremony for the French president's office too, as dozens of photographers loudly shouted out the Americans' names as they approached Hollande standing on the steps of the palace-- unlike the quieter, more-subdued welcome for visiting heads of state. The four men listened to a translation of Hollande's speech through earpieces, and the visibly proud mothers of Stone and Skarlatos looked on.

Stone left later Monday for Ramstein, Germany, where U.S. air power in Europe is based, and then went for a military medical check at Landstuhl Regional Medical Center, according to spokesman Juan Melendez.

Skarlatos also traveled Monday to Germany "to accompany his friend after the traumatic experience they went through together," Melendez said. Sadler's plans were not made public.

Navy Capt. Jeff Davis, a Pentagon spokesman, said Monday the U.S. military services are considering "appropriate awards to recognize their heroic actions." Those recommendations would be up to each individual service. He added that it also will be up to each service's uniform regulations to determine whether Stone and Skarlatos can wear the Legion of Honor; generally foreign awards are not worn except "under certain circumstances when you're in dress uniform."

Davis added that, "we continue to be very proud of Airman Spencer Stone and his friends, who took immediate action to stop that attack and subdue the armed gunman.  Airman Stone is on the road to recovery. We do thank our French partners for taking care of him."

On Sunday evening, Stone, who was stabbed and slashed with a box cutter during the melee, described his version of the events on the train for the first time during a press conference at the U.S. ambassador's residence in Paris.

The 23-year-old said he was waking up from a deep sleep when Skarlatos "just hit me on the shoulder and said 'Let's go.'"

Stone and Skarlatos, 22, moved in to tackle the gunman, identified as 26-year-old Moroccan Ayoub El-Khazzani, and take his assault rifle. Sadler, 23, then moved in to help subdue the assailant. "All three of us started punching" him, Stone said. Stone said he choked El-Khazzani unconscious.

On Monday, Hollande said that with Skarlatos' words, a "veritable carnage" was avoided.

"Since Friday, the entire world admires your courage, your sangfroid, your spirit of solidarity," the French president said. "This is what allowed you to with bare hands -- your bare hands -- to subdue an armed man. This must be an example for all, and a source of inspiration."

"When most of us would run away, Spencer, Alek and Anthony ran into the line of fire, saying 'Let's go.' Those words changed the fate of many," Hartley said Sunday.

Asked if there were lessons, Sadler had one for all who find themselves in the face of a choice.

"Do something," he said. "Hiding, or sitting back, is not going to accomplish anything. And the gunman would've been successful if my friend Spencer had not gotten up. So I just want that lesson to be learned going forward, in times of, like, terror like that, please do something. Don't just stand by and watch."

El-Khazzani on Monday was being questioned by French counterterrorism police outside Paris.

His lawyer, Sophie David, told Le Monde newspaper the gunman is ill-educated, emaciated, and told her he had spent the past six months traveling between Belgium, Germany and Austria, as well as France and Andorra. She said he told her he only intended to rob the train with a cache of guns he came across in a public garden near the train station and is "dumbfounded" that it is being treated as an act of terrorism.

A French passenger was the first to try to stop the attacker and was also honored Monday, but he did not want his identity publicly known, Hollande said, who added "I understand" the decision.

Hollande said another passenger, French-American citizen Mark Moogalian, also intervened. Moogalian is hospitalized with a gunshot wound from the incident -- and his wife told Europe-1 radio Monday that he, too, "is among the heroes in this story."

Isabella Risacher-Moogalian described hiding behind train seats from the attacker and then seeing her husband wounded. "He looked at me and said `I'm hit, I'm hit.' He thought it was over and he was going to die," she said.