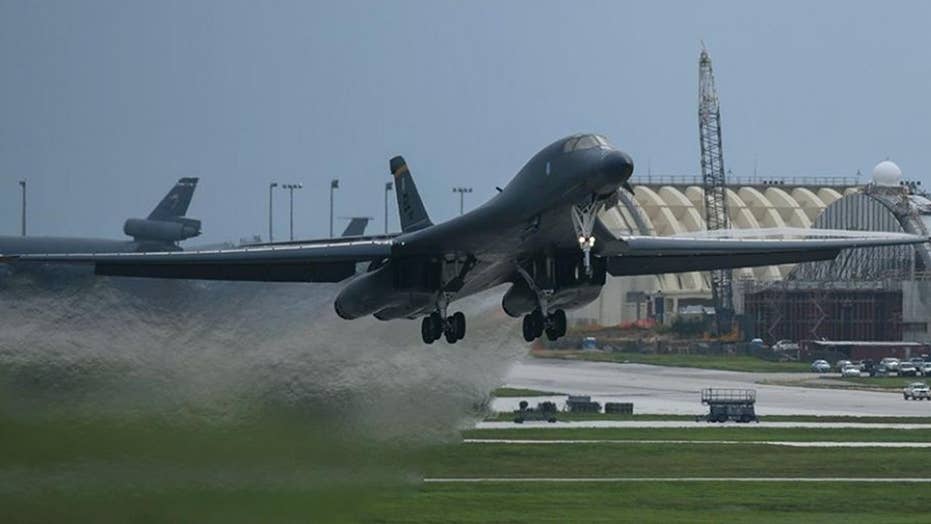 The American B1-B bombers took off from Guam in show of force to Pyongyang before President Trump's trip to Asia; national security correspondent Jennifer Griffin reports from the Pentagon.

Two B-1B bombers flew near the Korean peninsula on Thursday as part of a previously scheduled operation, the U.S. Air Force confirmed.

The Air Force, in tangent with Japan Air Self-Defense Force fighters and the Republic of Korea Air Force, conducted a planned, bilateral mission in the area, according to a statement from the Pacific Air Force.

The two B1-B Lancers reportedly took off from Andersen Air Force Base in Guam and flew south of Korea and west of Japan to join Koku Jietai, or the Japanese fighters. They then flew over the Korean Peninsula to meet with the Korean fighters in the Yellow Sea. After the mission was over, the jets all flew back to their original locations.

WHITE HOUSE: NKOREA COULD BE LISTED AS TERRORISM SPONSOR

“The bilateral continuous bomber presence (CBP) mission was planned in advance, to include coordination with the JASDF and ROKAF, and was not in response to any current event,” the Pacific Air Force said.

Earlier Thursday, the North Korean regime acknowledged the flyover and said it was done to “threaten and blackmail” the government, Yonhap News Agency reported.

The state-run Korean Central News Agency reportedly claimed that the mission was to train for a nuclear strike on North Korea.