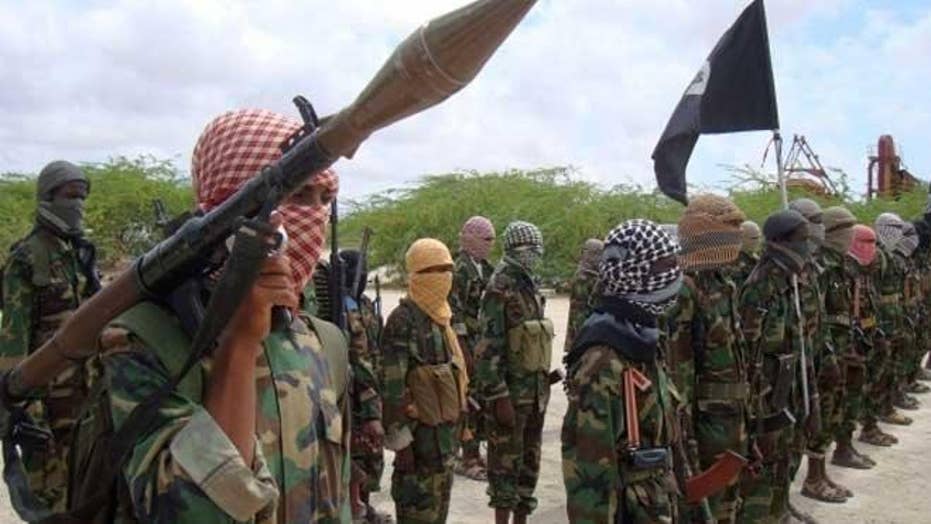 Approximately 40 Americans are actively serving in the ranks of the Al Qaeda-linked terrorist group responsible for dozens of attacks and hundreds of deaths in East Africa, multiple experts confirmed. The number is at least 10 times previous estimates, and underscores a grim radicalization threat that has operated largely in the shadow of ISIS’ recruiting.

"In Minnesota, you have a very large Somali-American community, so Al Shabaab is attracted to potential recruits there,” said David Ibsen, executive director of the U.S.-based Counter Extremism Project, a nonprofit co-founded by former Sen. Joe Lieberman, I-Conn. “They have the ethnic, national ties, and they can feed on first-generation or immigrant individuals, feelings maybe of aloofness or being disaffected or marginalized, and can entice them to come back to their home country to have a sense of belonging.  Quite frankly, have adventure."

Americans in Al-Shabaab fill a variety of different positions, whether it's recruiting, leadership, commandos, suicide bombers.”

American recruits are mostly in Somalia and Kenya, fighting for the U.S.-designated terror group behind the September 2013 attack at the Westgate Shopping Center in the Kenyan capital of Nairobi, where 67 people were killed and more than 175 wounded. The group also is suspected of causing an explosion aboard a passenger jet over Somalia Tuesday which killed one and forced an emergency landing.

Omar Shafik Hammami, an Alabama-born radical who joined Al Shabaab in 2006 and adopted the nom de guerre Abu Mansoor Al-Amriki, was one of the highest-profile Americans in the terrorist group before fellow fighters executed him in 2013 for what they considered his selfish pursuit of glory. Another American, Jehad Serwan Mostafa, or Anwar al-Amriki, is a commander in the terror group and is believed to specialize in the training of foreign recruits.

Lower-profile American converts have filled roles in specialized commando units, often taking part in deadly cross-border raids from Somalia into Kenya. One American was even seen in a propaganda video bragging about his murderous exploits while brandishing an AK-47 assault rifle. Yet another became the first American to die as a suicide bomber on African soil.

“Americans in Al-Shabaab fill a variety of different positions, whether it's recruiting, leadership, commandos, suicide bombers,” Ibsen said. “So the opportunity is there to engage in extensive jihad operations."

As with other terrorist groups, Al Shabaab uses the Internet to sell its lifestyle online. That gives it a wide reach that extends well beyond the Somali enclave in Minnesota.

“Although American recruits principally come from Minnesota, there’s also a small band of recruits constantly coming from Maryland, and other states,” terrorism analyst Lisa Daftari said. “The supply route has not been closed down; there is still a constant stream of Americans leaving to join Al-Shabaab in Africa.”

Somali-American Mohamed “Miski” Hassan, prior to his arrest in December, had for decades coerced Somali-Americans to come back to Africa and become jihadists. He helped arrange one-way circuitous travel arrangements, aimed at evading law enforcement scrutiny. But his capture seems to have had little effect on stemming the terror group's recruiting effort.

Ibsen said stateside handlers help steer recruits to Africa once they have been radicalized.

“Al-Shabaab has developed a very good online recruitment pipeline in the U.S.,” he said. “When they try to recruit from the Somali-American community, it's very enticing for them to offer a sense of community, a community of believers, who have a real sense of purpose.  Al-Shabaab is very strict in terms of their doctrine, their ideology.  So they're going to engage in very violent, you could say 'adventurous,' activities that are attractive to young men, particularly young men who may be disaffected or marginalized."

Disaffected Somali-Americans include Khaalid Adam Abdulkadir, who, on a Twitter account closed down by the FBI, was seen smiling, while tweeting rants such as “kill them FBI.”  Abdulkadir was arrested December in Minneapolis.

Somali authorities have captured three Americans serving for Al Shabaab in East Africa in the past year. One, Maalik Jones, was brought back clandestinely to the U.S. to stand trial. But with an estimated 40 American Islamist militants still running around Somalia free today, the concern is that soon these American terrorists will come home, and try to wreak fundamentalist havoc in the U.S.

Al Shabaab -- whose name means “The Youth” in Arabic -- was forged in the years of anarchy that engulfed Somalia after warlords ousted dictator Siad Barre in 1991. Inspired by a Saudi-style Wahabi, or ultra-orthadox version of Islam, Al Shabaab now numbers an estimated 7,000 to 9,000 fighters.

It controlled Mogadishu, and briefly aligned Al Qaeda in 2012 in a bid to impose Sharia law on Somalia's urban centers, but infighting over tactics doomed the deadly union.

In June 2014, Al Shabaab fighters stormed the Kenyan village of Mpeketoni, about 60 miles from the Somali border, and murdered 48 people for not being Muslim. The following month, they attacked the palace of President Hassan Sheikh Mohamud in Mogadishu, and entered the heavily fortified compound before government forces killed the militants.

The deadly terror sect also was responsible in September 2013 for the infamous attack at the Westgate Shopping Center in the Kenyan capital of Nairobi, where 67 people were killed and more than 175 wounded.

The group has publicly vowed to carry out terror attacks in Kenya in response to that country’s military actions in Somalia, and appears to be making another move into the Somali capital.