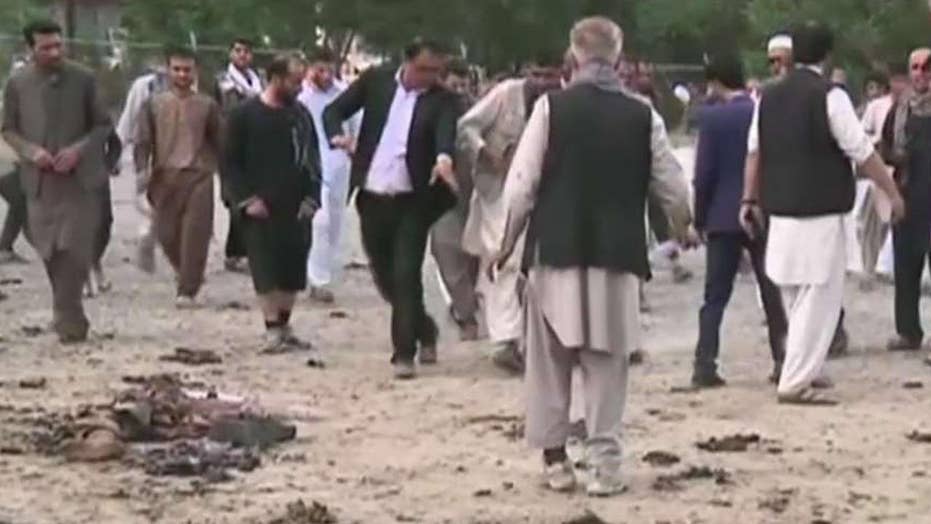 At least 19 people have been killed by explosions at the funeral for a politician's son who died in violent clashes in the Afghan capital Kabul.

The series of blasts happened as government officials - and reportedly members of parliament - were attending the burial of Mohammad Salim Ezadyar.

Scores are said to have been wounded.

The Taliban denied involvement and blamed rivalries in the government.

Ezadyar, whose father Alam is deputy speaker for the upper house of the Afghan parliament, was one of at least four people killed in confrontations between protesters and riot police in Kabul on Friday.

More than 1,000 demonstrators gathered on Friday near the site of a bomb blast in the capital earlier in the week, calling for the resignation of the Afghan government, and the stand-off was continuing on Saturday.

Pressure has been increasing on President Ashraf Ghani and his administration, which has been powerless to stop a string of attacks in Kabul that have killed hundreds of civilians in recent months.

Wednesday's bomb attack - at the start of the Muslim holy month of Ramadan - was one of the worst in the Afghan capital since the US-led campaign against the Taliban in 2001.