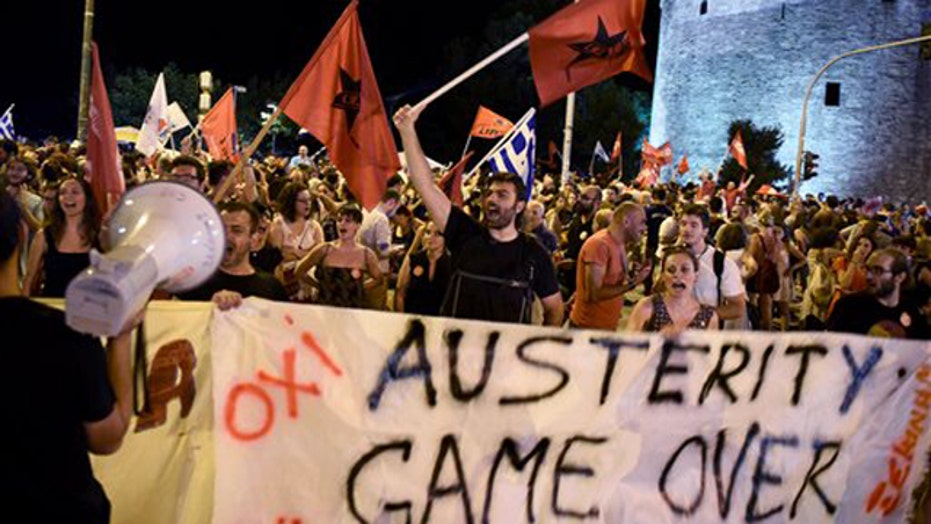 ATHENS, Greece – Greeks awoke Monday to the stark reality of the country's accelerating crisis — shuttered banks and ATMs with little cash — hours after they voted resoundingly to reject more austerity measures in exchange for another bailout.

The results — 61 percent voted "no," compared with 39 percent for "yes" — left the bankrupt country's future in the European Union and its euro currency uncertain.

Thousands of jubilant government supporters celebrated in Syntagma Square in front of Parliament, waving Greek flags and chanting "No, no, no!"

The margin of victory for "no" was far wider than expected. But as celebrations died down early Monday, Greece entered a second week of severe restrictions on financial transactions and faced the prospect of even limited amounts of cash drying out, with no prospect of an immediate infusion. Greece imposed the restrictions to stem a bank run after the vote was called and its bailout program expired.

A meeting between Greek Prime Minister Alexis Tsipras and the leaders of six of the seven parties represented in Parliament began at 10:30 am local time at the presidential palace.

Tsipras requested Monday's meeting shortly after the austerity referendum results showed a clear victory for the "no" camp. He said he aimed to share his strategy for negotiations with creditors on a new bailout deal and call for support.

Asian markets mostly fell Monday, as economists said the markets were not expecting such a decisive "no" vote and that could send stocks downward.

Besieged by a prolonged recession, high unemployment and banks dangerously low on capital, Greece defaulted on an International Monetary Fund loan repayment last week, becoming the first developed nation to do so. Now some analysts wonder if Greece is so starved of cash that it could be forced to start issuing its own currency and become the first country to leave the 19-member eurozone, established in 1999.

It was a decisive victory for Tsipras, who had gambled the future of his 5-month-old coalition government — and his country — in an all-or-nothing game of brinkmanship with Greece's creditors from other European countries that use the euro currency, the International Monetary Fund and the European Central Bank.

The European Central Bank's governing council was not expected to provide more liquidity assistance to Greek banks Monday. The assistance, now at about 90 billion euros, has been maintained but not increased in past days, leaving the country's financial system in a stranglehold. Without an increase, Greeks probably will not be able to withdraw even the meager 60 euros ($67) allocated per day.

That will make it difficult for Tsipras to keep his pledge, expressed on TV and on his twitter account, that Greece's "immediate priority is to restore our banking system's functioning & economic stability" or for banks to re-open Tuesday, as scheduled.

"Today we celebrate the victory of democracy," Tsipras said in a televised address to the nation, describing Sunday as "a bright day in the history of Europe."

"We proved even in the most difficult circumstances that democracy won't be blackmailed," he said.

Tsipras called the referendum last weekend, saying a "no" vote would strengthen his hand to negotiate a better deal for his country. His government has said it believes it would be possible to conclude a deal with creditors within 48 hours.

But European officials and most of Greece's opposition parties painted the referendum as one of whether country kept using the euro currency — even though that was not the convoluted question asked on the ballot. Opinion polls Friday showed that 74 percent or more want their country to remain in the euro.

"Given the unfavorable conditions last week, you have made a very brave choice," Tsipras told Greeks in his address. "But I am aware that the mandate you gave me is not a mandate for rupture." He said he would seek to negotiate a viable solution with the country's creditors.

How European officials react to the referendum result will be critical for the country, and a eurozone summit was called for Tuesday evening to discuss the situation.

German Chancellor Angela Merkel and French President Francois Hollande spoke to each other Sunday night and agreed "that the vote of the Greek people must be respected," Merkel's office said.

The referendum result was "very regrettable for the future of Greece," said Jeroen Dijsselbloem, head of the eurozone finance ministers' meeting known as the Eurogroup, which also will meet Tuesday.

Dijsselbloem, who is finance minister for the Netherlands, had been a steadfast opponent of Greece as it sought better conditions during five months of bailout talks.

"For recovery of the Greek economy, difficult measures and reforms are inevitable," he said. "We will now wait for the initiatives of the Greek authorities."

Sigmar Gabriel, Germany's vice chancellor and economic minister, told a German newspaper the Greek government was leading its people "onto a path of bitter austerity and hopelessness."

Tsipras has "torn down the last bridges, across which Europe and Greece could move toward a compromise," Gabriel told the daily Tagesspiegel. "By saying 'no' to the eurozone's rules, as is reflected in the majority 'no' vote, it's difficult to imagine negotiations over an aid package for billions."

Belgian Finance Minister Johan Van Overtveldt was somewhat softer in his reaction, saying a "no" result "complicates matters," but that the door was open to resume talks immediately.

"What we certainly don't want to do is to take decisions that will threaten the monetary union," he told Belgium's VRT. "Within that framework we can start talks again with the Greek government, literally, within hours."

Finland's finance minister says Greece will need to conduct extensive reforms no matter what happens next and says that "the ball is now in Greece's court."

Alexander Stubb said on his website Monday that's it up to the Greek government to decide what Sunday's referendum vote against creditors' previous proposals means in practice. He stressed that "the instruments and rules for the stabilization of the eurozone remain unchanged."

Stubb says that the near future will be very difficult for Greece and mending the economy will require extensive reforms.

He added that "negotiations can only be resumed when the Greek government is willing to cooperate and commit itself to measures to stabilize the country's public economy and implement the structural reforms required for debt sustainability."

Time has run out for Greece, which is dealing with an economy in a protracted recession, with high unemployment and banks dangerously low on capital.

The international bailout — under which it received nearly 240 billion euros in rescue loans — expired last week, on the same day Greece defaulted on an IMF repayment, becoming the first developed nation to do so.

Of critical importance will be whether the European Central Bank decides to maintain its current lifeline to Greece in the form of emergency liquidity assistance, or ELA. The assistance, currently at around 90 billion euros, has been maintained but not increased in past days, leaving the country's financial system in a stranglehold.

Sunday's vote was held after a week of capital controls imposed to halt a bank run, with Greeks restricted to a daily cash withdrawal maximum of 60 euros ($67). Long lines have formed at ATMs, while pensioners without bank cards have thronged the few bank branches opened to allow them access to a maximum 120 euros for the week. Queues at ATMs swelled again as the initial results of the referendum came in.

The ECB operates on rules according to which it can only continue ELA funding if Greece is in a bailout. Without an increase, it is unclear how much longer people will be allowed to withdraw 60 euros per day.

Some analysts say Greece is so starved of cash that it could be forced to start issuing its own currency. No country has ever left the 19-member eurozone, established in 1999.

The margin of victory was far wider than expected, and is likely to strengthen the young prime minister's defiance toward Europe. Tsipras was voted into office in January on a promise to repeal bailout austerity.

"This victory for the 'no' camp will unfortunately embolden the government, but is likely to do little to convince the creditors that Tsipras is a trustworthy negotiating partner who has any ability to implement a deal," said Megan Greene, chief economist of Manulife Asset Management.

"Any deal for Greece will involve a much larger fiscal adjustment than the one on which Greeks voted today. I don't think that Germany in particular will be willing to make any concessions for Tsipras."

There was confusion Sunday night over the fate of bank safety deposit boxes, with Deputy Finance Minister Nadia Valavani saying people would be allowed to remove items but not cash from them, and Alternate Finance Minister Dimitris Mardas later said the issue would have to be legislated.

Yiannis Gkovesis, 26, waved a large Greek flag in the capital's main square with supporters of the "no" vote.

"We don't want austerity measures anymore. This has been happening for the last five years and it has driven so many into poverty, we simply can't take any more austerity," Gkovesis said.

Constantinos Papanikolas, 73, who also clutched a Greek flag, said the result meant "a fresh start, a new page for Greece and for Europe, which has condemned its people to poverty."

Opposition conservative New Democracy lawmaker Vangelis Meimarakis said he was expecting Tsipras to keep his pledge for a quick deal.

"If we don't have an agreement within 48 hours as the prime minister promised, then we are being led to a tragedy," he said.