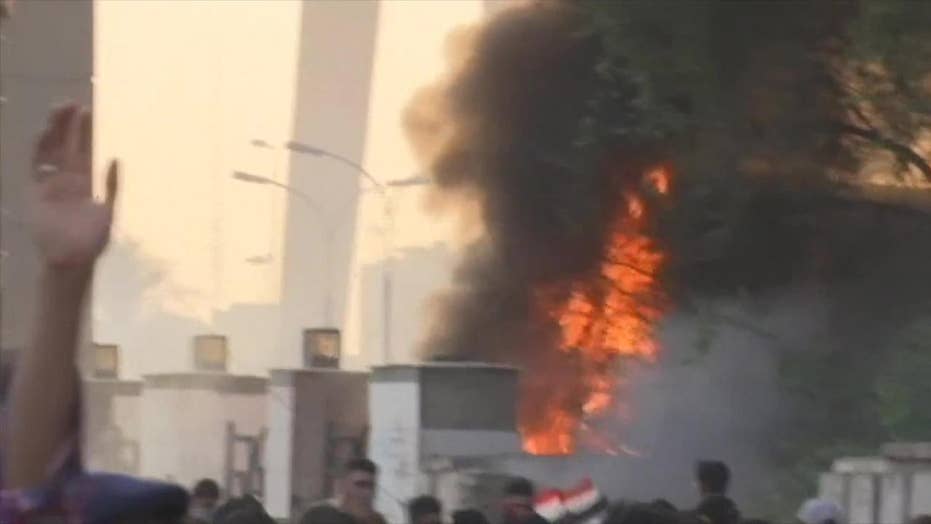 Five dead as protestors and security forces clash in Baghdad

Nine people were killed and hundreds more wounded over the past two days as antigovernment protests turned violent in Iraq.

Seven died in Wednesday’s protests, three in Baghdad and four in Nasiriyah, while some 132 were wounded. Two more died in Tuesday’s protests -- more than 200 were hurt -- as demonstrators and Iraqi security forces clashed in the largest public outcry since Iraqi Prime Minister Adel Abdul Mahdi’s government was formed a year ago.

Amid the hectic demonstrations, a 10-year-old girl was killed by a car speeding away from a checkpoint.

An injured protester is carried off during a protest in Baghdad, Iraq, on Tuesday. (AP Photo/Khalid Mohammed)

Thousands have taken to the streets in recent days to express anger over unemployment, a lack of government services such as electricity and water, and rampant corruption in the oil-rich nation. The unemployment rate in Iraq for 2018 stood at 7.9 percent, according to World Bank data.

Hundreds of heavily armed security forces and riot police deployed on Baghdad streets. They opened fire on demonstrators and launched tear gas to disperse rioters. Guards blocked all major intersections leading to a central square on Wednesday to prevent a repeat of Tuesday’s protests.

On Tuesday, more than 1,000 descended upon central Tahrir Square as some tried to cross the bridge to reach the fortified Green Zone, home to government offices and foreign embassies.

A protester stands in the street during a demonstration in Baghdad, Iraq on Tuesday. (AP Photo/Hadi Mizban)

By midafternoon on Wednesday, residents said authorities had shut down social media platforms such as Facebook, Twitter and WhatsApp. The protests appear to be organized on social media without any political leadership.

The protests began peacefully on Tuesday, but after security forces fought back with tear gas, water cannons and live ammunition, protesters reacted by throwing stones and setting tires and trash cans on fire.

Tahrir Square, Baghdad’s major commercial center, was a ghost town over the past two days as all shops and restaurants closed down.

Protests spanned across at least seven other provinces in the country. An estimated 3,000 protesters took to the streets in the southern city of Basra on Wednesday evening.

Both the United Nations and the U.S. Embassy in Baghdad have expressed concern over violence ramping up amidst the demonstrations. The United Nations called on authorities to exercise restraint. “Every individual has the right to speak freely, in keeping with the law,” U.N. Special Representative Jeanine Hennis-Plasschaert said in a statement.

“The right to demonstrate peacefully is a fundamental right in all democracies, but there is no place for violence in demonstrations from any side,” the U.S. Embassy in Baghdad posted on Twitter.