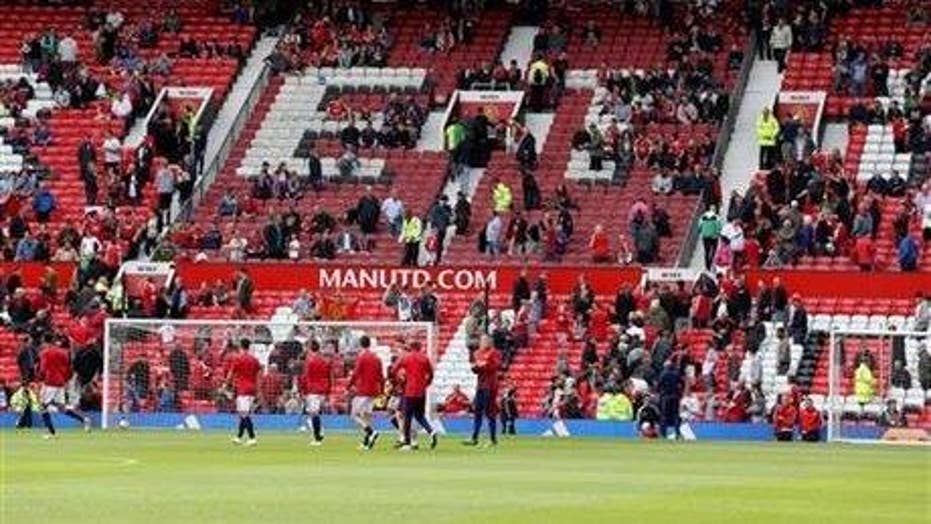 Police cleared the area to carry out a controlled explosion

An "incredibly lifelike explosive device" that spurred the evacuation of a 75,000-seat British soccer stadium on Sunday had been left in the stadium during an earlier security exercise, police said.

The device was discovered before a Premier League match began at Old Trafford stadium in Greater Manchester.

An army bomb disposal unit conducted a controlled explosion on the "suspect package" but ultimately found it "wasn't viable," Greater Manchester Police announced on Twitter after the match between Manchester United and AFC Bournemouth had been postponed.

A European security official said the suspicious item at Old Trafford coincided with increased chatter about threats to sports stadiums and other targets which would draw considerable crowds.

“The terror threat level associated with Irish dissidents has been raised recently due to credible threats we've been monitoring,” said the official, who spoke on condition of anonymity because he wasn't authorized to speak about ongoing investigations.

Last week, British officials raised the threat level regarding a possible attack on the mainland by Irish Republican dissidents, upping the threat level from “moderate” to “substantial.” That means an attack was viewed as a “strong possibility.”

Two stands inside Old Trafford — The Sir Alex Ferguson Stand and the Stretford End — were evacuated about 30 minutes before the scheduled kickoff time of 3 p.m. Fans in other stands initially had been allowed to stay inside the stadium, but eventually a full “controlled” evacuation was carried out.

“We don’t make these decisions lightly and we have done this today to ensure the safety of all those attending,” O’Hare said.

The rest of the Premier League games being played on Sunday, the final day of the season, went ahead as scheduled.

“The Premier League will seek to rearrange the fixture as soon as practically possible and will advise fans accordingly,” a statement from the Premier League said. “It is always the last resort to abandon one of our fixtures and while we apologize for the inconvenience cause to fans we are sure, in the circumstances, they will appreciate the need to do so.”

Security at Premier League stadiums was increased after the Paris attacks that killed 130 people in November, which involved three teams of attackers who blew themselves up or sprayed gunfire at the Stade de France sports stadium, cafes and bars, and the Bataclan concert hall.