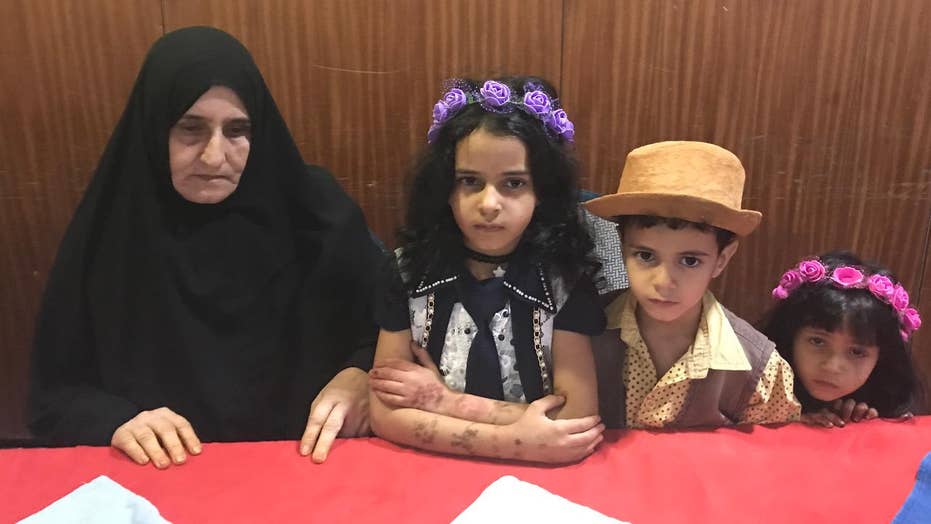 Yemen’s women risk their lives for release of tortured kids

A look inside the Yemen's Abductees' Mothers Association, which is comprised of mothers, wives, sisters, daughters and passionate activists intent on bringing awareness to the burgeoning crisis of imprisonment and alleged torture of men and children.

Almost 100,000 people have been killed since 2015 as the Yemen war rages on, according to new data unveiled by the Armed Conflict Location and Event Data Project (ACLED).

The new report – which has collated statistics in partnership with the Yemen Data Project – charts the number of civilian deaths since the beginning of the Saudi-led coalition intervention in their neighboring country in March 2015. The air-centered bombing campaign came in response to Iran-backed Houthi militias, who months earlier overtook strategic swaths of the country from government hands, including the capital Sana’a.

A civilian left for dead near his home in Sana'a, Yemen (Fox News/Hollie McKay)

It credits this year’s slight dip in the death toll as a result of a UN-brokered ceasefire in the key port city of Hodeida agreed upon late last year. But such a deal has since fallen apart.

“Since the escalation of the conflict, Yemen has been devastated by war,” stated ACLED Executive Director Clionadh Raleigh stated. “These data are both a tool and a warning; the international community must use them to understand, monitor, and ultimately resolve the conflict before the situation spirals even further out of control.”

The analysis group, which receives funding from both the U.S. State Department and Dutch Foreign Ministry, pegs the majority of the blame for the civilian deaths on direct targeting, estimating that “around 67 percent of all reported civilian fatalities over the last four-and-a-half years have been caused by the Saudi-led coalition airstrikes.”

Taiz – which has long been under siege by Houthi factions – has been deemed Yemen’s most violent governorate, followed by Hodeida and Al Jawf.

The fatality numbers referenced does not include the many thousands slain in conflict-related civilian fatalities, namely from starvation and cholera due to lack of nutrition and medical access.

In this Aug. 12, 2018, file, photo, A child injured in a deadly Saudi-led coalition airstrike on Thursday rests in a hospital in Saada, Yemen. A database tracking violence said Wednesday, June 19, 2019 that at least 91,600 people have been killed in Yemen’s civil war, presenting a new estimate after completing reporting for the first months of fighting in 2015.  (AP)

Indeed, the UN has for more than a year declared it to be “the world’s worst humanitarian crisis,” and it is set only to worsen.

David Beasley, head of the Union Nations World Food Program (WFP) cautioned earlier this week that they were likely going to suspend aid in Houthi-mandated areas, beginning in the coming days – citing the deviation of aid and a lack of independence, rendering them unable to do their job.

“We are now assisting, feeding over 10 million people per month but I cannot assure you that all the assistance is going to those who need it most,” Beasley said, according to Reuters, highlighting that a particular bone-of-contention was that the Houthis were not allowing them to register people in need and establish a biometric system to help with delivery.

Houthi representatives have previously called the biometric data system as being illegal in Yemen.

The war is viewed by much of the international community as something of a proxy war between Saudi Arabia and Iran, with Tehran purporting to spread its footprint closer and closer to Riyadh.