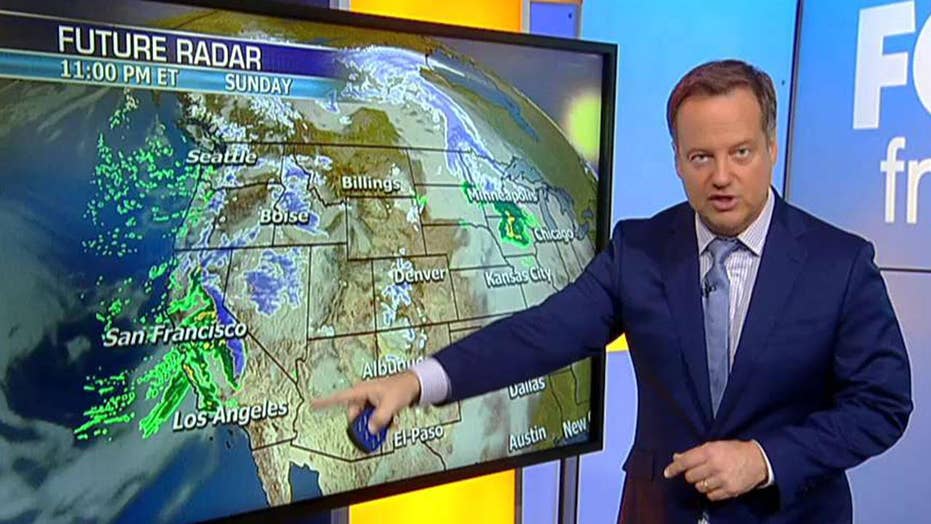 Hundreds of thousands of people are without power in Washington state on Sunday after an intensifying storm system brought ferocious winds to the region.

The National Weather Service's office in Seattle warned that a "quick strong burst of wind" was incoming and affecting the Seattle-Tacoma metro area between 2 a.m. and 4 a.m. P.T.

Wind gusts of 60 mph were reported at SeaTac Airport, while a gust of 58 mph was measured at Joint Base Lewis–McChord, located south of Tacoma.

"One of the windiest storms we've seen in probably over a decade," Fox News Chief Meteorologist Rick Reichmuth said on "FOX & friends."

The strong winds knocked out power for more than 320,000 people at the height of the storm.

Puget Sound Energy reported more than 200,000 customers were still without power, while Seattle City Light reported as many as 40,000 outages at one point before the number was down to 20,000, according to Q13 FOX.

Numerous roads were also closed due to downed trees and powerlines.

The West Thurston Fire Department said on Facebook the "quick but damaging storm" in a short two-hour timeframe had left several roads impassable.

The NWS said conditions in the region have since improved.

The wild winds also had impacts on air travel. Alaska Airlines flights are back in the air Sunday morning after a nationwide ground stop that was apparently caused by a power outage.

Numerous roads were closed throughout the region after strong winds brought down trees and power lines. (West Thurston Fire Department)

The airline said all its flights were grounded between about 4:20 a.m. and 5:15 a.m. after a power outage in the Seattle area, where the airline's operations are based.

Airline spokeswoman Oriana Branon told the Associated Press the power went out around 3:30 a.m. and came back on about an hour and a half later. Brannon said that 27 flights were delayed and five were canceled.

Customers inconvenienced by the outage are being offered compensation on a case-by-case basis, according to Brannon.