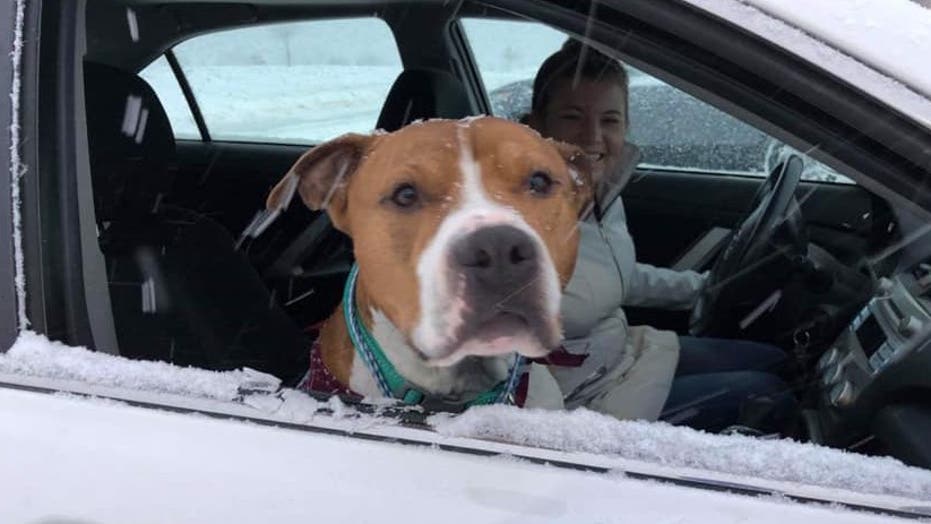 A Montana dog, who was stolen from his owner in October, was recently found more than 2,000 miles away in West Virginia and — with the help of a group of volunteers - was reunited with his family.

Zeus, a 9-year-old pit bull from Butte, was taken from his home after his owner, Cassandra Rasmussen, allowed a family friend to stay with them, and came home to a house without Zeus.

"It seems Cassandra who is a single mom in Butte, Mont., allowed a family friend to come stay with her for a bit," Chelsea Staley, with the Kanawha Charleston Humane Association, told WOWK-TV. "The 'friend' basically robbed her blind, stole her wallet, a number of things while she was at work including her dog, Zeus."

PENNSYLVANIA DOG AT SHELTER FOR OVER 900 DAYS HAS ONE CHRISTMAS WISH: TO GET ADOPTED

Losing the dog took a huge toll on Rasmussen and her two daughters — and the mother said all they wanted for Christmas was to have Zeus back in their arms.

Months later, the person who took the pooch was arrested in Nitro, W.V., and had Zeus with him. He was brought to the Kanawha Charleston Humane Association, where they discovered Zeus was microchipped and registered to Rasmussen.

The shelter planned to send Zeus home to Montana, but thought he was "too big" to fly commercially at 73 pounds. So, the animal rescuers contacted Many Paws Volunteer Transport to try to get Zeus home.

Ultimately, more than a dozen volunteers helped drive thousands of miles from eastern to northwest America to get Zeus home, the local Humane Association wrote on Facebook. They took the trip in turns over the course of four days and he made it home Dec. 16.

“It’s wonderful, this is a great experience, a great opportunity to show the people and communities across the United States offering to help jumping on this to help reunite this dog with its family,” Jenn Robles, a volunteer with the animal transport group, told the news outlet.

Robles added to KTMF it took “15 volunteers, three ‘slumber pawties,' nine states and 2,000 miles” to get Zeus home with his family, just a week before Christmas.