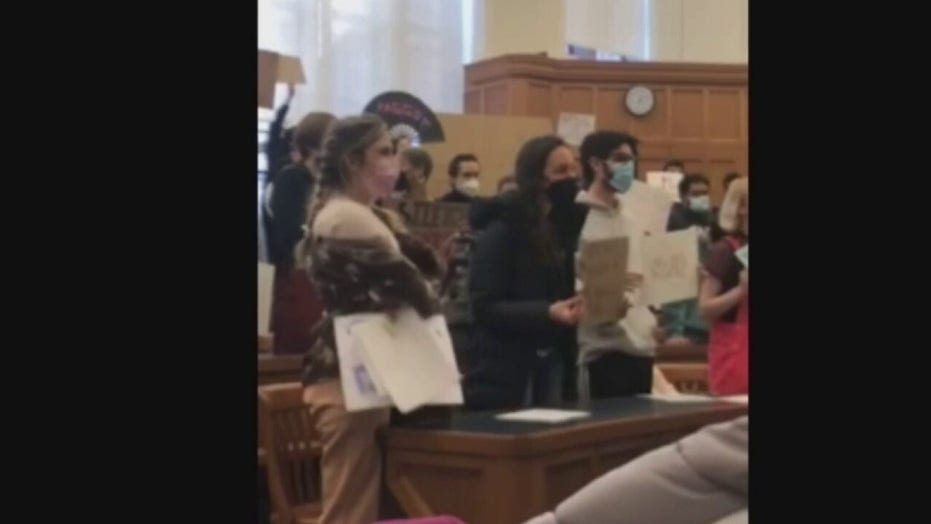 A free speech expert says Yale Law School should students who disrupted a free speech panel on March 10 accountable for their actions.

Around 120 student protesters showed up at the event with signs reading "f--k fascists," "tired of this sh--," and "be less mean." According to the Yale Daily News, Zack Austin, president of Yale's Federalist Society chapter and Waggoner both said that the protesters were disruptive and inappropriate, which the protesters dispute.

In audio from the event released by Alliance Defending Freedom, several audience members were yelling over the speaker at the event.

"Protect trans kids," students could be heard shouting during the event.

One Yale Law School student who attended the event said on Twitter that he could "hear virtually none of it the entire time," due to the protesters.

"It is apparent that many students do not understand fundamental principles of free speech. The fact that a free speech event was disrupted by law students shows how rampant this issue actually is. Universities need to take responsibility as institutions of education and actually educate students about speech rights in America," Trump said.

She added that Yale Law School should "condemn" these kinds of activities by protesters who attempt to block others from speaking.

"Even more so, when their students actively try to squash the speech rights of their fellow peers, universities should condemn these activities and call them out for suppressing speech," Trump said.

According to the report, Yale Police Department Assistant Chief Anthony Campbell said that six police officers were at the event "not to enforce YLS policy but rather to protect the safety of the demonstrators and those they were protesting."

In a statement to Fox News Digital, a Yale Law School spokesperson said that it has a free speech policy, but didn't elaborate on if the protesters would be contacted by administrators for their actions.

"We then work with the police to determine the appropriate level of support for the particular visitor and/or event," the spokesperson said. "The Law School follows the University’s free speech policy and procedures, which includes a three strikes rule. As soon as the moderator read the University’s policy for the first time, the students exited the event, and it went forward. Members of the Administration are nonetheless in serious conversation with students about our policies, expectations, and norms."