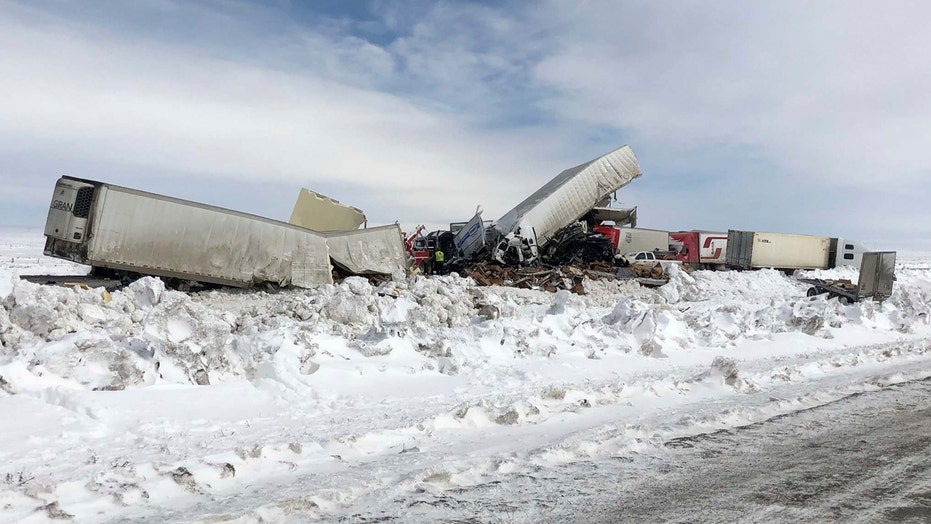 More than 100 vehicles were involved in a series of crashes over the weekend on an interstate in Wyoming that left three people dead and dozens injured, officials revealed on Monday.

The Wyoming Highway Patrol said in a news release that the crashes began around 3:39 p.m. Sunday around milepost 181 and 184 on Interstate 80 near the city of Rawlins, about 180 miles west of Cheyenne.

"Weather is reported to be a factor in these crashes," police said.

The 100-vehicle pileup, and another one nearby around the same time involving 40 vehicles, happened in snowy, blustery weather. A photo released on Monday showed wrecked, mangled tractor-trailers still on the roadway.

About 30 people were taken to the emergency room at Memorial Hospital of Carbon County in Rawlins, hospital spokeswoman Stephanie Hinkle told the Casper Star-Tribune.

Officials at the 25-bed hospital expected more injured pe ople to arrive Monday. They called in three extra doctors and set up a temporary patient holding area in a cafeteria.

The smaller pileup, on I-80 just 4 miles away from the larger pileup, injured at least seven people, including one person who was hospitalized in critical condition, Sweetwater County Sheriff's Office spokesman Jason Mower said.

A video posted to YouTube by David Cuarezma showed the aftermath of the crash. Cuarezma described I-80 as the "most dangerous road in United States." In the video, the wreckage of semi-trucks and other debris can be seen on the roadway.

Trucks can be seen parked in the area of a major pileup on Interstate 80 in Wyoming on Monday. (Wyoming Department of Transportation)

A 200-mile stretch of westbound I-80 from Laramie to Rock Springs was still closed Monday and Wyoming Department of Transportation officials did not expect it to reopen until sometime on Tuesday.

Forecasters predicted snow driven by wind up to 50 mph would continue affecting travel throughout the day.

Travel throughout the region still remained difficult Tuesday morning as the Wyoming Department of Transportation said that "rolling closures" were in effect.

According to WYDOT, the rolling closures are designed to manage the impact of stranded travelers in small towns along the route with "limited resources in terms of parking, fuel, hotel rooms and other amenities."

"When a town is at capacity, which can happen during a long-duration closure, the closure will be rolled back to the next town to avoid stranding travelers in a location without adequate services," WYDOT said.