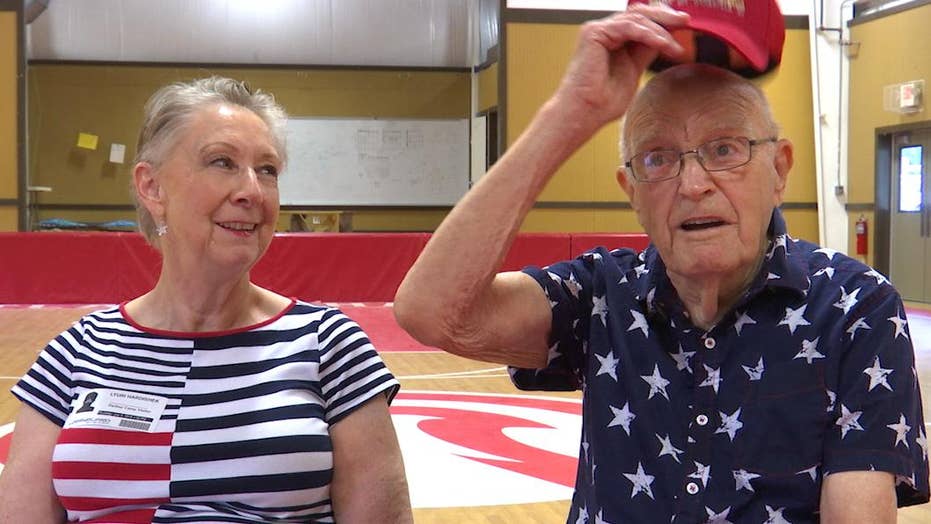 Despite countless ups and downs, 96-year old veteran Francis Turner has purposed his life to helping others.

WINDER, Ga. – His eyes filling with tears, though not one shed, WWII veteran Francis Turner reflected on the major moments of his 96 years.

“The driver made a turn I didn’t expect,” Turner said, describing the seconds before he slammed head-first into a windshield en route to an event in Germany during his military service.

Turner has lived a life plagued with challenges: Sustaining a severe head and knee injury in war, battling post-traumatic stress disorder (PTSD), facing near homelessness and raising three children with Down syndrome — all of whom have died, along with his wife.

In an old photograph, Francis Turner poses with his three sons, each diagnosed with Down syndrome. (Francis Turner)

But despite countless ups and downs, Turner has dedicated his life to helping others – which in turn, has helped him fend off bouts of anxiety and depression connected to his PTSD.

Up until a few years ago, the 96-year old tutored children in Georgia.

More recently, he devoted his time to raising money for Camp Corral, which provides a week of free outdoor activities to kids of injured, ill or fallen military service members. The non-profit was founded in 2011 by chain restaurant Golden Corral.

“My father, who was in the Marines in WWI, told me to always help other people if I could,” Turner recalled.

He said having a big heart runs in the family – a quality that nurse Lyuri Hardishek spotted, even in one of Turner’s most difficult periods.

Hardishek said “it became really apparent that he had no support system” and that his PTSD had essentially paralyzed him.

So, 20 years ago, Turner and Hardishek unofficially adopted each other as family.

Hardishek has watched Turner's life transform over the past two decades. While PTSD will always impact him, Hardishek said chores, exercises and volunteer work have allowed Turner to regain control of his life.

A group of campers and counselors staying in Mr. Turner's honorary cabin pose for a picture, thanking the WWII veteran. (Fox News)

“In the beginning, I never thought I’d take such good care of him, that we’d be doing so well at this point,” she chuckled.

Greeted by a standing ovation, Turner visited a Camp Corral site in Georgia for the first time this summer, armed with stories and smiles.

In the past five years, he helped his Disabled American Veterans chapter raise $26,000 for the Just Be Kids campaign. Those donations pour into Camp Corral, funding nearly 40 campers and even earning Turner an honorary cabin.

“With our partners at Golden Corral, the work disabled veterans like Mr. Turner are doing gives children who share the burdens of our national defense an opportunity to just be kids and connect with others who share their experiences,” said Bryan Lett, a spokesperson for DAV.

While riding on the back of a golf cart, Turner waved to kids emerging from their cabins as their rest period ended.

Kids shouted, “Thank you for your service” and “Hi, Mr. Turner.”

“It was a rare moment for these kids to celebrate him,” camp coordinator Dorcas Tomasek said. “I can’t even put words into it. It was really a powerful moment.”

Tomasek has been involved in camps for nearly three decades. She recognized the power in bringing people together from similar experiences.

This year, those connections crossed generations.

Simone Ziller, 15, said it was an honor to hear Turner describe what military life was like in another era.

“For him to raise money and try to put this camp together for us is really incredible,” Simone said.

Camp Corral reported nearly 1 in 4 children in military families have considered suicide. Turner called them the forgotten victims of war, which is why the non-profit’s mission resonated so deeply with him.

But the kids are not the only ones reaping the benefits of Turner’s hard work.

Hardishek said since visiting the campsite, Turner has referenced his experience frequently – pulling him out of the hovering darkness from PTSD and giving him a rejuvenated purpose, a broader smile and even more pride in being an American.

“He made a comment to me about a year ago. He said, ‘I can remember when I was young, I wanted to live as long as possible to help as many people as I could,’” Hardishek said.