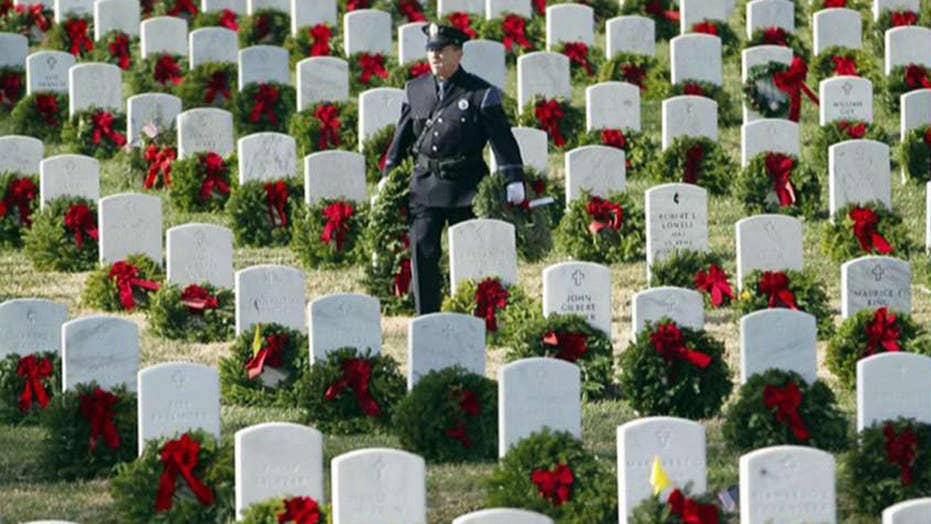 Wreaths Across America reaches goal with help of FNC viewers

Every grave at Arlington National Cemetery will be covered.

It's a long-running tradition: providing seasonal wreaths for veterans' gravesites at Arlington National Cemetery. Still, it looked as though more than 35,000 graves were going to start the holidays without a wreath this year.

But on Thursday, the nonprofit Wreaths Across America announced it had met its goal — with some timely aid from the public. “We are able to place a wreath at every single veteran’s grave at Arlington National Cemetery this year,” Bre Kingsbury, of Wreaths Across America, told “Fox & Friends.”

Volunteers for the Maine-based nonprofit organization have placed a wreath at every U.S. veteran’s tombstone at Arlington National for a quarter-century. This year, the organization feared it would fall short.

Kingsbury appeared on Fox News last week, appealing to viewers for help to complete the tradition.

Though the group met its goal, Kingsbury said there’s still a need for volunteers to place the wreaths on about 400,000 tombstones in Arlington on Saturday.

Kingsbury called the tradition “a celebration of life,” and noted that throughout the years, families and friends have joined in on the ceremony.

Kingsbury said the volunteers are also needed at the 1,300 other cemeteries that are part of the veterans’ remembrance wreaths program, including New York’s Long Island National Cemetery and Minnesota’s Fort Snelling National Cemetery.

“Now that we are so blessed to have enough wreaths at Arlington, and at many of our other 1,300 participating locations across the country … now it’s all about volunteering,” Kingsbury said.

For more information on how to help out, go to WreathsAcrossAmerica.org.

CORRECTION: An earlier version of this article stated that Fort Snelling National Cemetery was in Michigan. It is in Minnesota.