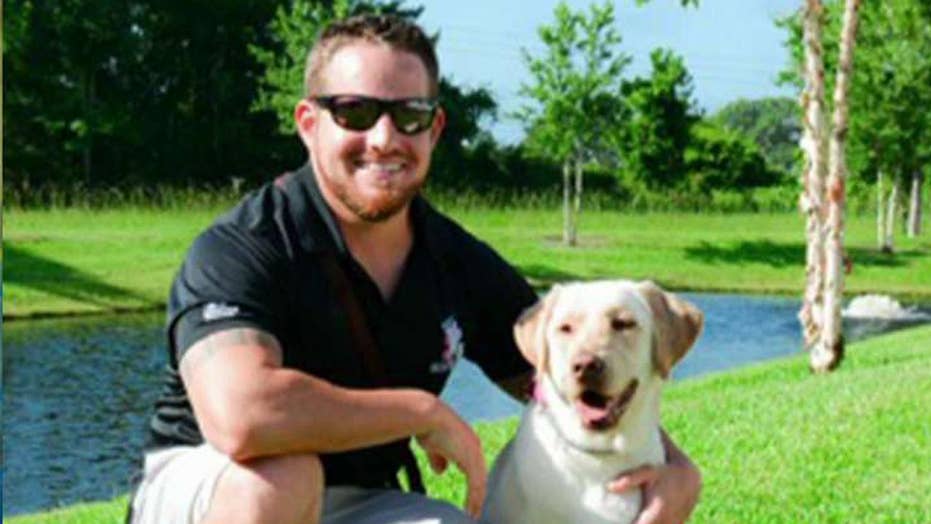 Veteran says he will lose job if he brings service dog

An ex-Marine awarded a Purple Heart after being wounded in combat says his bosses won’t let him come to work with his trained service dog.

“I was told by my supervisor that HR said that if I showed up with the dog I’d be fired,” Yaunce Long told Fox & Friends Saturday.

Long said he installs phone lines for Cincinnati Bell in Ohio. He has a service dog, named C4, to help him control anxiety caused by post-traumatic stress disorder (PTSD). He was diagnosed with the condition after a 10-year stint in the Marines in Afghanistan and Iraq. He was with counter-intelligence.

Long said that each day for a week he was sent home without pay when he showed up with C4.

“Basically, they’ve treated the dog as if it's an option,” he said.

Long said he has requested an accommodation under the Americans with Disabilities Act.

“I’ve pleaded with the company,” he said. “I’ve gone through all the necessary paperwork. I provided everything that they asked for and I even followed up with them to make sure I had everything in proper order because I wasn’t sure of the process either.”

He said his application has languished for months because the company is stonewalling.

“Despite repeated effort we have yet to receive any information regarding the current status of Yaunce’s condition and its effect on his ability to perform his duty,” Cincinnati Bell told Fox & Friends.