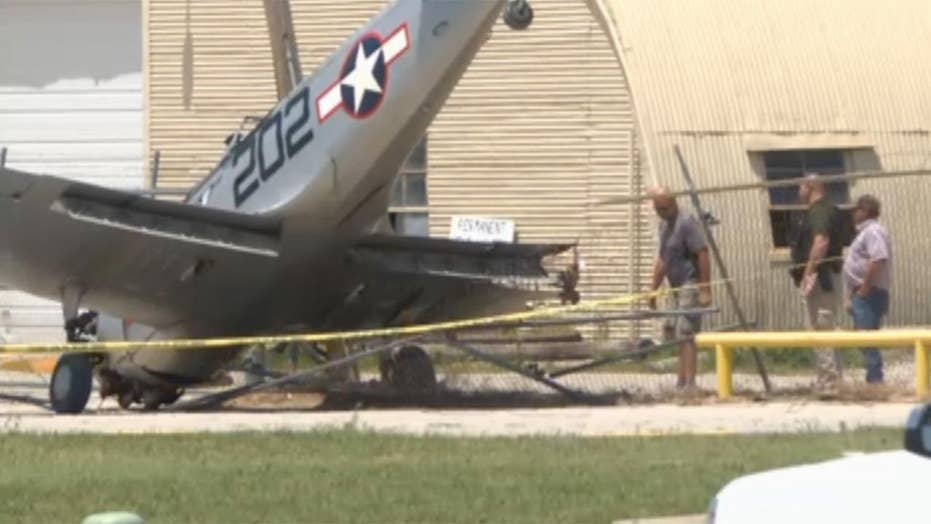 Raw video: Pilot and passenger suffer minor cuts in crash where plane struck a pole and broke off a wing in Wichita, Kansas.

The Kansas State Highway Patrol said in a crash report the pilot ran out of fuel while approaching the runway at Westport Airport in Wichita around 12:10 p.m. and attempted to restart the engine.

The aircraft's engine failed to start, and the plane went down in a nearby neighborhood, police said.

The 1943 Fairchild PT-23 was part of the Commemorative Air Force-Jayhawk Wing doing flyovers across the state, according to KWCH. The PT-23 was a trainer plane for the U.S. Army Air Force.

The pilot attempted to land the aircraft on a roadway, but struck a pole and the ground in the process.

Wichita Police Sgt. Kelly O’Brien told the Wichita Eagle the male pilot and female passenger suffered minor injuries and were taken to a hospital for stiches.

"Thankfully they missed the fueling vessels that are over there and there was no fire with the plane or anything else," he told the newspaper.

The Kansas Highway Patrol and Federal Aviation Administration are investigating the incident.