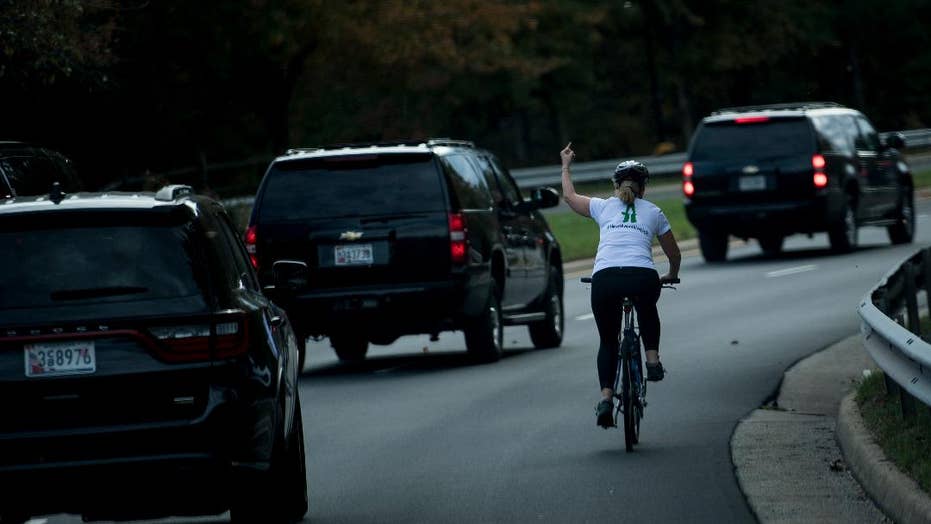 Woman fired after viral photo of her giving Trump the finger

Watch the video and see why a Virginia woman who gave President Trump’s motorcade the middle finger says she was fired from her job at a company that does work with the government.

The woman who flipped off President Trump's motorcade last month said Monday that she was fired on Halloween for violating her employer's code of conduct policy -- but she vowed she would do it all over again if given the chance.

Juli Briskman, 50, now an ex-member of the marketing team at the government contractor Akima LLC, was on her bicycle on Oct. 28 when Trump's motorcade drove by her on a northern Virginia road.

A photo that quickly went viral showed her raising the middle finger of her left hand in defiance as the motorcade returned from the Trump National Golf Club.

"My finger said what I was feeling," Briskman, who had been on the job for just over six months, told CNN. "I'm angry and I'm frustrated."

Briskman's face was not visible in the photo, but she claimed she immediately confessed her involvement to her employer the Monday after the photo went viral.

A woman on a bike gestures with her middle finger as a motorcade with US President Donald Trump departs Trump National Golf Course October 28, 2017 in Sterling, Virginia. (BRENDAN SMIALOWSKI/AFP/Getty Images)

Briskman said she was then promptly fired on Tuesday from the government contracting firm and escorted out of the building for violating the "code of conduct policy."

“They said, ‘We’re separating from you,‘” Briskman told the Huffington Post.  “Basically, you cannot have ‘lewd’ or ‘obscene’ things in your social media. So they were calling flipping him off ‘obscene.’”

Briskman, who claimed she was fired because her employer was worried about losing government contracts, said she has contacted the American Civil Liberties Union. She insisted she would flip off the president again if given the chance.

"Health care doesn't pass, but you try to dismantle it from the inside," Briskman told CNN. "Five-hundred people get shot in Las Vegas; you're doing nothing about it. You know, white supremacists have this big march and hurt a bunch of people down in Charlottesville and you call them good people."